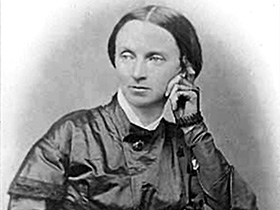 Swisshelm, an advocate against slavery and for feminism, was born near Pittsburgh in 1815. A strong religious background‚ coupled with marital strife‚ led her to becoming an extremely opinionated writer. Major achievements of her life include: reform in laws pertaining to married women's right to own property, the promotion of feminism in America through blatant and powerful criticism and reprisals, and the spread of sentiment against slavery. She also began several newspapers of which the St. Cloud Democrat was the most prominent. During the Civil War, Swisshelm served as a nurse, and before dying in 1884 wrote an autobiography.

Jane Grey Swisshelm was born in Wilkinsburg, Pennsylvania, in 1815. Brought up a Christian, a passion for religion led to early expertise in religious dogma. At the age of 12, she was sent to a boarding school with her cousin. After six months she was called home by her mother because of a brother's death. Jane was married in 1836 to James Swisshelm and in 1842 began writing short stories in local newspapers signing them Jennie Dean. Eventually her beliefs about slavery and feminism were put on paper in The Spirit of Liberty, an anti-slavery newspaper in Pittsburgh.

These beliefs were cemented by early childhood experiences of slave punishment, as well as marital strife. Her Christian background led her to believe that male superiority was unjust. Faith justified her will and undermined man's authority over what she believed to be right. In her autobiography, Half a Century (1880), she explains this by citing her mother's impending death. When her husband heard the situation, he commanded her to remain with him. After arguing religious doctrine with her spouse, specifically weather a husband should be able to control a wife's actions, she concluded that religion freed her from the male command. This belief was the basis of her life. All she's written is forged upon religious belief and has earned her many opponents through her career.

Marriage was the driving force that formed much of the feministic ideals that she believed in. Swisshelm was a victim of male domination until she came to realize the injustice that was present in society. One of the results of her marriage was her most important achievement, a bill that allowed women the ownership of property. This resulted when her husband claimed ownership indebted property left by her mother. Before this incident, law dictated that married women could not own property. Articles that she wrote in the Pittsburgh Commercial Journal addressed the issue; she made the situation known and used a persuasive example of the time to sway public opinion. The Pennsylvania legislature, in response to her articles and two related legal cases, passed a law that allowed married women to own property.

After this victory she went on to create several newspapers which revolved around abolition and the feminist ideal. The Pittsburgh Saturday Visitor in Pennsylvania, the St. Cloud Visiter and St. Cloud Democratic of Minnesota, and the Reconstructionist of Washington were found by Swisshelm. The St. Cloud Visiter was the most prominent of the papers, achieving the greatest impact on the promotion of feminist ideals. A book called Letters to Country Girls (1853)highlights the response that Swisshelm has to the problems women wrote to her about. Women in the area would send Swisshelm letters addressing inequality of which she would respond in the newspaper. At one point she states that "Ignorance, folly and levity, are more or less essential to the character of a slave" and this is the problem that faced women of the country.

After giving birth to her only child, a girl, years of oppression by her husband led Swisshelm to move to Minnesota in 1857. James Swisshelm hoped that his wife would return, but after years of waiting, got a divorce. In Minnesota, Swisshelm established the St. Cloud Visiter. Remarks addressing the bribery of a Democratic Party boss, Sylvanus B. Lowery, resulted in an attack on the newspaper and destruction of its printing press. Soon after, she started the St. Cloud Democratic, famous for correspondence that she had with local women about the female position. She questions male status and suggests that women should become educated and realize their worth. She states that "If women knew their rights, and proper places, we would never hear of men 'making their wives' do this, that, or the other."

During the years of the Civil War, Swisshelm served as a nurse in the army and provides detailed descriptions of her experience. In her autobiography, she communicates a desperate situation that the injured faced and the disbelief at her own futile attempts to quell the suffering. At one point, she is totally astonished to find that the lives of men with gangrene were ending because of a shortage of lemons. She moved back to Pennsylvania after the war and wrote Half a Century in 1880.

Following the war she went into retirement. The work of her earlier years which affected so many women and expressed powerful ideas did not reappear during her retirement. She died four years after her last literary work in 1884.