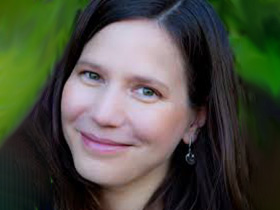 Poet, Mary Szybist was born in Williamsport, Pennsylvania, and earned English and Teaching degrees from the University of Virginia. She then went on to earn her MFA from Iowa Writers' Workshop, where she was a Teaching-Writing Fellow. Her first collection, Granted (2003), was a National Book Critics Circle Award finalist and winner of the 2004 Great Lakes Colleges Association New Writers Award. Incarnadine (2013), Szybist's second collection, won the 2013 National Book Award. She is also the recipient of two Pushcart Prizes, three fellowships, including from the Guggenheim Foundation, and additional awards and residencies. Mary Szybist has taught at Kenyon College, Warren Wilson College, and others. At the time of this writing, Szybist is an Associate Professor of English at Lewis & Clark College in Portland, Oregon.

Mary Szybist was born on September 20, 1970 in Williamsport, Pennsylvania, and questions whether the pronunciation of her name, SHE-bist, might be an Americanized version created by her great-grandparents, while the Polish pronunciation is something more like she-BIST, according to her interview with Alex Deuben of The Paris Review. "A Polish woman once told me that 'Szybist' means glassmaker or window maker," she tells Deuben. "I have no idea if this is true, and I haven't pursued the truth yet because I am fond of the idea..."

Szybist grew up in Pennsylvania and was raised Catholic. She earned a BA in English in 1992 and a Master's Degree in Teaching in 1994, both from the University of Virginia. She then went on to earn her MFA from Iowa Writers' Workshop in 1996, where she was a Teaching-Writing Fellow.

"When I was young," she tells Deuben, discussing the relationship between poetry and prayer, "I reached a point where I found myself unable to pray. I was devastated by it. I missed being able to say words in my head that I believed could be heard by a being, a consciousness outside me. That is when I turned to poetry." She also makes it clear that "Art is not religion, and neither can bring back the dead—at least not in the way that I want them back."

Her first collection, Granted (2003), a National Book Critics Circle Award finalist and winner of the 2004 Great Lakes Colleges Association New Writers Award, "explores the difficulties of faith and love," according to Amazon.com.

Incarnadine (2013), Szybist's second collection, is centered on the Annunciation — a biblical account of the angel Gabriel appearing to Mary to tell her she will be responsible for bearing the son of God. The collection, Szybist explains, was inspired by what at first had been the overwhelming experience of seeing numerous paintings that depicted religious scenes in Italy during her visit there, but later elicited a different response.

"I began to imagine imposing this subject limitation on a series of poems. I was drawn to the challenge of having to work that particular limitation, and I was drawn to the Annunciation scene for all kinds of reasons... Paintings of the Annunciation tend to reinforce a vision that a transformative encounter between two radically different kinds of being is possible, and yet they also emphasize a real and unmistakable distance between those beings that never closes. ... I wanted to include and enter that space in the poems."

Incarnadine won the 2013 National Book Award, and award judge Kay Ryan says that Syzbist's "lovely musical touch is light and exact enough to catch the weight and grind of love. This is a hard paradox to master as she does."

Szybist is also the recipient of a Rona Jaffe Foundation Writers' Award, two Pushcart Prizes, and fellowships from the Guggenheim Foundation, National Endowment for the Arts (2009), and the Witter Bynner Foundation (2009). She has been awarded residencies from the MacDowell Colony and the Rockefeller Foundation's Bellagio Center. Her work has been featured in The Iowa Review, Denver Quarterly, and The Best American Poetry (2008).

Her poem "Apology," from Granted, was selected for publication by the Public Poetry Project of the Pennsylvania Center for the Book in 2015.

Mary Szybist has taught at Kenyon College, the University of Iowa, the Tennessee Governor's School for Humanities, the University of Virginia's Young Writers' Workshop, West High School in Iowa City, and the Warren Wilson College MFA Program for Writers. At the time of this writing, she has lived in Portland, Oregon, since 2004, where she serves as an Associate Professor of English at Lewis & Clark College.

"I think that a good deal of poetry and art gives us some sense of access to another's voice, perceptions, texture of thought, imagination," she tells Deuben. "Sometimes it gives us better access to the strangeness in ourselves."