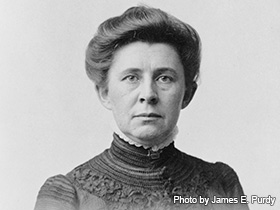 With humble beginnings on a Pennsylvania farm, Tarbell became America's most famous woman journalist. Her most famous work is The History of the Standard Oil Company (1904).

Ida Minerva Tarbell was born on November 5, 1857, in Hatch Hollow, Pennsylvania, and she was the daughter of Franklin Sumner Tarbell and Ester Ann McCullough. In 1883, she worked for the Chautauquan, where she later became managing editor. Leaving the Chautauquan, Tarbell went to Paris and did research for a biography about Madame Roland. After living in Paris for three years, she moved to Washington, DC, and was hired as a writer for McClure's Magazine, where she wrote series about Napoleon Bonaparte, Abraham Lincoln, and the Standard Oil Company. Tarbell died of pneumonia on January 6, 1944, in Bridgeport, Connecticut.

Ida Minerva Tarbell was born on November 5, 1857, in a log cabin in Hatch Hollow, Pennsylvania. She was the daughter of Franklin Sumner Tarbell and Esther Ann McCullough. The discovery of oil in 1859 near Titusville, Pennsylvania, launched the Tarbell family into the oil age. In 1870, upon moving to Titusville, Pennsylvania, Tarbell attended school and later went to Allegheny College where she was the only female in her freshman class. She majored in biology and graduated in 1880. She then taught at the Poland Union Seminary in Poland, Ohio, but grew depressed by the low pay and the overload of class work.

She moved back to Titusville, and she was offered a job by editor and Methodist minister, Theodore L. Flood. The offer was a position on the staff for the Chautauquan, a monthly magazine that was a responsible, liberal source of information for the adult-education programs of the Chautauquan Assembly Institute. She moved to Meadville where she learned to put a magazine together and write articles. Although Flood never granted her a title, she became the managing editor.

Tarbell was a woman who preferred a career over marriage. She was wooed by several men, but refused them; she later expressed the belief that no woman of her era could be a wife and pursue a career outside the house. In 1886, she wrote an article called "The Arts and Industries of Cincinnati" for the Chautauquan, which followed with controversial articles on women—"Women as Inventors" (1887), "Women in Journalism" (1887), and "The Queen of the Gironde" (1891). "I had been disturbed for some time by what seemed to me the calculated belittling of the past achievements of women by many active in the suffrage campaign," she stated later, according to Emily Arnold McCully's biography on Tarbell. The "queen of the Gironde" was Madame Roland, who was a moderate, republican Girondist in the French Revolution. Tarbell admired Madame Roland so much that when Tarbell left the Chautauquan for Paris to study historiography, she did research for a biography about Madame Roland.

Tarbell lived in Paris for three years and attended classes at the Sorbonne and the College de France. She supported herself by selling freelance articles about Parisian life to American newspapers. Tarbell wrote "France Ador??e," a short story about an American girl in Paris. It was published in Scribner's Magazine in 1892. Tarbell's work also caught the eye of Samuel S. McClure. He hired her as a writer for McClure's Magazine, and Tarbell moved back home to Titusville in 1893. While she was home waiting for her assignment from McClure, she completed her book on Madame Roland. After completing her book, Scribner's published her essay "Madame Roland" in 1893 and her book Madame Roland: A Biographical Study in 1895. In 1894, McClure gave her an assignment to write a biography. Tarbell moved to Washington, DC, to work with Gardner Green Hubbard, owner of the Napoleon portraits, and she did most of her research in the Library of Congress. Circulation of McClure's Magazine doubled to 80,000 people a month after the publication of the Napoleon series. An expanded book, A Short Life of Napoleon Bonaparte, was then published in 1895. Tarbell published two books about Madame Roland's revolutionary conduct and stressed Napoleon Bonaparte's modernization of France.

After four years of research, she completed The Life of Abraham Lincoln, which was serialized in McClure's and then published in book form in 1900. According to Robert L. Gale, "Tarbell depicted Lincoln's useful frontier-bred virtues and complexities and treated him less as a saint than as a democratic realist." Tarbell published seven more books about Abraham Lincoln.

Tarbell was given an assignment about Standard Oil Company and its founder, John D. Rockefeller. According to the New York Times in 1904, "Miss Tarbell was born in the Pennsylvania oil regions, and in her girlhood days was in the centre of the sphere of agitation that has existed from the time of the discovery of oil up to the present between the oil producer and the oil refiner. Her people were oil people." In 1902, she searched for concealed documents and elusive court records. She also interviewed oil executives like Henry Huttleston Rogers. Tarbell exposed the collusive and conspiratorial tactics against independent oil rivals, grabbing of pipelines, espionage, rebates, drawbacks, dummy companies, price cutting, handling of politicians, expensive lawsuits, threats of counter-suits, and mulcting of the weak. The History of the Standard Oil Company was published in 1904, marking Tarbell's greatest achievement. According to the New York Times in 1907, "Miss Tarbell's book contains a great deal of information about the Standard Oil Company, much of which was actually news at the time it appeared, and which still makes her volumes a valuable source of knowledge concerning the history and practices of the Standard Oil Company."

Tarbell was considered to be a "muckraker," which was a name that Theodore Roosevelt gave journalists of the early part of the twentieth century who exposed abuses in American business and government. Because of Tarbell's muckraking, the government applied the Sherman Antitrust Law to Standard Oil in New Jersey in 1906. The connection between The History of the Standard Oil Company and the Supreme Court's 1911 dissolution of Standard's holding company was noted by American historian, Charles D. Hazen: "Miss Tarbell is the only historian I have ever heard of whose findings were corroborated by the Supreme Court of the United States."

She was also a founder of the Authors' League, "a collective that looked after the interests of writers," according to McCully. And under President Woodrow Wilson, Tarbell served on the Women's Defense Committee to oversee women's contributions to the war effort.

From 1909 to 1913, Tarbell wrote three series of articles on women. The first was "The American Woman," which appeared in the American. It was about the rise of women's status as a result of the Revolutionary War and the Civil War. The second was also published in the American and then published in a book in 1912. It was called The Business of Being a Woman, and it applied factory efficiency methods and new technology to housework. The third was The Ways of Woman, and it was published in the Ladies' Home Journal and then as a book in 1915. The book was about women and how they should be content to limit their sphere of activity to family and community.

Following her mother's death on September 2, 1917, Tarbell herself became ill and was then hospitalized for three months when diagnosed with tuberculosis. Her doctor also noted symptoms of Parkinson's Disease, McCully's biography states, but did not inform her of this because at the time there was no cure for Parkinson's. He "simply advised her to get on with her life." Tarbell went on to participate in a Chautauqua speaking tour, during which she voiced her concerns that the Paris Peace Conference would result in another war, and to work on her novel The Rising of the Tide: The Story of Sabinsport (1919), which portrayed the perspectives of small town Midwesterners, but received poor reviews; she later made no reference to the book at all, even omitting from her autobiography.

Tarbell died on January 6, 1944, in Bridgeport, Connecticut, due to pneumonia. She is buried in Woodlawn Cemetery in Titusville, Pennsylvania. "In her time, Ida M. Tarbell was the only woman doing investigative reporting," McCully writes in her biography. " ... She considered herself a historian who exposed threats to traditional institutions that she believed were vital for democracy and the pursuit of happiness. ... Her career as a writer and then as a reluctant public figure was marked by unwavering honesty."

"She helped invent investigative journalism and was probably its most incorruptible practitioner, recording history and changing it in the process."