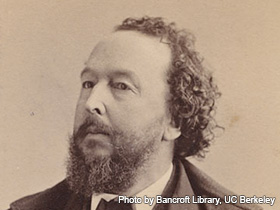 Kennett Square's Taylor was an extremely popular author of travel books, combining his love of German literature and poetry in an English translation of Goethe's Faust (1871).

Bayard Taylor was born in Kennett Square, Pennsylvania, the son of Joseph Taylor and Rebecca Way. Though Taylor was a prodigious reader and student, he felt constrained by the provincial farming life of Chester County. During the Civil War, Taylor served as Washington correspondent for the Tribune until, in May 1862, he was appointed secretary of legation under the U.S. minister to Russia at St. Petersburg; he resigned in 1863. Between 1858 and 1867, Taylor published 11 works and delivered more than 600 lectures. Having conceived of the idea of producing The English Faust in the 1850s, Taylor started his translation in 1863 and completed it eight years later. Taylor died in 1878.

Bayard Taylor was a prolific travel writer, lecturer, novelist, and a proficient poet. Taylor was born on January 11, 1825, in the Quaker community of Kennett Square, Pennsylvania. Fortunately, Taylor was raised both by his mother and father, Joseph and Rebecca Taylor. When Taylor was growing up, his father Joseph was offered a job as a county sheriff in West Chester. Accepting the job offer meant relocating Bayard and his other five children. As a result Taylor attended Bolmar Academy in West Chester, Pennsylvania.

Taylor's first poem was published in the local newspaper at an astonishing age of just 15. Just a year later when Taylor was 16, his poem "Soliloquy of a Young Poet" appeared in the Philadelphia Evening Post. His formal education ended in 1842 when he became an apprentice to a printer in West Chester. He made his first literary acquaintance with Rufus W. Griswold, to whom he dedicated his first volume of self-published verse, Ximena, orThe Battle of the Sierra Morena, and Other Poems (1844). Although Taylor's true passion was poetry, he learned that he could earn more money by writing prose.

At the age of 19, Taylor set sail for London to make his grand tour. The two-year tour not only served as Taylor's college education but also had an impact on his worldview and determined his new career. Taylor's tour seemed odd because he wrote to fund his trip across Europe, a practice he maintained throughout his career. His tour was also funded by commissions he received to write travel letters for The Saturday Evening Post, the United States Literary Gazette, and the New York Tribune. After Taylor returned to the United States, Taylor published an account of his travels, Views A-Foot; or, Europe Seen with Knapsack and Staff (1846), which underwent six editions in its first year of publication. In this book, Taylor wrote a letter to his good friend George Henry Boker, "I am not insensible that nine-tenths of my literary success (in a publishing view) springs from these very Views Afoot which I now blush to read. I am not known to the public as a poet, the only title I covet, but as one who succeeded in seeing Europe with little money." The struggle he felt between his enjoyment of his fame as a traveler and a writer as well as his desire to be a well-reputed poet was a lifelong dilemma for Taylor. Another significant part of Taylor's life came on October 24, 1850, when Taylor married a childhood friend, Mary Agnew. She died December 21, 1850, only two months after their marriage. The death of his wife left Taylor bereaved and anxious to travel again in order to cope with his grief. After this tragedy, he went on a two year trip to Arabia.

Taylor was a hard-working reader and writer, and he was able to accomplish large amounts of work quickly. Between 1858 and 1867, Taylor published 11 works and delivered more than 600 lectures. Taylor managed to continue publishing verse, his true passion. The Poet's Journal (1862) viewed Taylor's grief for his first wife as a celebration of familial life. In October of 1866 Taylor established himself in the ranks of his contemporaries by publishing a narrative poem of some 3,200 lines. Taylor had been working on this piece for 15 years. The Picture of St. John (1866) was praised by the ring of friends, poets, and critics who congratulated each other's work in order to assure the prosperity of their own. A fellow poet, William Cullen Bryant, stated that, "I congratulate you on having produced the best of your longer poems." This was a widespread comment amongst his colleagues. In 1869, Taylor published what he claimed was his last travel book, By-Ways of Europe, which is a collection of short pieces collected from a series of papers he wrote for the Atlantic Monthly.

As time went on Taylor's interests began to shy away from travel and the novel, and he started to invest time into a translation of Goethe's Faust, the greatest demonstration of his growing interest in German literature. As a result of Taylor's new love for "The English Faust" Taylor started his translation in 1863 and completed it eight years later. In order to be as faithful as he could be to Goethe, Taylor read all of the existing translations, commentaries, and histories about the masterpiece. He strove to translate the poem into its original meters while retaining the meaning. Taylor's commitment to maintaining the integrity of the meter was attacked by critics, who considered the translation outdated. However, Taylor referred to the project as a labor of love. After Taylor's eight year dedication to his dream project, he collected nominal economic rewards. The reputation Taylor earned as translator, however, far outweighed his weak reputation as a poet. Taylor's admirable knowledge of German literature was rewarded with an offer to be the nonresident professor of German literature at Cornell University in 1869.

The last volume published in Taylor's lifetime was Prince Deukalion: A Lyrical Drama (1878), Surprisingly, Taylor was praised even by his critics. Prince Deukalion represents Taylor at the height of his metrical and rhythmical capabilities. The volume was a drama made into four acts containing songs and characters who speak in blank verse. Prince Deukalion celebrated the noble theme of the breadths and depths to which man travels to achieve his goals. Taylor's tremendous interest in German literature, culture, and previous experiences in foreign affairs culminated in his appointment as minister to Germany in 1878. Taylor was very interested in accepting the position because he was preparing to write biographies of Goethe and Friedrich von Schiller. Sadly, Taylor became ill, and was not able to perform his new duties. He suffered repeated illnesses while in Germany, where he died December 19, 1878. His body was sent back to his home at Kennett Square for burial.