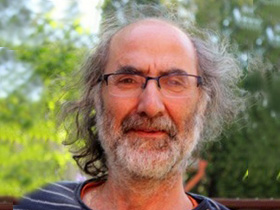 A professor at Clarion University, Philip Terman has written several books of poetry from his Grove City home.

Poet Philip Terman was born in 1957, in Cleveland, Ohio. He obtained his Bachelor of Arts and Master of Arts in Ohio. At the time of this writing, Terman has had five books published: What Survives. Poems. (1993), The House of Sages (1998), Book of the Unbroken Days (2004), Rabbis of the Air (2007), and The Torah Garden (2011).Terman is a professor at Clarion University of Pennsylvania and a co-director of the Chautauqua Writers' Festival in Jamestown, New York. He is also the Director of The Bridge Coffee House and Literary Arts Center in Franklin, PA, and a Contributing Poetry Editor for the Chautauqua journal. He lives near Grove City, Pennsylvania, with his wife and two daughters.

In 1993, Terman won a chapbook competition awarded by the Sow's Ear Poetry Review. His collection, What Survives. Poems., was then published by Sow's Ear Press.In 1998, Terman published his first full-length collection of poetry, The House of Sages.

Small Press Distribution reviewed The House of Sages and said "Terman's poems, like those of James Wright, have a down-to-earth mysticism, a hard-earned spirituality which cuts through the haze of everyday."

Book of the Unbroken Days was published in 2004. Jehanne Dubrow of the Prairie Schooner said this of Terman's third collection: "Although Book of the Unbroken Days speaks from a Jewish American perspective, the sentiments expressed are certainly universal." This book infuses, not only Terman's perspective as a Jewish-American, but also his perspective as a father and husband and who feels that a loving family is one of the most important things in life.

His collection Rabbis of the Air was published in 2007 and draws much of its creativity from Judaism. In this book, Terman suggests that nature is as important as a poet's rabbis. Jay Michaelson of The Jewish Daily Forward says this of Terman's poems, "I find more powerful in Terman's work is its individuality, as in the first poem from 'Rabbis of the Air,' titled 'As My Daughter Climbs the Apple Tree,' I Think of the Ancient Sephardic Poet Jehuda Halevi.'"

The Torah Garden (2011)is a collection of poetry that explores the meaning of being a Jew in America through personal and family history, prayer, religious exploration and political invective.

In addition to being collected in books, Terman's poems have appeared in several journals, including The Georgia Review, The Kenyon Review, The Sun Magazine, The Autumn House Anthology of Contemporary Poetry, and The New Promised Land: An Anthology of Jewish American Poetry. He has won the Anna Davidson Rosenberg Award for Poems on the Jewish Experience and the Kenneth Patchen Prize for Poetry.

His poem "A Response to Jehuda Halevi" was selected for publication by Public Poetry Project of the Pennsylvania Center for the Book in 2009.

At the time of this writing, Philip Terman teaches Creative Writing and Literature at Clarion University, where he also directs the Visiting Writers Program. He continues to director The Bridge Coffee House and Literary Arts Center in Franklin, PA, and is a Contributing Poetry Editor for the Chautauqua journal.

Terman lives in a red-brick schoolhouse near Grove City, Pennsylvania, with his wife, Christine and their two daughters, Miriam and Bella. He is known to occasionally perform his poetry with the jazz band Catro.