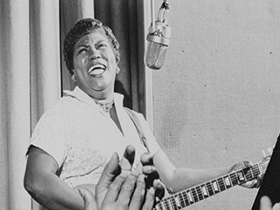 Pioneer of gospel rock, Sister Rosetta Tharpe, was born in Arkansas in 1951 and gained attention as a musical prodigy while traveling with her evangelist mother known as Katie Bell. Tharpe eventually moved to New York, where she crossed over into showbiz, introducing the mainstream to her gospel style. Her unique guitar-picking and soulful stage presence, which significantly influenced esteemed artists such as Elvis Presley and Johnny Cash, earned her the title: the Godmother of Rock & Roll. Tharpe enjoyed the success of international tours through her early 50s and died at age 58 in 1973. She is buried in Northwood Cemetery, Philadelphia, and January 11 is designated Sister Rosetta Tharpe Day in Pennsylvania to commemorate her significant contribution to the heart of rock and roll.

Born to Willis (Willie) B. Atkins, a farm laborer, and Katie Bell Nubin on a farm outside of Cotton Plant in Arkansas on March 20, 1915, Rosetta Tharpe began walking and talking before her first birthday and was musically gifted from an early age. Her father played the guitar and harmonica, and her mother, a beloved member of her church community and referred to as Mother Bell, played the piano and mandolin. Both of her parents taught Tharpe to sing, and she started playing the guitar by age three.

While little else is known of her father, Tharpe's mother left him in 1921 to be a traveling evangelist and took six-year-old Tharpe to Chicago with her, where they soon became members of the Church of God in Christ (COGIC). Tharpe's musical expression was celebrated and encouraged by her mother and the church congregation, all of whom regarded Tharpe as a musical prodigy.

Her teenage years traveling with her mother to various cities to perform in chapels, churches, and revival groups earned Tharpe nationwide celebrity in the church. In 1934, when Tharpe was just 19 years old, her mother arranged her marriage to preacher, Reverend Thomas Tharpe. She worked for the church under her husband's direction for the next four years, but it is believed he possessed a negative attitude toward women and used Tharpe's musical celebrity for monetary gain. She left him to begin a new life in New York and took her mother with her.

When Tharpe accepted a job at the prestigious Cotton Club in New York City, she found herself in a new realm of performance, far from the gospel singing of the church. She was suddenly in showbiz, and her church-going fans were not too happy about her transition. "It was like a bomb had dropped on gospel music when she flipped," said Tharpe's longtime friend Ira Tucker Jr. in a PBS episode of American Masters. "... It was hurtful to a lot of people, because they felt as though they had lost something. They had something, and it was great, but now it was gone. They viewed it almost like a death."

However, Tharpe continued to perform in church, as well as in showbiz. In October of 1938, she signed with Decca Records and recorded her first hit, "Rock Me," demonstrating her unique ability to pair spiritual lyricism with rocking guitar accompaniment. In her biography Shout, Sister, Shout!: The Untold Story of Rock-and-roll Trailblazer Sister Rosetta Tharpe (2007), Gayle Ward describes the complexity of Tharpe's music: "[It] incorporated elements of gospel, blues, jazz, popular ballads, country, rhythm and blues, and rock and roll. ...her [finger-picking guitar style] influenced Elvis Presley, Johnny Cash, Bonnie Raitt, and many others."

Tharpe is considered Gospel's first crossover artist and the original Soul Sister. She is credited for boldly breaking spiritual music into the mainstream. But it wasn't until after significant controversy surrounding her performance of "I Want a Tall Skinny Papa"—a song far removed from religious ideals—that Tharpe resolved to stick to gospel songs, giving them her unique, upbeat interpretations and, as a result, was able to reclaim the support of her church-going fans.

Despite breaking into a male-dominated industry, Tharpe established herself as one of the most popular musicians of her time by the age of 25. Wald continues in her biography: "Rosetta [in contrast to African American musicians raised in the church, inhabited] an in-between place where the worlds of religious and popular music intersected and overlapped. She performed church hymns on secular stages. ...She could sing about the evils of worldliness with irreverent pleasure. And like the best preachers, she was capable of presenting herself as both larger than life (furs, wigs, and jewelry) and as her audience's equal in human frailty and suffering... "

In the 40s, Tharpe toured often and was accompanied by popular groups, including The Dixie Hummingbirds and the Jordanaires. Her performance with the Jordanaires, an all-white vocal quartet, defied convention at the time, but Tharpe was known to be rebellious. "She referred to us as her four little white babies," said Gordon Stoker of the group. The irony of being a star but also subject to segregation was one she expressed in her biggest hit, "Strange Things Happening Everyday." She often slept on beds in her bus when touring, and white musicians would have to bring food to her, because she wasn't allowed inside hotels and restaurants.

"In her 35-year professional career," Wald states. "[Rosetta Tharpe] withstood failed marriages, personal disillusionment, volatile economic circumstances, racial discrimination, and rejection by her church. ... The woman who once owned two homes and a Cadillac and required a large shed to house all of her gowns is today buried in an unmarked grave in Philadelphia. ... [S]he pursued romantic relationships—primarily with men, but occasionally with women—wore pants before they were the norm for women, and swore like a sailor. She also maintained a lifelong affiliation with a church that regarded all of these behaviors as anathema."

At the age of 49, Tharpe was still enjoying successful tours. While performing in England in 1968, however, her mother Katie Bell died, and the loss took a toll on Tharpe. She became increasingly depressed and was also demoralized when diagnosed with diabetes, which she did little to treat. Eventually bedridden by complications from the disease, Tharpe ultimately suffered a stroke. The Godmother of Rock & Roll died at the age of 58 on October 9, 1973, at Temple University Hospital and is buried in Northwood Cemetery, Philadelphia. She was posthumously inducted into the Blues Hall of Fame in 2007, and in 2008, Pennsylvania Governor Rendell declared January 11 Sister Rosetta Tharpe Day to honor her legacy.