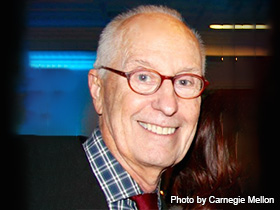 Thomas was involved in the entertainment world as an actor and director but mostly as a writer of plays, movie scripts, and TV scripts.

Washington County native Thom Thomas devoted himself to the theatre from his early days at the Pittsburgh Playhouse School of Theatre, through his tenure at Point Park College, to his life in New York City. Along the way, he had been given a number of grants.

Thomas Neil Thomas was born in Lawrence, Pennsylvania, on August 31, 1935. His parents were John Edward Thomas, a coal miner, and Ruby Jukes Thomas.

Thomas's first major work was The Interview (1976), a two-act play which concerns the tug-of-war between a journalist and his reclusive subject during an interview. The journalist, anticipating fame upon publication of his exclusive interview, eagerly attempts to delve into the famous writer's life, creating a mood of menace from which the only possible release is violence. It was first produced at Pittsburgh Playhouse in January 1976. It was later produced Off-Broadway at Direct Theatre in 1981. While Thomas had worked as an actor, stage manager, artistic director, and head of a college drama department, writing was still his greatest passion.

Thomas earned many awards for his talents. He won the 1964—65 Music Corporation of America fellowship. In 1969, he earned a grant from Ford Foundation. In 1975, he won a Shubert Fellowship. He earned another grant in 1978 from National Endowment for the Arts.

One of his more recent plays is A Moon To Dance By, a romantic, poignant drama set in New Mexico just two months before the start of World War II. Based on actual events, the play explores the relationship between Frieda Weekley and her grown son Monty. Frieda's passionate affair with D.H. Lawrence led her to leave her husband and children in England. Years later, after Lawrence's death, Frieda lives near Taos, New Mexico, with her Italian lover, Angelo. When Monty comes to visit, mother and son see each other for the first time in 30 years and grapple with their needs for atonement and self-discovery. It was nominated for a Pulitzer Prize for Drama in 2009.

Thomas died after a short fight with leukemia in 2015. He was 80 years old.