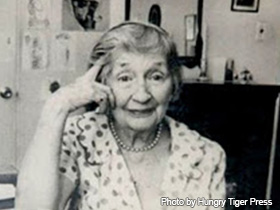 Ruth Plumly Thompson was born in Philadelphia and succeeded L. Frank Baum by writing 19 books for the Oz series.

Ruth Plumly Thompson was born on July 27, 1891, in Philadelphia, Pennsylvania. Thompson was briefly the editor of the Sunday Children's page from 1914 to 1921. Her most notable work is the succession of L. Frank Baum in the Oz series. Thompson wrote nineteen Oz books for Reilly and Lee as well as numerous poems and short stories before her death in 1976.

Born Ruth Plumly Thompson in Philadelphia, Pennsylvania on July 27, 1891, to George Plumly and Amanda Elton Thompson, Thompson quickly grew as an author and story teller. Her family moved to New York City when George Plumly Thompson became the night editor of the New York Times. Due to heightening stress, he died of a heart attack at age thirty-one. Thompson and her mother returned to Philadelphia shortly thereafter.

Ruth Plumly Thompson began her literary career during high school. Her first fairy tale was published in the popular children's magazine, St. Nicholas. After high school, she was offered a full scholarship opportunity to attend Swarthmore College, but turned it down in order to remain close with her family, in a time of financial need, as a free-lance writer. Thompson took it upon her shoulders to support her mother who had become overwhelmed with stress over her career, invalid sister, and the death of her brother during World War I. At this time, many of her stories were beginning to be published in newspapers and periodicals. During her twenties, Thompson took her first job at the Philadelphia Public Ledger. Her popularity quickly grew and she was granted a full staff position.

Two years later, when the editor of the Sunday Children's Page left, Thompson was offered the position. She was initially asked to do what her predecessor had done—adapt outside sources for the page—but instead Thompson wrote mostly her own original material. She immediately gained a rapport with the local children. Thompson continued to edit the Sunday Children's page from 1914 to 1921, in which during her time as editor, she created the Santa Claus Club as an organization to gather food and gifts for underprivileged children during the holiday season. Marjorie "Marge" Henderson Buell was one such child that benefited from this program. Buell went on to serialize the Little Lulu cartoons for the Saturday Evening Post, and then later to illustrate some of Thompson's stories.

Much of Thompson's writing at this time was The Perhappsy Chaps (1918), The Princess of Cozytown (1922), and The Wonder Book (1929); and later these were all collected in The Wizard of Way-Up. These writings are noted for their cheerful, humorous attitude toward life and language. Daniel P. Mannix wrote in the Baum Bugle that Thompson "considered any page that did not have at least three jokes in it—usually puns—a page wasted."

After L. Frank Baum's death in 1919, Reilly & Lee, the Chicago publishing house that produced Baum's bestselling series, Oz, was frantically looking for a replacement author. William F. Lee, Vice President of Reilly & Lee, took a special interest in Thompson's work. In an article for The Baum Bugle, Thompson recalls: "Mr. Lee, whose home was in the Philadelphia area, read many of the Thompson tales with great glee and amusement and with one of those lightning flashes of insight and conviction that here was L. Frank Baum's successor and future Historian of Oz." Ruth Plumly Thompson's popularity among the children granted her this extraordinary opportunity. "Writing the adventures of Oz," she says, "was one of the happiest experiences of my life." Disappointingly, Thompson's attempt at recreating the Land of Oz was not an immediate success. Her first book, The Royal Book of Oz (1921), was coincidently published under the name of L. Frank Baum, claiming that the late author had created the ideas which Thompson completed. This was a technique that the publishers inscribed to ease the transition from Baum to Thompson, although she had written the book originally in its entirety.

John R. Neill, who had illustrated fourteen of Baum's Oz books, was immediately taken by Thompson's imaginative powers. On completing his illustrations from Kabumpo in Oz (1922), he wrote, "Incidentally, I would like to tell you how much I enjoyed reading the [manuscript] and making the pictures. After illustrating about seventeen Oz books, I think it worthwhile to let you know this with my congratulations on having secured an author of such superior qualifications to continue the work of supplying the 'Oz books.' Every feature of the child appeal is handled with the greatest skill. The whimsical, the humor, the interest and the zip of the book make me think it one of the very best Oz books so far." Thompson continued to write a new Oz book each year from 1920-1939.

Towards the last few books she wrote, many of her manuscripts were rejected by Reilly & Lee. Thompson's connection with the Baum estate and her producer quickly faltered. When the MGM production of the Technicolor film, The Wizard of Oz, was released in 1939, Thompson knew it was time to revive the Oz series. In negotiations with Roy Disney, Thompson worked to have some of the other Oz stories cartooned by Walt Disney Pictures. Mrs. Baum declined Disney's offer and sold the rights of the Oz series to a private producer who coincidently did not have enough money to complete his "shorts." After nineteen Oz books, Thompson says, "I was reluctantly forced to resign my post of Royal Historian of Oz. But Oz is ever close to my heart...Someday I might even write another book about the strange happenings in that merry old kingdom of Oz."

In her last book, Ozoplaning with the Wizard of Oz (1939), Thompson brought back many of the characters of The Wonderful Wizard of Oz. Thompson generally followed the same structural plot of Baum's Oz novels as a central quest, but she introduced new ideas of morals and romance. In her books, characters would be searching to find a purpose, such as a princess ready for marriage. Working under the assumption that she was completing the last Oz book, it seemed only fitting that the final book should return to the first Baum story. Thompson included seven characters from Baum's inaugural story in Ozoplaning with the Wizard of Oz, including the famous foursome, Dorothy Gale, the Scarecrow, the Tin Woodman, and the Cowardly Lion.

For the next ten years, around the '40s and the '50s, Thompson contributed many short stories to the children's magazine Jack and Jill. Working steadily as a free-lance writer again, she created and wrote the "Peter Puppet Page" for the magazine. Shortly after a staff change, the magazine's policies changed and Thompson had trouble selling her work. She returned once again to Oz. Reilly & Lee rejected her twentieth book claiming they had another more promising manuscript already in development. Thompson did not publish again until 1972 when the International Wizard of Oz Club picked up Yankee in Oz (1972). Struggling from failing health, Thompson re-worked one last manuscript entitled, The Enchanted Isle of Oz (1976), published by the Oz Club just before she died in 1976.