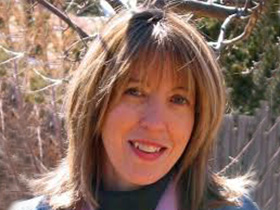 Lisa Tucker has written novels for young adults, including The Song Reader (2003) and Shout Down the Moon (2004).

Born in a small town in Missouri, Lisa Tucker attended both the University of Pennsylvania and Bryn Mawr College, earning degrees in English and mathematics. Before she became a writer, she worked as a waitress, office cleaner, jazz musician, and computer programmer. After the birth of her son, she wrote her first novel, The Song Reader (2003), a teenage love story. She is the author of six novels, which have been published in twelve different countries. At the time of this writing, Tucker lives in Philadelphia.

Lisa Tucker was grew up in a small town in Missouri, but moved to Pennsylvania when she began her extensive college career. Tucker has an impressive education with a variety of degrees from several different schools. She first attended the University of Pennsylvania, where she earned a BAand an MAin English. Also, she did all the coursework for a PhD, but she did not write her dissertation in American Literature. She also attended Villanova University, where she got her MAin mathematics and did some additional graduate work in mathematics at Bryn Mawr College.

She has used her extensive knowledge in both mathematics and English in her teaching career. She taught a creative writing class at the University of Pennsylvania as well as mathematics classes at Bryn Mawr College. Tucker held a number of odd jobs including waitressing, computer programming, and office cleaning before she started writing. She has also spent time touring with a jazz band. She has taught creative writing at the Taos Writers' Conference, an organization that offers numerous writing workshops and organizes a summer gathering in New Mexico attended by authors from all over the country. She also was a creative writing professor at the University of California at Los Angeles.

It was not until after this string of various careers and the birth of her son, Miles, that Tucker began to write novels. The Song Reader, her first novel about love and grief, was published in 2003. It is recommended for a broad range of ages, but VOYA's Fransisca Goldsmith would suggest it to "girls who are interested in what makes people unique." The story is narrated by Leann, an 11-year-old girl whose mother recently died. Her father abandoned her when she was young, so she is raised by her older sister Mary Beth, who has her own business giving people psychological counseling based on the songs they report getting stuck in their heads. Mary Beth develops psychological problems of her own when one of her clients attempts suicide because of her counseling. Tucker's debut novel keeps the reader emotionally involved with its characters through themes of compassion, grief, love, and forgiveness. According to a KLIATT review by Shelley A. Glantz, the novel "portrays characters with great depth who will tug at readers' heartstrings."

Her second novel, Shout Down the Moon (2004), also involves these emotional themes along with struggling characters. Once again, Tucker incorporates her interest in music into the story by making the protagonist, Patty Taylor, a jazz musician trying to support her son. Patty's life is a constant struggle involving homelessness, terrible jobs, and complicated relationships. The depth of Patty's strong character pulls the reader in through a first-person narration. This book has been labeled a "pageturner," by journals such as the School Library Journal, which called Shout Down the Moon "A suspenseful story that will have readers holding their breath."

Readers have also said this about Tucker's captivating third novel, Once Upon a Day (2006). According to USA Today, this "beautifully written" and "intriguing" novel is especially fascinating because Tucker intertwined two stories of love, mystery, and suspense. In one story, the young and innocent Dorothea searches for her missing brother and ends up falling in love with a cab driver on the way. The other tells the story of Lucy and her husband, whose home has been attacked. This novel shares the emotional themes of Tucker's other novels in a surprising and unusual way. As Norah Piehl of BookReporter puts it, "Once Upon a Day [raises] profound questions about the limits of love, the power of the past, and the capacity of the human heart to deal with tragedy.

The characters of Tucker's novels are probably so well-developed because Tucker feels very connected to them throughout the writing process. In an interview with Pages Magazine, she complained of crying because she did not want to put her characters through such horrible situations. "I was sobbing. I thought, 'I can't write this; I can't do this to them.'" While she makes it clear that her stories are nothing close to memoirs or autobiographies, she can relate to many of her characters. For example, Tucker's parents were divorced when she was young, and she did not live with her mother, so she can imagine the feelings Leann has in The Song Reader. Tucker's love for her son shows through the motherly characters of Mary Beth and Patty. Also, the characters in her first two novels share Tucker's love for music. Her connections with her characters definitely help to produce truly touching stories. "There's a kind of compassion certain stories teach us, she said in the Pages interview, "They show us the interior of people who have done things that are unforgivable."

Tucker'sfourth novel, The Cure for Modern Life (2009),is an intense novel exploring how the main characters grapple to defend what is important to them and incorporates themes about doing the right thing in a new age. Two of the main characters, Matthew and Amelia, were once lovers, but a decade later are enemies in the professional realm, as Matthew's values as a "high-powered pharmaceutical executive" clash with Amelia's profession as as medical ethicist. Their only link is Matthew's friend, Ben, who is now dating Amelia. They all come together after Matthew finds two homeless children that need taken care of. Booklist's Joanne Wilkinson asserts this novel proves that Tucker is "a natural born storyteller."

In 2010, Tucker published her fifth novel, The Promised World, a novel that explores a tragic family situation. After losing the right to visit his children, Billy Cole commits suicide, and the rest of the novel delves into his family's reactions to the death, particularly his twin sister and her husband, who finds out the twins' parents are actually alive. Publisher's Weekly reviewer Annie McCormick writes that the book is "a masterfully told story that delves deep into the human psyche. The Promised World was deemed a NAIBA Notable Book and was on the Indie Next List.

Tucker's sixth novel,The Winter's in Bloom (2011),is considered her most optimistic novel. She wrote the book in the midst of dealing with her brain aneurysm, continually procrastinating the surgery because she wanted to finish her book first. In a beautiful essay in the New York Times, Tucker writes : "I was fascinated by the way the book was changing as I went through all this. Though the novel I was writing had nothing to do with my aneurysm, the story kept surprising me as it became more optimistic, more engaged with the beauty of life. I changed the title from "The House of Doubt" to "The Winters in Bloom." The Winter's in Bloom tells the story of Krya and David Winter, who are happily married and love their son, Michael. Because Krya and David both have complex pasts filled with secrets, they silently fear their bliss will soon be ruined, which happens one summer day when Michael disappears from their backyard. Their search to find Michael forces them to share their hidden secrets, but also teaches them that it is never to late to achieve domestic bliss; with hope, their "future can bloom." The Winter's in Bloom is a More Editor's Pick for Hottest Fall Novels and an Indie Next List Great Read Selection.

At the time of this writing, Tucker lives in Philadelphia with her family.