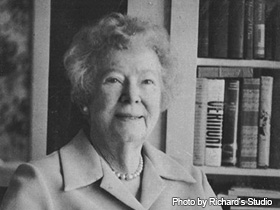 New Alexandria native, Turnbull wrotebooks, such as The King's Orchard (1979),which were often described as nostalgic and quaint by critics, but were still read by many.

Novelist Agnes Sligh Turnbull was born in 1888 in New Alexandria, PA. After a dozen years as a short story writer, Turnbull wrote her first novel, The Rolling Years, published in 1936. In the 14 additional novels she wrote over the next 40-plus years, Turnbull built a thorough chronicle of the Scots who settled and farmed rural Westmoreland County. Turnbull died in 1982.

Novelist Agnes Sligh Turnbull was born on October 14, 1888 in New Alexandria, Pennsylvania. Her parents were Alexander Halliday Sligh, an immigrant from Scotland, and Lucinda Hannah McConnell, a native of the Scottish communities of western Pennsylvania. This background would contribute greatly to the vocabulary Turnbull used in her novels about Scots pioneers in western Pennsylvania. Turnbull attended the village school, learning to read from Appleton's readers, which she would equate to the older McGuffey readers for their influence. She then went to boarding school since New Alexandria did not have a high school. Later she attended Indiana State Teachers College (now Indiana University of Pennsylvania) and graduated Phi Beta Kappa. She would also take classes at the University of Chicago for one year before beginning a teaching career in high school English until 1918. In that year, she married James Lyall Turnbull who left for France one month after their wedding. He would survive the war and they would be married for forty years. The couple had one daughter, Martha. At war's end Agnes Turnbull began writing, selling her first short story to The American Magazine in 1920. For the next twelve years she would work in that form, publishing regularly.

Though she had achieved some success as a short story writer, Turnbull's greatest claim to literary attention would come with her decision to write novels. Unlike many authors, Turnbull was able to work with major publishing houses from the beginning of her novelistic career: Macmillan from 1936 to 1947 and Houghton Mifflin from 1950 to 1980. Though Turnbull's novels are now little known, she sold millions of copies of her works and got good reviews. The turning point seems to have been the early 1970s when the old-fashioned morality of her work brought comments like "her new [novel] seems fatuous, the writing almost campy." Austin Olney, editor-in-chief of her publisher Houghton Mifflin, would disagree: "Agnes had a sweetness and goodness about her that was never cloying and seldom prevented her from getting what she wanted. All of us who worked with her loved her as a friend as well as a highly productive author. Somehow she was able to make the so-called old-fashioned virtues seem not only admirable but still appropriate."

Agnes Turnbull herself would describe her philosophy concerning what to write: "I feel that there are more good people in the world than bad and that it is just as realistic to write of the former as the latter, and much more satisfying."

Although she had left Pennsylvania in 1922 and lived in Maplewood, NJ for sixty years, her heart and her sympathies always lay with the people of Westmoreland County, to whose people she would dedicate her 1942 novel, The Day Must Dawn. Her first novel, published six years earlier was The Rolling Years (1936), a massive tale of three generations of Scots in Westmoreland County and their struggles to maintain their strict Presbyterian faith in a secular world. Many of Turnbull's other "Pennsylvania" novels deal with similar themes: Remember the End (1938), The Gown of Glory (1952) and The Nightingale (1960) among them. Turnbull also wrote four juvenile novels: Elijah the Fish-bite (1940), Jed, the Shepherd's Dog (1957), George (1964), and The White Lark (1968). Her early diaries were excerpted in 1941's Dear Me: Leaves from the Diary of Agnes Sligh Turnbull.

Two years after the publication of her last novel, The Two Bishops (1980), Agnes Sligh Turnbull died, January 31, 1982 in Livingston, NJ.