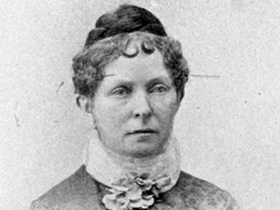 Metta Fuller, the first dime novelist in the U.S., was born in Erie in 1831. Her most successful novel, Maum Guinea, and Her Plantation "Children (1862), was praised by abolitionists and Lincoln.

Metta Victoria Fuller Victor, born in 1831, is credited for authoring one of the country's first detective novels. Under a pseudonym, Seeley Regester, she wrote more than 100 dime novels, a type of book that became a sensation in the United States.

Victor was born Metta Victoria Fuller in Erie, Pennsylvania, on March 2, 1831. She was the third of five daughters born to Adonijah and Lucy Fuller. Victor began writing at the early age of ten. In 1839, the Fuller family moved to Wooster, Ohio, where Victor and her sister, Frances, attended a female seminary. Victor began contributing her stories to local newspapers at the age of thirteen and eventually had articles published in the Home Journal in New York. She moved with her sister to New York City in 1848, where they became members of the literary society and began their careers as writers. The sisters produced Poems of Sentiment and Imagination, with Dramatic and Descriptive Pieces in 1851. Victor also enjoyed personal success with American and English audiences with her book The Senator's Son, or, The Maine Law: A Last Refuge, which was published in 1851.

Over the next few years, Victor published more novels that also found some success. In 1856, Victor married Orville J. Victor and worked alongside him as an editor of Cosmopolitan Art Journal for the next four years. The couple bore nine children together. Victor continued her career and served as editor at Home magazine until 1860 when she took over editorship of the Cosmopolitan Art Journal because her husband left the position to develop a new kind of novel.

The new "dime novel" series of books Orville Victor wanted to create were sensational and cheap, but regardless, the American public adored them. Victor wrote three "dime novels" in 1860: Alice Wilde, The Raftsman's Daughter, and The Backwoods Bride. Her most popular literary contribution to the "dime novel" era was Maum Guinea, and Her Plantation "Children," published in 1862. This novel gained much public success due to the kind words of praise from abolitionists like President Abraham Lincoln. She wrote wildly popular novels, creating more than a hundred works published under the pseudonym Seeley Regester. Victor created her most well known work, The Dead Letter, in 1866. Many historians of popular literature credit Victor as being one of the first authors of detective fiction in the United States. Metta Fuller Victor penned many other novels over the years and commanded high prices for works she contributed to periodicals. It was recorded that she commanded a price of $25,000 for a group of her stories in 1870.

Metta Victor died from cancer on June 26, 1885, in Hohokus, New Jersey. She is buried in Valleau Cemetery in Hohokus.