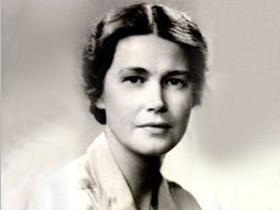 Germantown native, Viningwas the tutor to the crown prince of Japan, out of which came Windows for the Crown Prince (1952), which details her experiences in Japan.

Elizabeth Gray Vining of Germantown had a long and productive life of letters. Her first successful story came at age 13 and her first published book at 27. She would eventually win the Newbery Award for Adam of the Road (1942). Following World War II, she began a connection with Japan that would last the rest of her life and stimulate the writing of several books. Vining died in 1999 at age 97.

Elizabeth (Gray) Vining was born in the Germantown section of Philadelphia, Pennsylvania, on October 6, 1902. Her parents were John Gordon Gray, a businessman, and Anne Moore (Iszard) Gray. Vining's first success as a writer came at the age of 13 when she published a story in The Young Churchman (1915), for which she received $2 and encouragement from the editor to send more. In 1929, she married Morgan Fisher Vining, associate director of the Extension Division of University of North Carolina. Less than four years after they had been married, Vining's husband died in a New York automobile accident, in which she was also seriously injured.

After graduating from Germantown Friends School in 1919, Vining attended Bryn Mawr College, graduating in 1923. Vining began working as a teacher and earned a degree from the Library School of Drexel Institute. In 1926 she joined the library staff at University of North Carolina in Chapel Hill. Vining published her first book, Meredith's Ann, in 1929. An Episcopalian all her young life, Vining became deeply interested in Quakerism after her husband's death and joined Germantown Meeting in 1934. By 1946, Vining had written 11 books, including Newbery Award winner Adam of the Road (1942). She had worked as a teacher and librarian, and was working for American Friends Service Committee when she was recommended by a U.S. social welfare organization to tutor the crown prince of Japan.

Vining is best known for her influence on the Japanese Monarchy via her position as tutor of Japan's crown prince, Akihito. Brought to Japan to teach 12-year-old Akihito English and give him an understanding of the outside world, Vining gave the boy a sense of individualism that he would likely not have received from his native Japanese culture. Vining addressed the boy as "Jimmy," refusing to call him a prince, and taught him to play western games like hide and seek. Her influence can be seen in many of Akihito's lifestyle decisions in his later years as Emperor. Breaking with Imperial tradition, he married a commoner, and he and his wife raised their children by themselves. Gray was the only foreign guest at the Emperor's wedding ceremony in 1959, and he continued to keep in touch with her after her departure from Japan. Vining's four years in Japan generated several books. Her 1952 book, Windows for the Crown Prince, told of her experiences as tutor to the future Emperor of Japan. Vining's appreciation for Japanese culture compelled her to write Return to Japan (1960). Vining wrote roughly 30 books including novels, story collections, and children's fiction.

The Japanese government awarded Vining the Third Order of the Sacred Crown for her work. Vining was also honored with an American Women's Eminent Achievement Award, and was named Distinguished Daughter of Pennsylvania. Her book Adam of the Road received a Newbery Medal, and she received the Herald Tribune Spring Festival Award for her book, Sandy. In 1954, the Women's National Book Association bestowed her with a Constance Lindsay Skinner Award. Additionally, Vining won the Philadelphia Literary Award for Take Heed of Loving Me, and a special award in 1980 for Being Seventy. Vining was made a Doctor of Letters by Tufts College, Douglas College, Women's Medical College, Lafayette College, and University of North Carolina at Greensboro. She was also made a Doctor of Humane Letters by Russell Sage College, Haverford College, Western College for Women, Cedar Crest College, Moravian College, Wilmington College, and International Christian University. Vining received an honorary degree in Education from Rhode Island College of Education.

On November 27, 1999, Vining died at Kendal at Longwood, a Quaker retirement community, in Kennett Square, Pennsylvania. She was 97.