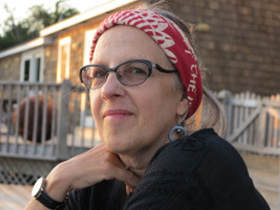 Director of the Creative Writing Program at the University of Pittsburgh at Greensburg, Judith Vollmer has written six volumes of poetry and is co-editor of 5 AM.

Award-winning poet and professor Judith Vollmer was born and raised in Pittsburgh. She earned both her BA and MFA from the University of Pittsburgh, and all six of her published works were influenced by the rich character of her hometown. Her books have received notable recognition, including the Brittingham Prize, Cleveland State Poetry Prize, and the Center for Book Arts Prize. She is the recipient of the 1992 Chancellor's Distinguished Teaching Award of the University of Pittsburgh. At the time of this writing, she teaches in the undergraduate Writing Program at the University of Pittsburgh at Greensburg and in the Low Residency MFA Program in Poetry & Poetry in Translation at Drew University. Vollmer also co-edits the poetry journal 5 AM. She lives in the Nine Mile Run Watershed area of Pittsburgh.

Born in 1951, Judith Vollmer was a child with a passion for books. When she was 11 years old, her mother, then in her thirties, decided to attend college to pursue a literature degree, which was uncommon at the time for a woman who was also raising three children: Vollmer and her two brothers. Vollmer recalls her mother reciting poetry while she cooked dinner and refers to this as an early inspiration to her own literary interests. One of her high school teachers later introduced Vollmer to poems by Li Po, and this also piqued her interests. It wasn't until her undergraduate years at the University of Pittsburgh, however, that Vollmer formally read and studied poetry while earning her Bachelor's degree in English literature. After earning her degree in 1973, she continued to work as a journalist, which had been her primary focus.

While maintaining her position as a reporter with the Pittsburgh Press, Vollmer wrote poems in between assignments and attended local readings. A reading by Octavio Paz one evening resonated with Vollmer so deeply that she decided right then and there to pursue graduate studies to work on her poems. She began earning her MFA in Poetry in the University of Pittsburgh's inaugural MFA program, which allowed her to attend classes at night and keep her newspaper job. She studied with such accomplished professors as Ed Ochester, Gerald Stern, Louis Simpson, Harry Mooney, and others, eventually earning her MFA in 1981.

Her third volume, The Door Open to the Fire(1998), won the Cleveland State Poetry Prize, and was nominated and named an honors finalist for the Paterson Poetry Prize two years later. Vollmer tells The Fourth Review contributor, Marcella Prokop, "[The Door Open to the Fire] is my first long love poem to Pittsburgh. It's filled with affection and admiration and joy, but also with anger and it's a dismissal of the local. It's been part of the culture here for a long time that if it's here, it can't be good. If it's made here, it must be absent from the real culture, the real land of artistic experiment. So, that's what I grew up with and I had to fight that."

Much of Vollmer's poetry portrays cityscapes and urban life inspired by her hometown of Pittsburgh. Its present, merged with its raw steel-town past, inspires her exploration of the changing and unsettled identity of the city. Reactor (2004)uses a fragmented narrative style to compare and blend worlds of the past with the threat of technology. Other explored topics include literature, family, and the chilling danger of "a sliver of plutonium."

On The Water Books (2012), James Martin Spears says in a review, "While some poems in her fifth published poetry collection, The Water Books, occur in places as diverse as Delaware and Rome, the poetry does not stray far from what has molded her life—her family, both in America and in Poland, and the city in which she grew up." The collection also delves into subjects related to women (their bodies and their love), time, and travel as a means of sharpening self-awareness.

Several of Vollmer's poems and reviews have appeared in publications, such as Poetry International, Agni, The Women's Review of Books, Poet Lore, Cerise Press, The Fourth River, The Great River Review, and many other journals and anthologies. Her essay on Baudelaire, "The Stroll and Preparation for Departure," was included in the Cambridge Companion to Baudelaire (Cambridge University Press, 2006). In 2000, she received a Pennsylvania Council on The Arts Fellowship, and she is the recipient of a Literature Fellowship from the National Endowment for the Arts. Vollmer has also attended residencies at Yaddo, the American Academy in Rome, the Centrum Foundation, the Blue Mountain Center, and the Vermont Studio Colony.

Her poem, "The Coffee Line," from Reactor, was selected by the Public Poetry Project of the Pennsylvania Center for the Book in 2005.

Vollmer reads her work nationally at colleges, universities, museums, galleries, arts organizations, and community centers. At the time of this writing,she teaches in the undergraduate Writing Program at the University of Pittsburgh at Greensburg and in the Low Residency MFA Program in Poetry & Poetry in Translation at Drew University. She is a recipient of the 1992 Chancellor's Distinguished Teaching Award of the University of Pittsburgh and co-edits the poetry journal 5 AM. She lives in the Nine Mile Run Watershed area of Pittsburgh.