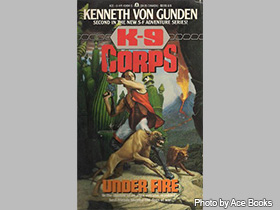 Science fiction author, Kenneth Ray Von Gunden, was born in 1946 at the Centre Community Hospital in Bellefonte, Pennsylvania. He has written seven science fiction books, four nonfiction books related to science fiction cinema, and a variety of articles and short fiction pieces. At the time of this writing, he resides in State College with his wife Donna and is a professor of American Studies, Cinema Art and Integrative Arts at Penn State's Altoona campus.

Science fiction writer Kenneth Ray Von Gunden was born in 1946 at the Centre Community Hospital in Bellefonte, PA. On the webpage for the Science Fiction Writers of America, Von Gunden admits that he became enchanted with science fiction at the age of 12."I began with those big Groff Conklin anthologies and graduated to Robert A. Heinlein juveniles." He then continued to go to his local library every Saturday to read science fiction.

Von Gunden attended Pennsylvania State University for his Bachelor of Arts, Master of Arts, and PhD. As a graduate student, Von Gunden assisted Phil Klass with teaching one of the first science fiction literature courses in the United States. Later while a PhDstudent, Von Gunden taught popular culture and film courses at Pennsylvania State University and at the Rockview State Correctional Facility in Centre County. Von Gunden obtained his PhDin American Cultures from Penn State in 1989.

Von Gunden's first fiction book was StarSpawn, published in 1990. StarSpawn is a science fiction novel detailing the invasion of Medieval era Earth. An Rz'uwlian ship visits Earth for research. While the aliens are on Earth, an intelligent and malevolent alien species of parasite escapes. The first victim of the parasite is Sir Morrough of Ely. The parasite names itself Jinui and then with Morrough begins to multiply and take over other human victims. However the plan is not successful because the Rz'uwalians capture Morrough and invent a way to kill and remove the parasite. During their research, the Rz'uwalians do discover that hundreds of years before a different alien entity invaded the planet.

The next four books Von Gunden published are from the K-9 series. The first and second books from the series, K-9 Corps and K-9 Corps: Under Fire, were published in 1991. The third and final books from the series, K-9 Corps: Cry Wolf and K-9 Corps: Last Resort were published in 1992. All of the books from this series involve the secret agent-Ray Larkin, and his team of genetically-altered scout dogs who have the ability to speak. The dog team consists of Beowulf, Grendel, Mama-san, Anson, Ozma, Little John, Frodo, Sinbad and Pandora. The dogs prove to be heroes throughout the series united by their law which is "To stand by Man's side-as dogs will always stand. Together Man and dog."

Kenneth Von Gunden wrote four nonfiction books examining films from the science fiction and/or fantasy genre(s). One of these, Flights of Fancy: The Great Fantasy Films, was published in 1989. Flights of Fantasy is a scholarly study of fifteen of the greatest fantasy films and each film's relationship to written fantasy, other films and cultural myths. The films range from The Dark Crystal to The Wizard of Oz. Don D'Ammassa of the Science Fiction Chronicle said that while reading the book "...it was nice to be reintroduced to some old friends."

Von Gunden also wrote an expanded treatment of his doctoral dissertation, Five Postmodern Auteur: Coppola, Lucas, De Palma, Spielberg and Scorsese. The periodical Choice stated that in Five Postmodern, Von Gunden's "...readings of individual films move beyond superficial categories to examine thematic and stylistic concerns..." In this work of nonfiction, Von Gunden argues that the five directors grew up as "consumers of popular culture, watched films on TV, went to film school and made films that reflected all of this." In staying with the cinematic theme, another nonfiction book is titled Alec Guinness: The Films and was published in 2001. This book is set in three parts: biography, analysis of his 43 films and an entire filmography. The film-watchers may remember Alec Guinness in his Oscar-winning role of Colonel Nicholson, a British officer in a Japanese prisoner-of-war camp in The Bridge on the River Kwai or as Obi-Wan Kenobi, the Jedi master in Star Wars.

Von Gunden has also authored two articles based on the fantasy-film genre. One, published in the University of Mississippi Studies in English examines Edgar Allen Poe's "The Black Cat" on film. And the other called "The RH Factor" is a detailed examination of the film: The Rocky Horror Picture Show and the cult-like following of movie-goers who participate as characters of the film as it plays simultaneously in the theater.