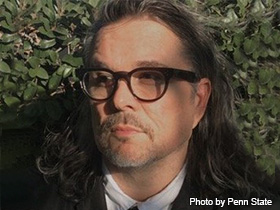 Altoona native, Walker has been working in Hollywood as a screenwriter and a script doctor. His most famous work to date, Se7en (1995), was nominated for an Academy Award.

Andrew Kevin Walker specializes in violent and dark noir-type screenwriting, quickly establishing himself as an A-list screenwriter. Born in Altoona, Walker graduated from Penn State University in 1986. With his move to New York, Walker found critical acclaim with Se7en (1995). At the time of this writing, Walker resides in Los Angeles.

Andrew Kevin Walker was born on August 14, 1964, in Altoona, Pennsylvania. Walker was raised in Mechanicsburg, where he attended the Mechanicsburg Senior High School. He graduated from his high school in 1982, opting to attend Penn State University. Four years later in 1986, Walker graduated with a bachelor's degree in Film Production.

After graduating, Walker moved to New York City and started his career with a job at Tower Records. While working at Tower Records, Walker worked on several low-budget independent films, but, frustrated by his lack of success, slipped into a deep depression. However, he channeled his black mood into the creation of his first screenplay, Se7en (1995). This film is a dark screenplay in which a serial killer murders people based on the seven deadly sins. Success followed, with New Line Cinema buying the rights to the crime thriller, inducing Walker to relocate to Los Angeles soon afterward.

Unfortunately for Walker, it took several years for Se7en to go into production, during which time he contributed to HBO's Tales From the Crypt,and wrote the thrillers Brainscan (1994) and Hideaway (1995). During this time however, Walker was asked by New Line Cinema to tone down the gruesome ending from Se7en (in which the severed head of the lead female character was shown inside a box) to make it more agreeable. However, Walker found allies in director David Fincher and the film's stars, Brad Pitt and Morgan Freeman. These figures supported Walker's shocking finale, eventually convincing executive producer Arnold Kopelson to keep the surprise ending. Se7en became one of 1995's biggest successes, both critically and commercially, and established Walker as a screenwriter. According to Almar Haflidason, writing for the BBC, throughout Se7en "in the place of the obvious is subtlety.... Rather than lingering gore shots, we get a diffused layering of the visual and verbal, to nauseating effect" and the "pace is fast ... the shocks build beautifully."

Over the next few years, Walker did unaccredited re-writes for films such as Paul Anderson's Event Horizon (1997), Fincher's Fight Club (1999), and David Koepp's Stir of Echoes (1999). Walker was also involved in writing an early draft of Bryan Singer's X-Men (2000). Walker also had commercial success, with the sale of his original screenplay 8MM (1999) to Columbia Pictures for an alleged $1.25 million. However, Columbia grew cautious of some subject matter from the film, and began to pressure Walker into making changes on the script. Walker thought that these changes would be unnecessary when Joel Schumacher agreed to direct the film, but Schumacher simply made changes of his own, rearranging the script and doctoring scenes to lighten the film as a whole. In light of Schumacher's breach of trust and following a well-publicized argument, Walker walked off the set and refused to watch the film (which opened to scathing reviews and disappointing box-office returns).

After this disappointment, Walker went on to adapt Washington Irving's The Legend of Sleepy Hollow for Tim Burton's eerie 1999 film Sleepy Hollow. Although Burton admired Walker's work, he still hired Tom Stoppard to again cut down its dark violence. Walker then wrote two installments of the BMW promotional short-film series The Hire (2001). In the first, John Frankenheimer's Ambush (2001), its lead Clive Owen must protect his passenger from mysterious masked gunmen who accuse the man of smuggling diamonds. In the second, Wong Kar-Wai's The Follow (2001), Owen is hired by Mickey Rourke to spy on the actions of his wife. Both films premiered on the BMW film site, and enabled fans to anticipate Walker's next projects.

Walker is still a major figure in the screenwriting business. He wrote the screenplay for Wolfgang Peterson's Batman Vs. Superman, but unfortunately the film was shelved when director Bryan Singer announced that he would be directing the next Superman movie instead. Walker wrote the screenplay for The Wolfman (a remake of the Universal Studios classic). The film, which came out in 2010, was directed by Joe Johnston and stars Benicio Del Toro in the title role.