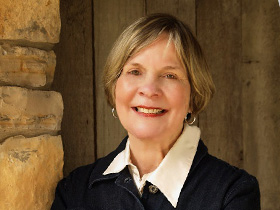 A widely-published poet, Jeanne Murray Walker received her doctorate from The University of Pennsylvania.

Born in Parkers Prairie, Minnesota on May 27, 1944, Jeanne Murray Walker is best-known as a poet and playwright. Attending such prestigious schools such as Loyola University and The University of Pennsylvania, Walker earned a PhD in English in 1974. Her love of writing is evident as Walker has over 500 published poems since 1963. At the time of this writing, she lives in Merion, Pennsylvania. She also holds writing conferences around the country and world, including England, Canada, Australia, and Romania. She has won several awards for her poems and plays and hopes to continue her passion of writing albeit through poems, plays, or essays.

Jeanne Murray Walker was born on May 27, 1944, in Parkers Prairie, Minnesota, to Erna Marie Aderhold (Murray) and John Gerald Murray. By the time Jeanne was born, the Murray family was well-known in the small town of Parkers Prairie. Jeanne's father was president of the local School Board and a deacon in the First Baptist Church, while her mother was a member of the Roto Club. The Murray name was very recognizable in Parkers Prairie not only because of the small size of the town (approximately 900 people), but because the Murrays had lineage directly tied to the community. The Murrays were descendants of one of the founding families of Parkers Prairie dating back to the mid-1800s. Jeanne's grandfather had opened a general store that became quite popular in the area. It had attracted consumers from three neighboring counties and served as a gathering place for those in the surrounding community. By Walker's birth in 1944, the store was controlled by her parents and according to Jeanne, "I was made very conscious that I was one of the Murray children."

Despite their strong ties to Parkers Prairie, the Murrays moved to Lincoln, Nebraskain 1952 after a trip through the Midwest. Although the family knew no one there, her parents decided to move there so their children would have the opportunity to attend a respected university. When the family arrived in Lincoln, Walker's mother obtained a nursing position at a local hospital while Walker's father stayed at home, as advised by his doctors, due to a terminal heart condition. Even with such limiting circumstances, her father found time to design architectural plans and build a house on the outskirts of the city. He also helped to found The Lincoln Christian School when he wasn't building. The strong family values and ideals that Jeanne's parents believed in profoundly influenced her work ethic.

When she was 13, Walker's father passed away after succumbing to his heart condition. Later, her brother also passed awayof unknown causes at the age of eighteen. After her father's death, her mother got a job as a high school nurse and raised Walker and her two other siblings on her own. Walker attended the Lincoln Christian School until she reached eighth grade when she transferred to the Lincoln Southeast High School. It was there where she discovered her love of literature and graduated high school. In her junior year in high school, her first poem was published. Although Walker cannot exactly remember where it was published, she "carried the magazine with me for weeks and read the poem over and over."

In 1962, Walker enrolled in Wheaton College (Wheaton, Illinois) and earned her Bachelor's degree in Education. In 1962, she married Kent Walker with whom she would have her first child, Molly Juliann. After graduating from Wheaton in 1966, Murray taught a sixth grade class for a year. Then she returned to school to earn a Masters in English from Loyola University in Chicago in 1969. At the time, Walker decided against obtaining a PhDin English and says that she was "unwilling to do PhDwork unless it was absolutely necessary." Therefore, she tried teaching again, instructing eleventh grade students at Alexis I. DuPont High School in Wilmington, Delaware. After some reconsideration, she later returned to school and earned her PhDin English from the University of Pennsylvania.

While attending the University of Pennsylvania, Walker fell in love with the city of Philadelphia. "I love the whole city—the cheek-by-jowl crazy-quilt of diverse neighborhoods, each with its distinct architecture, foods, and history," recalled Walker. Her favorite section of Philadelphia is a place called Powelton Village. She is especially fond of the Victorian architecture in this part of the city. Many Powelton Village residents accept the hassles of mansard roofs because they revere Victorian architecture—a peculiar quirk Walker adores most.

Walker's poems have been featured in numerous publications, including most recently in Blackbird, The Christian Century, and The Southern Review. Her poem "So Far, So Good," from Gaining Time, was selected for publication by the Public Poetry Project of the Pennsylvania Center for the Book in 2005.

Her work has also appeared on buses and trains with Poetry in Motion. She continues to be a frequent contributor to Poetry, The American Poetry Review, The Georgia Review, The Kenyon Review, The Nation, and Image. In all, she has had over 500 poems published in a variety of notable journals.

Walker has also written a memoir, The Geography of Memory: A Pilgrimage through Alzheimer's. The Geography of Memory was published in 2013 and, as described on her website, "speaks with compassionate wisdom about the gifts that wait to be discovered even in the midst of this grim disease." With Darryl Tippens she co-edited the anthology, Shadow and Light: Literature and the Life of Faith (2013).Helping the Morning: New and Selected Poetrywas published in 2014 with Word Farm Press.

Walker is also the author of several plays, though she admits she only writes them when commissioned by a theatre, which is a delightful occurrence for her. One of her plays, The Queen's 2 Bodies, was the Winner of the CITA Competition in 2000, and her play Tales From the Daily Tabloid (2002) is reviewed by The Guardian as having "Powerful lyrical passages."

Her work has been honored with many prizes and awards, including an Atlantic Monthly Bread Loaf School of English Fellowship, a National Endowment for the Arts Fellowship, eight Pennsylvania State Arts Council Fellowships, the Prairie-Schooner Reader's Choice and Strousse Awards, many new play prizes, and the prestigious Pew Fellowship in the Arts. She has appeared on PBS television, is frequently interviewed on the radio, and served as Poetry Editor of Christianity and Literature for 20 years.

At the time of this writing, Walker lives in Merion, Pennsylvania, with her husband, E. Daniel Larkin III, a lawyer, whom she married in 1983. Together they are parents to children, Molly and Jack, and have three grandchildren.

Thanks to a program she helped to design, Walker accompaniedUniversity of Delaware students to London for a Study Abroad program, particularly for theatre. She still serveson the Editorial Boards of Image and Shenandoah magazines and is a member of the Creative Writing MFA faculty at Seattle Pacific University. She is often busy traveling across the United States and abroad giving readings and lectures and heading workshops.