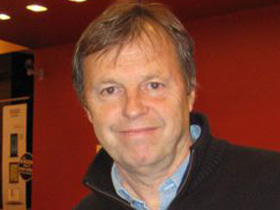 Honesdale's Rich Wallace was born in 1957 in New Jersey. While working as a journalist in high school, college, and post-college, Wallace honed his writing skills. He was hired by Highlights for Children, which brought him across the Delaware to Pennsylvania. At the time of this writing, he edits the magazine and writes acclaimed sports novels for young adults.

Wallace was born in Hackensack, New Jersey on January 29, 1957, and was raised by his college-educated parents, Bob and Genie Wallace, along with six brothers and sisters. He is now married to Sandra Wallace, with whom he raises his sons Jonathan and Jeremy, his children from a late marriage.

In high school, Wallace began to write comprehensively in his diaries while working on his school's newspaper. As a student at Montclair College, he took creative writing classes, one of which required him to write a novel. Additionally, he interned at the Herald News, where he was later offered a paid writing and reporting position. Though Wallace focused most of his energy on the track and cross-country teams during his college years, he was still able to graduate with a BA in 1980. He continued to establish his newspaper career over the next eight years, working as a sports reporter, news editor, and assistant city editor at a number of New Jersey newspapers. In 1988 Wallace became a copy editor for Highlights for Children. Currently, he is a senior editor at the magazine and a publisher of children's books.

Wallace is recognized as a children's book author who writes primarily about sports. In several of his books, sports represent a metaphor for life. He encourages children to strive to do their best and realize their potential despite mistakes that are made during their pursuits. Wallace's most praised literary works have been Playing without the Ball (2000), Shots on Goal (1997), and Wrestling Sturbridge (1996). In 2005, he released the first book of theWinning Season series. He also started an illustrated series entitledKickersin 2011. His most recent novel,Bound by Ice (2017), was co-authored by his wife Sandra Wallace.

At the time of this writing, Wallace lives in Honesdale, Pennsylvania.