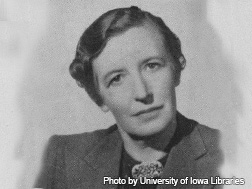 Born on June 4, 1895, Nora Waln grew up in Grampian Hills, Pennsylvania, the author and journalist always had a strong interest in Chinese Culture. After leaving Swarthmore College at the beginning of World War I, Waln sailed to China where she lived with the Lin family for 12 years. In 1933, Waln's bestselling House of Exile was published and received much acclaim. In 1934, Waln moved to Germany with her husband. Subsequently she published Reaching for the Stars (1939), a book on her time in Nazi Germany. Waln also worked as a foreign correspondent, contributing articles to The Saturday Evening Post and Atlantic Monthly. She spent her last years in Malaga, Spain and died on September 27, 1964.

Descended from a line of Quakers and sea captains, Nora Waln was born to parents Thomas Lincoln and Lillian Waln, on June 4, 1895, in Grampian Hills, Pennsylvania. Waln grew up with two brothers, Robert and James Waln, and three sisters, Emma, Mabel, and Ann Waln. During childhood, she developed a fond interest of Chinese culture after learning of a family friendship with the Lin family resulting from trading in the early 1800's. In 1919, she began attending Swarthmore College, a liberal arts college founded by Quakers, near Philadelphia. While studying at Swarthmore, Waln was contacted by two members of the Lin family, who were traveling in the United States. They invited her to visit at their Hopei Province homestead in China. During her junior year at Swarthmore, World War I broke out and Waln left school, before graduating.

In 1920, Waln set sail for China. Upon arrival she was taken in by the Lin family as a "daughter of affection." Waln ended up living in the Lin house for 12 years and subsequently developed the idea for her memoir House of Exile (1933). The family was considered "exiles" of the Canton Lin homestead because a Lin had been ordered by Kublai Khan, the Mongol Emperor from 1260 to 1294, to help work with the Grand Canal in Hopei.

While living in China, Waln met George Edward Osland-Hill, an English Foreign Service Officer whom she called "Ted." They were married in Shanghai at the Cathedral for the Church of England in 1922. In 1933, Waln's House of Exile was published with much esteemed praise. The twelve year memoir of her time spent in China as the adopted "daughter of affection" gave readers an inside look at Chinese culture and customs, such as the "Farmers Calendar," in addition to the nation's political and public hardships. Waln had been the first foreigner inside of the Lin home since its founding 650 years prior. The 1933 bestseller not only unobtrusively captured the view of daily life in the Lin household, but also reflected Waln's insider view of the overthrow of the Manchu dynasty. In an October 1992 issue of The Kansas City Star, writer Karen Brown highly praised Waln's House of Exile:

Historians can tell us what happened, but there's no intimacy to it. Nora Waln gives us that intimacy. She weaves a tapestry as intricate and exquisite as any of the Chinese creations she describes. Through her, we know not only Chinese life but also we are given an insight into "the Chinese mind."

Waln's husband, who had one child, Marie Osland-Hill Wade, from a previous marriage, retired from the service and became interested in studying music, so in June 1934, the family relocated to Germany. They arrived only two days before the "Blood Purge of 1934," also known as the "Night of the Long Knives" or "Operation Hummingbird," in which the Nazi regime conducted a succession of political executions in order to sort out potential resistance of Adolf Hitler. The "Blood Purge" began on June 30, 1934, and lasted until July 2, 1934. From the very start of Waln's time in Germany, she experienced much of Hitler's Nazi movement. She felt compelled to recount her experiences and began working on her next book.

Waln and her husband stayed in Germany until 1938, after which they traveled back to Osland-Hill's native England. They left only briefly before the "Night of Crystal," or "Kristallnacht," on November 9th and 10th 1938. The result of government outrage to the murder of German diplomat Ernst vom Rath, caused the torching of over 400 synagogues and 7,500 Jewish businesses, 91 Jews were killed and an estimated 20,000 sent to concentration camps.

In 1939, Waln published Reaching for the Stars, an account of her time spent in Germany. In the book Waln shared her very optimistic view that the people of Germany would not allow Hitler's National Socialism to last. She based her beliefs on Chinese political theory, following the notion that such an educated people would revolt after the realization of the dangerous communism in the works.

By the end of World War II, however, Waln was less certain as so many of those who were strongly against the Nazis had been killed. Reaching for the Stars was a bestseller in the United States and was reissued in 1994 under the title The Approaching Storm: One Woman's Story of Germany 1934-1938 (1993).

In 1940, Waln was granted an honorary degree of Master of Arts form Swarthmore College. Her stepdaughter, who graduated from Swarthmore in 1940, received the award in her absence. Waln traveled a great deal throughout the 1940's, seeing Asia, Europe, and the Americas. After the war, she lectured across the United States, giving 90 speeches, including one at Swarthmore College; all of the proceeds went to war relief funding. In 1946, Waln became the European Administrator for the Kappa Kappa Gamma fund for Refugee Children.

Waln contributed articles as Tokyo correspondent for the Saturday Evening Post from 1947 to 1951. She also contributed to Atlantic Monthly as a correspondent from Germany and Scandinavia, after which she freelanced. Waln was one of the few journalists to report from China and Mongolia. In 1958, Waln's husband passed away. She spent her last three years residing near Malaga in Southern Spain. Nora Waln died on September 27, 1964.

Waln's House of Exile was republished in 1993, after six new chapters were found and added that year. The pages, originally written in 1947 as the beginning of sequel, were found with Waln's personal papers. Her purpose in writing House of Exile, according to the foreword of the book, was "to tell of everyday life in a Chinese family." Reviewer Brown felt that: "She does this so well, and in such unobtrusive detail, that it's like experiencing life along with her. The book is filled with facts, yet it reads like a novel."