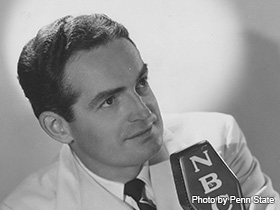 For almost 70 years, Fred Waring was an important figure in choral music production and composition and was known as the "the man who taught American how to sing." Waring revolutionized the way audiences viewed choral singing. Born in the early 1900s and dying in 1984, Waring dedicated himself to music for almost a century. Waring married three times and was father to five children. His choral group, Fred Waring and the Pennsylvanians, won critical acclaim and soon became Waring's sole focus and career. Waring's popularity and musical prestige allowed for many friendships and contacts to be established, which included Frank Sinatra, Bing Crosby and President Eisenhower. In 1983, shortly before his death, Waring received the Congressional Gold Medal from President Ronald Reagan, for appreciation of his musical contributions. Waring died in 1984 shortly after suffering a massive stroke in State College, Pennsylvania.

Fredric Malcolm Waring was born on June 9, 1900, in Tyrone, Pennsylvania. The third child of Jesse Calderwood and Frank Waring, Fred was the wittiest of the bunch; known to never crack a smile when telling a joke. As a child, Fred was incredibly enthusiastic always looking for an adventure. He quickly became interested in the Boy Scouts and persistently attended meetings even though he was not old enough to join. At 12, Waring became leader of the Boy Scout Drum Corps. As a teenager, Fred's goal was to attend Pennsylvania State University (then known as Pennsylvania State College) and become an active member of the glee club. Both dreams seemed unattainable, however, since his father would not support him financially and because he was rejected from the glee club after trying out. Fred then took on a bakery job to pay for tuition and dismissed his rejection as a result of "college politics" due to tension that existed between Waring and Dr. Clarence Robinson. Robinson was the faculty member directing the Penn State Glee Club, and tension was said to arise between the two individuals as a result of Waring's strong leadership demeanor and the success of his Banjo Orchestra. Yet, Waring was later reluctantly allowed to join the glee club for its Christmas Tour since the tour lacked a novelty act, and since Waring conveniently knew how to play a saw. Waring's Banjo Orchestra's popularity was so high that Waring decided to abandon his education altogether to pursue touring with the band on a more consistent basis.

Waring's Orchestra continued to grow and soon became known as Fred Waring and the Pennsylvanians. In 1923, Waring married his college sweetheart, Dorothy McAteer and later divorced in 1930. In 1933, Waring married again to Evalyn Nair, had three children, then later divorced in 1954. In the 1930s, Waring's orchestra had grown to an astonishing 55-piece orchestra and had attained a six-month booking at the famous Roxy Theater in New York City along with its very own radio program.

Aside from music, Waring was a talented innovator; in 1933 Fred Osius invented and patented the common household blender with Waring's financial help. However, Osius' blender had many technical defects and as a result Waring took it upon himself to redesign the blender. In 1937, the Waring Blendor made its debut to the public at the National Restaurant Show in Chicago and sold for $29.75. Besides his musical group and his new found invention, Waring soon became interested in the educational aspect of choral singing.

In 1943, Waring started his own music publishing company, Words and Music, which was later changed to Shawnee Press when he moved to Shawnee-on-Delaware. Waring's publishing company soon became one of the largest worldwide known publishers and sellers of choral music. Following the establishment of his publishing company, Waring started yearly workshops for music educators and young musicians in 1947. With Robert Shaw as his conductor, Waring also formed a male chorus separate from the Pennsylvanians. Waring's popularity even led to a television show, The Fred Waring Show, on CBS in 1949. In 1954, Waring married one last time to Virginia Morley; they had one child together and Waring adopted Virginia's son from a previous marriage.

The early 1950s brought President Eisenhower to office and Waring came to know Eisenhower through the president's brothers, Ed and Milton Eisenhower. At the time Eisenhower was president of Columbia University. The two men quickly formed a strong bond since they both shared many common political principles. This helped in Eisenhower's run for presidency in 1952 when Waring used his celebrity status for Eisenhower's campaign.

Aside from Waring's relationship with President Eisenhower, Waring had many friends in high places. His popularity and the prestige of his musical group allowed for many contacts to be established. One notable musical personality associated with Waring was Bing Crosby. Waring and his Pennsylvanians performed along side Crosby for many musical programs. Early in 1935 after realizing that radio stations were airing his music without cost or recognition, Waring with the support of Crosby assembled the National Association of Performing Artists (NAPA). NAPA's goal was to prevent the unauthorized playing of any records over the air. Besides Crosby, Waring also made musical collaborations with Frank Sinatra. Moreover, Waring's friends were not only limited to musical personalities.

In the 1940s, American cartoonists banded together to form the National Cartoonists Society and after Waring was featured in a New York Herald Tribune strip by cartoonist Mel Casson, he invited members of the NCS to his golf resort, Shawnee-on-Delaware. Waring had always been a fan of the "funnies" and soon the NCS was gathering at the Shawnee Inn one weekend every summer for Waring's birthday. Many cartoonists made personalized cartoons for Waring; many of the drawings were later turned into table tops.

Throughout his life, Waring received plenty of recognition for his musical work, inventions, and devotion to the public. He is commemorated by a star at 6556 Hollywood Boulevard on the Hollywood Walk of Fame. Perhaps the most prestigious award was the Congressional Gold Medal, he received in 1983 from President Ronald Reagan.

A year after receiving this great award, Fred Waring died on July 29, 1984, after complications following a massive stroke shortly after completing his final summer workshop at the Pennsylvania State University.

Shortly before he died, Waring designated Penn State to house his collection of archives. The Fred Waring Collection, known as Fred Waring's America, contains the historical memorabilia, music library, recordings, scrapbooks, photographs, cartoons, and business and personal correspondence that reflect his nearly 70 year career as a choral conductor, showman, and pioneer of show business. The collection is housed in 313 Pattee Library and is open to the public.