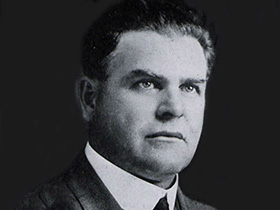 Glenn Scobey Warner was born in Springville, New York, on April 5, 1871. At the age of 21, Warner attended Cornell University and graduated with a degree in law. Warner began playing football, due to an unexpected meeting with the coach, and he earned his nickname "Pop" for being the oldest player on the team. After graduating, Warner practiced law in Buffalo, New York, for a short period of time.

In 1895, Warner was hired by the University of Georgia as head coach. Due to a lack of players, his team lost four out of seven games during the first year. The second year turned out much better for Warner as he led his team to an undefeated season. He returned to Cornell in 1897 to coach, leading them to a 15-5-1 record for two years in a row. In 1899, he began coaching at the Carlisle Indian School. After coaching there for five years, his team was very good and held a record of 11-2-1. He returned to Cornell to coach for three years then decided to go back to Carlisle. When Warner returned to Carlisle, he discovered Jim Thorpe, the greatest athlete Warner has ever coached. During the eight years he coached there his teams only lost four games total. Although Carlisle was a great team, Warner left in 1914 to coach at the University of Pittsburgh for a higher salary. At Pittsburgh, he coached the team to 33 straight victories and two national championships.

In 1924, Warner moved to Stanford University and coached the team to three Rose Bowl championships and an undefeated season in 1926. Warner's best player in Stanford was Ernie Nevers. There is great debate between who was a better athelete: Ernie Nevers or Jim Thorpe. Warner believed Ernie Nevers always gave 100 percent, but also said that when Thorpe gave his all, he was unstoppable. In 1933, Warner began coaching at Temple University. He coached there for five years and had only one losing season. While coaching at Temple, Warner met Joe Tomlin, who had created a youth football organization in 1929 and wanted to rename it in Warner's honor. This created the Pop Warner Conference of Philadelphia, Pennsylvania, the first organized youth sports program. It was the main foundation for the national program, Pop Warner Little Scholars, Inc., which was created in 1959. This program is the only youth sports program that requires students to get good grades in order to play sports, including football, cheerleading, and dancing. In 1938, Warner retired. Warner was seventh on the list of college coaches for most wins with a record of 319-106-32.

On July 26, 1954, Warner was in Palo Alto hospital in California for an operation on a tumor. On September 6, 1954, the doctors reported Warner's health as "failing fast." On September 7, 1954, Glenn Scobey Warner died in Palo Alto, California. In his honor, two 32-cent stamps were created in a four stamp set including Bear Bryant, George Halas, Vince Lombardi, and Warner. Warner was also inducted into the College Football Hall of Fame.