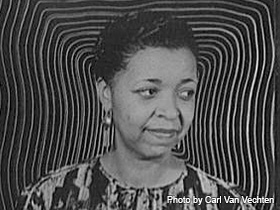 Waters was a groundbreaking African American singer and actress. Her successful career is detailed in her autobiography His Eye is On the Sparrow.

Born in Chester on October 31 1900, Ethel Waters was an African American singer and actress famous for her style of "blues" as well as for leading the way for black entertainers of her time. Her career peaked during the roaring 1920s and continued throughout the 1930s during which time she completed the majority of her 259 recordings. Waters is best known for her performance of "Stormy Weather" at the Cotton Club in New York City, as well as her role of Hagar in On with the Show. She is also known for writing two critically acclaimed autobiographies, His Eye is on the Sparrow, which focuses on her beginnings and achievements as an entertainer, and To Me It's Wonderful, which describes her participation in the Billy Graham Crusades that she toured with in her later years. Waters died in 1977 of heart disease.

Ethel Waters was born the daughter of Louise Howard, on October 31 1900, at her great-aunt Ida's home in Chester, Pennsylvania. Waters was a product of rape. At the age of 13, Waters' mother was raped by John Waters (pianist). Waters said about her childhood, "I never was a child. I never was coddled, or liked, or understood by my family. I never felt I belonged. I was always an outsider." Waters' never had a relationship with her mother. Louise Howard moved away when Waters was a child, leaving her to the care of her grandmother, Sally Anderson. However, Waters' spent most of her time with her aunts, Vi and Ching, because her grandmother worked long hours.

Though both alcoholic with terrible lifestyles, Waters' aunts loved to sing. Waters wrote in her autobiography, Eye is on the Sparrow: "Vi had a sweet, soft voice. Ching's was bell-like and resonant...One of the first pieces I remember Vi singing was 'I Don't Want to Play in Your Yard.' Ching's favorites were 'There'll Come a Time' and 'Volunteer Organist.' But in the beginning it was always the story in the song that enchanted me." These last few words explain Waters' style of singing more than anything else. Waters was always able to tell a story with her music, though she would not figure this out until later in life.

As a young girl, Waters was exposed to a lot of negative things. She befriended a prostitute and witnessed the sexual relationships of her older sisters (they all shared a room). She grew up fast. Though she was exposed to these things, she didn't allow them to influence her. Waters' first steady job was at the Harrod Apartments in Philadelphia. She was a maid—a very humble job compared to what she would soon land. On October 17 1917, Waters' seventeenth birthday, her friends convinced her to perform at a Halloween party. She sang a blues ballad which the crowd and a black vaudeville team (a group who would perform variety shows), Braxton and Nugent, loved. They approached her after the show and offered her $10 a week to join their team. Waters then began her steady ascent to fame.

Her first performance was in 1917 at the Lincoln Theater in Baltimore. She sang solos and was known as Sweet Mama Stringbean because, "I was so scrawny and tall." Though the crowd was tough, and often louder than the performances, Waters' voice would always capture the audience. One night Waters decided to add a new song to her show. She took the song, "St. Louis Blues" and sang it more slowly, with more pathos. She says, "You could have heard a pin drop in that rough, rowdy audience." Her version of the song is now a classic and known to be the greatest blues song every written.

However, she was not involved with the most honest people. Waters soon found out that Braxton and Nugent were pocketing extra money from her act. At the time two other females were performing with Braxton and Nugent, as the Hill Sisters. After finding out about the scam Waters immediately left and the Hill Sisters followed. They decided to travel together as their own act.

They performed the same songs they did in Baltimore. One of them was Waters' famous song, "St. Louis Blues." They moved from theater to theater, performing for a different crowd every time. Though the Hill Sisters had good times, the trio did not last. The original Hill Sisters, Jo and Maggie, were jealous. There was backstage rivalry which stemmed from Waters' success. Though they were a trio, Waters soon felt singled out and unwanted.

The trio turned into a duo, with just Jo and Ethel Waters. Though they traveled and sang together, Waters often took the spotlight. Once, Waters landed a job at 91 Decauter Street in Atlanta. That same night, Bessie Smith was on the bill. Smith had a lot of say with the managers, and forbid Waters to sing any blues while Smith was there. However, during Waters' performance, the crowd began to shout, "Blues! Blues! Blues! Come on, Stringbean, we want your blues!" The manager was forced to revoke the ban placed on Waters. Bessie Smith personally gave Waters permission to sing "St. Louis Blues" and said to Waters after the show, "Come here long goody. You ain't so bad. It's only that I never dreamed that anyone would be able to do this to me in my own territory and with my own people. And you know damn well that you can't sing worth a--" Waters had come into her own. She was a one-woman act.

"I still had no feelings of having roots. I was still alone and an outcast," Waters says about her time with the Hill Sisters. After being injured in a car accident in 1918, Waters went back to Philadelphia. She placed her singing career on hold and began washing dishes at an automat. She did this until Joe Bright, a black actor-producer from New York, persuaded her to go back on stage. Wearily, in 1919, Waters accepted Bright's offer and performed at Lincoln Theater in Harlem. It was during her second week at Lincoln Theater that her acquaintance, Alice Ramsey—a dancer—invited her to sing at Edmund's Cellar. Waters began working there for $2 a night.

Her salary came from the audience in the form of tips. There were no set hours for work. Waters said, "There was no set closing time...I used to work from nine until unconscious." Again, she changed her style of singing. Andrea Barnett writes in All-Night Party, "A pianist, Lou Henley, challenged Ethel to expand her repertoire, urging her to tackle more complex, 'cultural' numbers. But to Ethel's surprise, she found that she could characterize and act out the songs just as she did with her blues. Audiences were enthusiastic." More and more people would come to Edmond's Cellar to watch Waters perform and tips became so good that musicians all around Harlem began looking for a chance to perform there. Waters' finally began making a name for herself. Waters even went to Chicago at the request of Al Capone, who wanted her to sing at his bar. In 1929, with James P. Johnson as her accompanist, Ethel was singing songs like, "Am I Blue?" in On with the Show, where she was now making $1250 per week!

In All-Night Party, Andrea Barnet says, "Ethel's versatility and inventiveness were beginning to serve her well. She had the sexual swagger of singers like Bessie Smith and Ma Rainey, yet her voice was softer. Ethel's style was crisp and urbane, more northern." She soon was noticed by Black Swan Records. She began recording with them and released a record with two sides. "Oh Daddy" and "Down Home Blues" were on that record, which sold 500, 000 copies in 6 months. Waters had recorded with pianist, Fletcher Henderson. The duo was so successful that they toured through the South and became the first black musicians to broadcast on the radio. Ethel continued to perform with various artists: female pianist, Pearl Wright, dancer, Ethel Williams (suspected to be her lover). She was living a lavish lifestyle, but her music never reflected her extravagant lifestyle. Instead, they reflected a more negative side of Waters' adult life.

Ethel Waters held a few rocky relationships in her lifetime. She once dated a drug addict and thief. She married and divorced three times, though she rarely talks about two of her marriages. There are also rumors that Waters was bisexual. Though she tried to keep this private, she was often seen fighting in public with whichever girlfriend she was with at the time. The nature of her relationships was often reflected in her music; her songs are full of heartbreak. There was also another aspect of Waters music that must be noted. According to Barnet, "...besides the sweeter quality of her voice, she was just as likely to take a more droll, comedic view of male-female relations, making mischievous sport of both sexes." Though singing was a great part of Waters career, she also became an actress.

Waters acted in a number of films and Broadway plays. In Waters' opinion, her greatest role was that of Hagar in Mamba's Daughters on Broadway in 1939 where she gave 17 curtain calls on opening night. In Mamba's Daughters Waters plays a woman sent to exile after committing a minor crime. Consequently, she has to leave her daughter, Lissa, to the care of her mother, Mamba. Years later, Hagar must make one more sacrifice for her daughter, who is on her way to fame and fortune. She felt that Hagar paralleled her own mother's life, and she put all of the emotion that she had into each performance. She was also the first black woman to ever star in a dramatic play on Broadway. In 1950, she was nominated for an Academy Award for Best Supporting Actress in Pinky. In the movie, she plays the grandmother of Pinky, a young light-skinned woman, who passes for white while attending school in the North. In that same year she won the New York Drama Critics Award for her role in the play, The Member of the Wedding. Her co-star was the actress Julie Harris. Waters continued to land a number of roles in films and plays. She performed in Cairo (1942), Cabin in the Sky (1943), The Member of the Wedding (1952) and was even a guest on "The Tonight Show Starring Johnny Carson" in 1972.

Ethel Waters' career began to slow as the blues began to fade out of pop culture, but she was able to continue her career largely because of her ability to identify with the characters she played and the songs that she sang. Waters died on September 2, 1977, in Chatsworth, California. She will always be remembered for her incredible vocal and theatrical performances, and for being a woman who broke racial boundaries by playing in black and white vaudeville companies and earning equal praise in both.