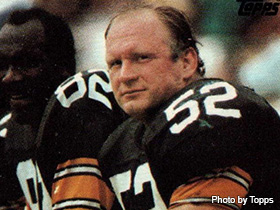 Steelers center Mike Webster entered the Hall of Fame in 1997.

Michael L. Webster (Mike) was born in Tomahawk, Wisconsin, on March 18, 1952. He played football at the University of Wisconsin-Madison and was drafted into the National Football League by the Pittsburgh Steelers in 1974. He played for the Pittsburgh Steelers and the Kansas City Chiefs. He won four Super Bowls throughout his career. After he retired, he started to have many side effects from his football career. He applied for disability benefits, but only received degenerative disability benefits. He died on September 24, 2002, in Allegheny General Hospital. His case encourages many football players to fight for their benefits.

Michael L. Webster (Mike) was born in Tomahawk, Wisconsin on March 18, 1952. His father, William Webster, grew up in Harshaw, Wisconsin. Webster had two brothers, Reid and Joe. They lived together on a 640-acre potato farm and this is where Webster spent most of his childhood. During Webster's junior year of high school, he became interested in football and started playing for his high school football team. He ended up winning a scholarship to the University of Wisconsin for football and he took it. During the 1974 National Football League (NFL) draft, Webster was picked in the fifth round by the Pittsburgh Steelers.

Webster played as an offensive lineman in the NFL from 1974- 1988. He spent 15 seasons with the Pittsburgh Steelers and two seasons of his career with the Kansas City Chiefs. When Webster first entered the NFL, he gained the name "Iron Mike" because of his eagerness to play the game. According to Don Pierson, former Steelers coach Chuck Noll stated, "He was the best center in the history of the game." He was the lineman every player wanted to be with his whole hearted spirit and enthusiasm. He married his sweetheart Pamela and they had four children together: two sons, Colin and Garrett, and two daughters, Hillary and Brooke.

As Webster grew into a strong professional, he played alongside with other players such as Lynn Swann, Terry Bradshaw, Jack Lambert, John Stallworth and Franco Harris. As said by Frank Litsky, the author of a New York Times article, Bradshaw said, "I couldn't have been the player I was without him." These players looked up to Webster and worked hard as a team together. Throughout Webster's NFL career, he won four Super Bowl Championships and was inducted into the Professional Football Hall of Fame in 1997. According to Litsky, Webster said in his acceptance speech, "You only fail if you don't finish the game, if you finish you won." Webster's speech was very powerful. Webster retired from the NFL in 1990 after his last season played with the Chiefs.

After Webster's NFL career and fame his life turned around drastically. He started to work for a businessman named Steve Truchan in 1991 but failed because he was unable to work due to his knotted hands. According to Chuck Finder, Truchan said, "He couldn't sell; he couldn't talk." Webster suffered from many concussions during his football career, but did not file for disability benefits until later on in his life. After retirement Webster could not work and was unemployed and from time to time he was found living out of his car. At this point his son Garrett moved in with him. In a Pierson article, Garrett said, "He has some brain injuries from football. I have to take care of my dad." Webster started showing many side effects of playing football after he retired. In an ESPN article, Greg Garber states, "His brain showed signs of dementia. His head throbbed constantly. He suffered from significant hearing loss."

Webster was diagnosed with brain damage in 1999, during the time he was forging prescriptions for Ritalin. "He said he was using the drug for treating brain damage caused by repeated head injuries." He was diagnosed by Dr. Fred Kreig and Dr. James Vodvarka. When he was diagnosed, the doctors said he had damage to the frontal lobe. This damage was caused over time from the constant concussions he received in football, which was causing him cognitive dysfunction and could worsen over the years. Webster fought for disability payment once he was diagnosed but his disabilities could only be traced back to 1996 not 1991. On October 29, 1999, the NFL Retirement Board voted he would receive degenerative disability benefits. According to Finder, Doug Ell, the attorney representing the NFL plan, stated, "It was a unanimous 6-0 vote." However, Webster was not happy because he wanted more money. With the help of his family and attorneys Cyril Smith and Bob Fitzsimmons he appealed the decision.

Before the second appeal, on September 24, 2002, Webster was experiencing chest pains and was rushed to Sewickley Valley Hospital. Then he was transferred to Allegheny General Hospital, where he died in the coronary-care unit at the age of 50. Information on the death was not released at first, but was later found to be diagnosed as a heart attack.

The plan board finally answered the second appeal in 2003 after Webster's death and stated there was no evidence found that Webster was disabled before 1996. Webster's estate appealed the board's decision again and went to Baltimore's Garmatz Courthouse. The appeal was denied again and the estate filed suit. Chuck Finder states in his article, "Both sides agree on one thing: The case likely won't go to trial." This case was not just about Webster but for all the NFL players who play in the NFL and the disabilities rights they should receive. According to Caryn Tamber, Webster's attorney Smith states, "Somewhere up there, Mike is smiling about what's happened today." Today, Webster's case encourages all NFL players suffering from concussions years later to fight for benefits.