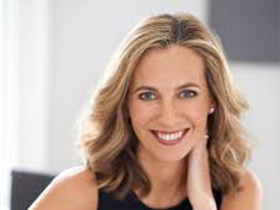 Lauren Weisberger was born March 28, 1977, in Scranton, Pennsylvania. When her parents divorced, she moved to Allentown, Pennsylvania, with her mother and sister. After graduating from Parkland High School, Weisberger attended Cornell University and received her BA in English. She traveled around the world and then returned to the United States to work for Vogue. After her time at Vogue, she has written four novels, and three were New York Times bestsellers. At the time of this writing, she lives in New York and is working on her next novel.

Lauren Weisberger was born on March 28, 1977, in Scranton, Pennsylvania. At age 11, her parents divorced. Along with her mother and her sister, Weisberger moved to Allentown, Pennsylvania, where she attended Parkland High School. She participated in many extracurricular activities including varsity tennis. She graduated in 1995 and then attended Cornell University. She studied English and near-Eastern studies; she also participated in Alpha Epsilon Phi, a sorority, and became a tour guide. After graduating in 1999 with a BAin English, she decided to travel around the world. Carrying only a small backpack, Weisberger traveled through Europe, Israel, Egypt, Jordan, Thailand, India, Nepal, and Hong Kong.

After returning to the United States, Lauren Weisberger moved to Manhattan, New York, and began working. Weisberger's first job was an assistant to the Editor-in-Chief Anna Wintour at Vogue. After Vogue, she wrote reviews for Departures magazine, a high-end travel and lifestyle magazine. While working there, she began taking writing courses at night. She then wrote the The Devil Wears Prada (2003). The novel was published in April 2003, spent a year on the New York Times Bestseller List, and is sold in over 34 countries. Additionally, the novel's popularity piqued Fox 2000's interest, and it was made into a major motion picture, starring Meryl Streep and Anne Hathaway. Weisberger also had a short cameo in the film. The novel centers on a small-town girl who is hired to work as an assistant to a high-profile editor for Runway magazine.

Weisberger's second novel, Everyone Worth Knowing, was published in October 2005. The second novel also appeared on the New York Times Bestseller List. This novel is about a young woman who feels claustrophobic in her cubical desk job. She quits her job and lands a new one with a hot Public Relations firm. She finds herself caught up in a world of fashioned, celebrity, and party obsessed people, and she begins showing up in gossip columns, soon realizing that her personal and professional lives merge into one. The Cleveland Plain Dealer states the novel is "...a lot of fun, more assuredly written than The Devil Wears Prada and more confident in its jabs—it's hard to deny its witty, voyeuristic charms.

In 2008, Weisberger published her third novel, Chasing Harry Winston, which was also a New York Times bestseller. It is now being developed into a screenplay.Last Night at Chateau Marmont, was published in 2010.

At the time of this writing, Lauren Weisberger lives in New York with her husband and is working on her next novel.