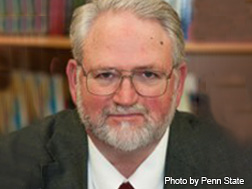 James Lemuel Wills West III was born on November 15, 1946, in Roanoke, Virginia, to two educators. He received his BA and PhD from the University of South Carolina at Columbia in 1968 and 1971, respectively. Throughout his life, West was married twice and he fathered four children. He also taught English at the Virginia Polytechnic Institute and State University and the Pennsylvania State University, University Park for many years. While teaching, West wrote many articles, books, and bibliographies -- he also received many awards for his efforts. At the time of this writing, West lives in State College, Pennsylvania, and teaches graduate-level English classes at Pennsylvania State University.

Born into a family of educators on November 15, 1946, in Roanoke, Virginia, James Lemuel Wills West III began his life with a good education. West's father, James Lemuel Wills, Jr. West, was a college teacher and his mother, Lucy Kate, was teacher in the public school system. West attended the University of South Carolina at Columbia where he received his BA in English in 1968 and his PhD in 1971.

While he was completing his BA,West married Susan Emily Holt; however, they divorced 14 years later in 1980. A year later he married Melinda Page Wilkins; this marriage also ended in divorce 17 years later in 1998. Throughout his married life, West fathered four children: Emily, James Lemuel Wills IV, Thomas, and William. During his marriages and family life, West's career consisted of teaching at two different colleges: Virginia Polytechnic Institute and State University and the Pennsylvania State University. At the time of this writing, heholds the title of Edwin Erle Sparks Professor of English at Pennsylvania State University.

While West was exploring family life and continuing his teaching career, he began pursuing his interest in biographies and writing. West has an extensive list of published works, including two descriptive bibliographies, four books, more than ten scholarly editions, many articles in scholarly reviews, contributions to over 15 works, and many more scholarly accomplishments.

One of West's more recent books entitled William Styron, a Life (1998) is a biography that Random House nominated for the Pulitzer Prize and that received the Los Angeles Times Book Award. The book is a biography of William Styron, writer of the Pulitzer Prize-winning novel The Confessions of Nat Turner, as well as Sophie's Choice. Johanna Berkman, a writer for the New York Times Book Review, praises West's biography on William Styron. She states, "[West] excels in describing the arduous creative process by which Styron developed an architecture for each of his novels."

Another of West's notable biographies is The Perfect Hour: The Romance of F. Scott Fitzgerald and Ginevra King (2005).West took a different route than the popular romance between F. Scott Fitzgerald and Zelda Sayre when he wrote this biography. This book is about Fitzgerald's long distance relationship with the young Ginevra King, and West ascertains that Ginevra King may have been the muse for a few of Fitzgerald's famous women characters in his novels and stories. According to Kristine Huntley, a writer for The Booklist, West's book "is a must-read for Fitzgerald aficionados and literature lovers in general."

Throughout his career, West received many awards for his accomplishments. These awards include the National Endowment for the Humanities Grant, Research Tools, and Editing Program, October 1978-September 1979, for work on the Pennsylvania Dreiser Edition; American Council of Learned Societies Grant-in-Aid, June-August 1981, for work on Dreiser; Guggenheim Fellow, 1985-1986, for study of the interrelationships and cross-influences between the British and American publishing industries since 1840; Fellow, Institute for the Arts and Humanistic Studies, Pennsylvania State University, 1987; Fulbright Senior Teaching Award in American Literature, University of Li?íge, Belgium, October 1989-February 1990; and the National Endowment for the Humanities Fellowship for University Teachers, 1994-95, for completion of the biography of William Styron. However, this list is only an example of the many different honors, awards, and grants that West has received throughout his career.

At the time of this writing, West lives in State College, Pennsylvania, and teachesgraduate-level courses at the Pennsylvania State University, University Park.