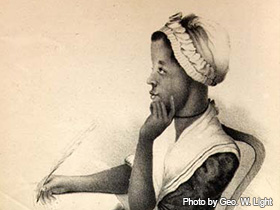 Phillis Wheatley, the great poet and essayist, was first published in Philadelphia.

Phillis Wheatley was a slave to a prominent Boston family who taught her to read and write. She became a well-known poet during her lifetime through patriotic and Puritan poems such as "To His Excellency George Washington." With her owners' deaths taking place soon after they freed her, she was unable to support herself and died in childbirth, leaving behind substantial reflections both on patriotism and against slavery in poems that number over 140 and are still being discovered, studied, and celebrated today. Wheatley was the first African-American to have a book of poetry published.

Phillis Wheatley was among a cargo of slaves purchased from the Senegal/Gambia region of West Africa by Peter Gwinn. Her age was unconfirmed and approximated as seven years old when she was brought to the Boston slave market of John Avery. There, Mrs. Susanna Wheatley, wife of the prominent Boston tailor John Wheatley, purchased her at a low cost due to her frailty and diminutive stature. Wheatley came to the Colonies speaking no English, but the Wheatley family taught her to read and write English and Latin. She was soon enthralled with the Bible, astronomy, geography, history, British literature (particularly John Milton and Alexander Pope), and the Greek and Latin classics of Virgil, Ovid, Terence, and Homer.

Her role as a young woman in the Wheatley family was complex. She had few domestic tasks but remained their property. She had privileges that other slaves seldom had, such as a lighted and heated room, and the family took pride in showing her off to other prominent families in Boston. Biographer Kenny Williams quoted friends of the family as saying that she "dined modestly apart from the rest of the company...where she could certainly expect neither to give or receive offense." Her role was unclear in the family and in society in general: "She inhabited a strange, ambiguous twilight zone between black society and white society, cut off from any normal contact with either, denied the sustenance of group identity."

Wheatley started writing as early as 1765. Her first published piece was believed to be On MessrsHussey and Coffin, a poem about two men who almost drowned in a storm at sea, published on December 21, 1767, inMercury when Wheatley was just thirteen years old. Like many of her later and more famous poems, it alluded to Greek gods and to her own Puritan faith. To the University of Cambridge in New England was thought to be the first poem she'd ever written and was later published in 1773. The poem that brought Wheatley recognition was "On the Death of the Rev. George Whitefield," published in the October 1, 1770, issue of Massachusetts Spy. It appeared in pamphlets and broadsides that were distributed in Boston, Newport, and Philadelphia within the year (and in London the following year). Wheatley forwarded her poem to Selina Hastings,the Countess of Huntingdon who was a wealthy supporter of abolitionists to whom Wheatley had been a chaplain. This gained her Hastings' promotional support and, eventually, international acclaim. Hastings solicited bookseller Archibald Bell to prepare a book with Wheatley for publication.

In 1771, Wheatley traveled to London, accompanied by Nathaniel Wheatley, and was welcomed by nobility and high society in celebration of her forthcoming book. Poems on Various Subjects, Religious and Moral (1773)was the first book of poetry published by an African-American. Wheatley was 20-years-old at the time.

On returning to Boston, however, Wheatley discovered a gravely-ill Mrs. Wheatley. Three months before Mrs. Wheatley's death on March 3, 1774, the family freed Wheatley from slavery. The years that followed were burdensome for Wheatley, who was often ill herself and had, until then, been sheltered from both the treacheries of slavery and the economic discrimination of a free-black existence.

In 1775, Wheatley sent her poem "To His Excellency General Washington" to Washington himself, who responded with a letter of thanks and said that he would "be happy to see a person so favored by the Muses, and to whom nature has been so liberal and beneficent in her dispensations." She did visit him later, months after he was named Commander-in-Chief of the Armies of North America. The Pennsylvania Gazette, edited by Thomas Paine, republished "To His Excellency General Washington" in 1776 as a means of glorifying Washington's deeds. The poem is notable because it coins two common phrases still in use today. Wheatley's reference to the land of Columbus as "Columbia" was later used to describe the capital: The District of Columbia. She also refers to Washington as "first in place and honours" and, as a result of a misprinting, read "first in peace" - now a common phrase in reference to Washington.

Following Mr. Wheatley's death on March 12, 1778, Wheatley married John Peters on April 1, 1778, despite the disapproval of her friends. Peters was an entrepreneurwho'd also been freed from slavery but was often in debt and of little financial help to Wheatley. Poverty-stricken and in poor health, she was unable to publish her second book and had to work as a scullery maid. Despite this, she continued to write and publish single poems, while soliciting the few correspondents she maintained to support her second volume of work, which neither saw publication nor was ever recovered.

Wheatley had three children, two of whom had died by the time she wrote her last published piece to a contemporary but unnamed couple, "To Mr. And Mrs.--- on the Death of Their Infant Son" in 1784. Ultimately, Peters moved his family to a rundown apartment and abandoned his pregnant wife while he dodged creditors and sought employment. On December 5, 1784, Wheatley died during childbirthin a boarding house;she was only 31-years-old. Her remaining child died hours later.

"In a filthy apartment, in an obscure part of the metropolis, lay dying the mother, and the wasting child," Margaretta Matilda Odell lamented in her 1834 biography of Wheatley. "The woman who had stood honored and respected in the presence of the wise and good ... was numbering the last hours of life in a state of the most abject misery, surrounded by all the emblems of a squalid poverty!

Wheatley's life was a cruel contradiction—she flourished while enslaved, writing about the troubling issues of freedom, religion, and patriotism, but she suffered dreadful circumstances in her freedom, resulting in an untimely, inhuman death. Scholars continue to discover more of her work, and it is believed she wrote 145 poems.

"All this research and interpretation has proven Wheatley's disdain for the institution of slavery and her use of art to undermine its practice," states scholar and essayist Sondra A. O'Neale.

"Before the end of this century the full aesthetic, political, and religious implications of Wheatley's art and even more salient facts about her life and works will surely be known and celebrated by all who study the eighteenth century and by all who revere this woman, a most important poet in the American literary canon."