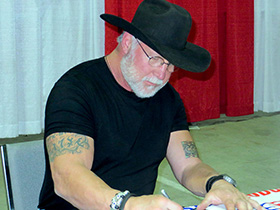 Born on January 15, 1953, Hall of Fame defensive lineman Randy Lee White was a stand-out football player at all levels of competition. This Pittsburgh native was an All-American Defensive Tackle at the University of Maryland. In 1975, the Dallas Cowboys organization drafted White with the number two overall pick in the first round of the National Football League (NFL) draft. During White's career, he won one Super Bowl championship and was selected to play in the Pro Bowl nine times. Now that White is retired from the NFL, he spends most of his time running his business, Randy White's Hall of Fame Barbeque, with his staff in Frisco, Texas.

Randy Lee White was born on January 15, 1953, in Pittsburgh, Pennsylvania. White received his high school education at Thomas McKean High School in Wilmington, Delaware. During his tenure at Thomas McKean High School, he was a standout athlete on the football team. Honoring White's accomplishments as a high school football player, he was named the State of Delaware's Athlete of the Year.

Immediately following his high school graduation, White decided to attend the University of Maryland. In beginning of White's career as a Terrapin, he was moved from the offense as a fullback to the defense as a defensive tackle. The position move by head coach Jerry Claiborne did not take long to pan out for White. The 6'4", 238 pound defensive tackle, who wore the number 94, was referred to by some as "the quickest lineman in the game." At the end of his career as a member of the University of Maryland's football team, White was the recipient of numerous coveted college football awards. Randy White was an Associated Press All American Defensive Tackle in 1973 and 1974 and the Atlantic Coast Conference Player of the year. White was also the recipient of the Outland and Lombardi Awards. The Outland Trophy is awarded to the nation's best interior lineman and the Lombardi Trophy is awarded to the nation's best lineman or linebacker. Honoring White's accomplishments as a member of the gridiron team, the University of Maryland retired his jersey number 94. In 1994, Randy Lee White was inducted into the College Football Hall of Fame.

In 1975, Randy Lee White was selected by the Dallas Cowboys in the first round of the NFL draft as the number two overall pick. White played in the NFL from 1975-1988, a member of the Dallas Cowboys football organization for his entire career. The Cowboys initial intention was for White to play middle linebacker, but after two years of manning the middle of the field, White was moved back to the defensive line. Although he was initially labeled as an undersized defensive lineman, his speed once again was superior to his opponents. Following White's position change, it did not take long for number 54 to become one of the most feared defensive linemen of his time. Due to his tenacious play and unheard of athletic abilities, White's former teammate, safety Charlie Waters, nicknamed him the "Man-ster." Waters described White as, "half-man and half-monster."

In 1978, White had his best season as a Dallas Cowboy, when he recorded 126 tackles and 16 sacks, which led him to being honored as the Defensive Player of the Year. Throughout White's career he was named an All-Pro defensive lineman eight times, and he was selected to play in the NFL Pro Bowl nine times. When White's Dallas Cowboys won Super Bowl XII, he was named the Super Bowl Co-MVP. During White's 14-year career, the Dallas Cowboys played in 210 games, and White only missed one of those games. For a player to stay healthy throughout their entire career is an accomplishment in itself. In 1994, the Dallas Cowboys honored his successful career by inducting him into the Dallas Cowboys Ring of Honor. During the same year, Randy White was inducted into the National Football League's Hall of Fame. Throughout White's 14 years as a Dallas Cowboy, he compiled 1,104 tackles, 701 of them being solo tackles, and 111 sacks. The Official Site of the Pro Football Hall of Fame describes White as possessing "quickness, balance, toughness, ability, desire, and intelligence."