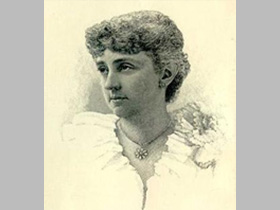 Kate Douglas Wiggin, Phildelphia native, wroteRebecca of Sunnybrook Farm(1903) and its sequels, which were highlights of a successful career that went beyond children's literature.

Kate Smith Wiggin, the author of the famous children's novel Rebecca of Sunnybrook Farm (1903), was born in Philadelphia, Pennsylvania, in 1856. Her time in the Commonwealth was short, since she moved to Maine when she was three years old. Wiggin became an accomplished writer and activist in the kindergarten educational reform movement. She died in England in 1923.

Kate (Smith) Wiggin was born in Philadelphia, Pennsylvania, on September 28, 1856. Her parents were Robert Noah Smith, a lawyer who attended Harvard University, and Helen Elizabeth (Dyer) Smith. Wiggin's father died when she was three years old, and the family moved to Maine where Wiggin's mother later remarried. When she was thirteen, Wiggin began attending Gorham Female Seminary. She became friends with her Latin teacher, Mary Smith, who became the model for Rebecca's teacher in Rebecca of Sunnybrook Farm. Wiggin's family eventually moved to California in 1873, and Wiggin joined them after finishing school. In 1881, she married childhood friend Samuel Bradley Wiggin, a lawyer, who died in 1889. Wiggin married George Christopher Riggs, a textile importer, in 1895.

The death of Wiggin's stepfather in 1876 left the family destitute, forcing Kate and her sister Nora to seek employment. The same year, Wiggin began her literary career by publishing Half-a-Dozen Housekeepers in St. Nicholas magazine, for which she received $150. In 1877, she met Carolina Severance, who advocated the educational practices of Friedrich Froebel, a German educator who had established the first kindergarten forty years earlier. Wiggin enrolled in Pacific Model Training School for Kindergartners, and after graduating, she set up a private kindergarten, the Swallow's Nest. In 1878, Wiggin was selected to be the first teacher at the Silver Street Kindergarten in San Francisco, California, which was the first free kindergarten west of the Rocky Mountains. Wiggin also trained others to be kindergarten teachers, and she was involved with the school's administration. Her experiences as a teacher helped generate much of her writing material around this time. The success of Wiggin's 1883 novel, The Story of Patsy: A Reminiscence, and her 1887 novel, The Birds' Christmas Carol, (both of which were written to raise money for Silver Street Kindergarten) allowed Wiggin to make writing her primary career.

Wiggin is best known for Rebecca of Sunnybrook farm, which was published in 1903. The title character is said to have come to her in a vision while she was recovering from an illness in a New York hospital the same year the book was published. Rebecca of Sunnybrook Farm was later adapted for stage and screenplays. Some of the most popular actors of the time performed in the book's movie adaptations, including Mary Pickford and Shirley Temple. Wiggin's Mother Carey's Chickens (1911) and her series of books featuring protagonist Penelope Hamilton also rank among her most popular books.

Wiggin was named a Doctor of Letters by Bowdoin College in Maine and was an honoree of the New York Kindergarten Association. She was also honored as one of the San Francisco Examiner's most distinguished women in the world.

On August 24, 1923 Wiggin died at a nursing home in Harrow-on-the-Hill, England. In accordance with her wishes, Wiggin's body was cremated and her husband, George Riggs, scattered the ashes into the Saco River. Riggs also placed a marble Celtic cross behind Old Tory Hill Meeting House. The cross was inscribed with the line that Wiggin ended her autobiography with: The song is never ended.