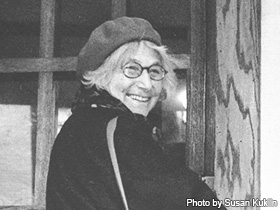 A famed illustrator and writer of children's books, Vera B. Williams kept a summer home in the Poconos.

Vera BakerWilliams was an author and illustrator of children's books. She was most known for her trilogy about Rosa, a young girl from a relatively poor family. She was born in Hollywood, California. Later her family lived in the Bronx in New York City. Williams studied art at the Music and Art High School in New York City, and later went on to receive her BFA in Graphic Arts from Black Mountain College. She studied at the Boston Museum School. Williams received numerous awards during her career as an author and illustrator, including two Caldecott Honors.

Vera Baker Williams was born January 28, 1927 in Hollywood, California to parents Albert and Rebecca Baker. The family moved to the Bronx in New York City. Her father was absent when she was a young child, and Williams speculated that he was in prison. Williams portrayed her close relationship with her sister, Naomi, in Amber was Brave, Essie was Smart (2001), a book of poems about two sisters whose father is in jail. Growing up, the girls were encouraged by their parents to explore the arts. One of Williams' childhood paintings was on display in the Works Progress Administration exhibition at the Modern Museum of Art in New York. At the exhibition, young Vera answered questions from Eleanor Roosevelt, the first lady at the time. While living in New York, Williams studied at the Music and Art High School. This is where she discovered her knack for book design.

After high school she attended the experimental Black Mountain College in North Carolina where she studied art with Florence Cane. She received her BFA in Graphic Art in 1979 from Black Mountain College. Later she studied at the Boston Museum School. She married Paul Williams, and they had three children, Sarah, Jennifer, and Merce, before their divorce in 1970. During their childhood, Williams often enjoyed creating books for her children to read. Williams co-founded the Gate Hill Cooperative Community in North Carolina where she and her family lived with other graduates from Black Mountain College. She served as a teacher for the community from 1953-70 and also co-founded the Collaberg School, an alternative school for children in Stony Point, New York where she taught from 1960-69. After her divorce she moved to Canada and worked at the Everdale School in Ontario as a teacher and cook from 1970-73. Once her children were grown, Ms. Williams committed her time to becoming an author and illustrator of children's books. Later she taught at Goddard College in Plainfield, Vermont from 1980-1982. From 1984-1987 Williams was a member of the executive committee War Resisters League, an organization that emphasizes nonviolence.

Vera B. Williams is not just a children's author and illustrator. During her life she has had a wide variety of accomplishments. Williams summarized her life in the following way:

At various times I have helped start a cooperative housing community, an alternative school, a peace center, and a bakery where young people could work. I have worked to end nuclear power and weapons, and for women's rights. I have demonstrated and been jailed. I have produced posters, leaflets, magazine covers, drawings, paintings, short stories, and poems, as well as books.

Although she wrote books for children, Williams had been arrested on occasion while protesting. When asked about her arrests, she replied:

I don't make a point of ending up in jail, but if you try to put your hopes and beliefs for a better life into effect, arrest is sometimes a hazard. I am asked if I think any of his helps or works. I say, in the short run, we can't know, but many things we take for granted have been gained by the similar actions of people like myself: the end of child labor, more rights for black people, the vote for women, the end of the Vietnam War are a few. As a person who works for children, who raised three children...I have been able to say I did something to try to save our planet from destruction. It is my faith that we will.

While attempting to save the world, Williams managed to establish a successful career as a children's author and illustrator throughout the years.

Hooray for Me!, her first published work as a professional illustrator, written by Remy Charlip and Lilian Moore, was published in 1975. Williams illustrated the book while on her houseboat in Vancouver, BC. Carolyn Phelan praised the illustrations of Hooray for Me! in Booklist:

Larger and livelier than the original (1975) book, which has been out of print, this version of Hooray for Me! gives an old favorite a new look. An upbeat cover illustration invites readers. Inside, new patterned borders in popsicle colors frame and enlarge the pages, and shinier paper gives the artwork a bright glow.

The first book she wrote was It's a Gingerbread House: Bake It, Build It, Eat It! (1978).She was inspired to write this book one Christmas after her children were grown and she had no one to bake with her. Her first book to receive popularity was Three Days on a River in a Red Canoe (1981), which was written in the style of a journal of a fictional young girl. This book received the Parents' Choice Award for Illustrations in 1981.

Vera Williams is most known for her Rosa Trilogy. The first of these books was A Chair for My Mother (1981). The story is about a young Hispanic girl named Rosa who lives with her mother, a waitress, and her grandmother. Throughout the story they save their money to buy a comfortable arm chair for Rosa's overworked mother. A Chair for My Mother was placed on the School Library Journal Best Children's Book List and received a Caldecott Honor, Boston Globe-Horn Book Award, and the Other Award from the Children's Book Bulletin. The second book in the Rosa Trilogy is Something Special for Me (1983). In this story the women are saving money again, but this time it is for Rosa's birthday present. Rosa decides to buy an accordion so that her present will bring joy to the family, not just herself. This book was also placed on the Best Children Book List in 1983. The final book about Rosa was Music, Music for Everyone (1984). In this story, Rosa and her friends raise money for her grandmother's medical care by playing in a band. For this book she received the Jane Addams Children's Book Award Honor, Parents' Choice in Literature Notable Book, and a spot on the Child Study Association of America's Children's Books of the Year list.

Cherries and Cherry Pits was published in 1986. It received honors from the New York Times Best Illustrated Books of the Year and the Boston Globe-Horn Book Award for fiction. Williams has a personal connection with the main character in this story. In an interview, she once said, "I am a person like my character Bidemmi in Cherries and Cherry Pits. I have been impelled from my earliest years to imagine and describe my world in words and pictures." The story is about a young child artist who plants cherry plants in her backyard in an urban neighborhood, creating beauty out of ugliness.

In 1988 she collaborated with her daughter Jennifer Williams to write Stringbean's trip to the Shining Sea. Marilyn Courtot wrote in the Children's Literature Review that the story is "humorous," and, "there are lots of facts painlessly interspersed [. . .]." Similar to Three Days on the River in a Red Canoe, the book has pages from a photo album and post cards complete with stamps to tell the story of the two brothers' trip from Kansas to the Pacific Ocean.

"More, More, More" Said the Baby was published in 1990. She received a Caldecott Honor in 1991 for this book. The Horn Book Guide rated this book "outstanding." The story was directed at a younger audience. Her inspiration was one of her grandchildren. "When I was just in love with my new grandchild I could hardly not write," commented Williams. Appealing to a similar young audience, Lucky Song received praise from critics. The book received the Charlotte Zolotow Award in 1998, and Cooperative Children's Book Center Choices stated Because of the book's joy, affection and beauty, adults won't even mind hearing their children ask them to 'Read it again.'"

Then Williams decided to write for an older audience. Her first novel for young readers, Scooter, was published in 1993. The story is about a girl named Elana Rose Rosen who owns a blue scooter. The story was inspired by Ms. Williams' childhood experience of growing up in the Bronx. She received the Boston Globe-Horn Book Award for Fiction for Scooter in 1994. Again, the Horn Book Guide rated the book "outstanding." Amber was Brave, Essie was Smart was published in 2001 and also rated "outstanding" by the Horn Book Guide.

On October 16, 2015, Vera B. Williams, died in Narrowsburg, New York, at age 88. Her Greenwillow publisher Virginia Duncan has said, "it's impossible to imagine a world without her. She had infectious energy, a one-of-a-kind smile and laugh, and a will of iron. And, of course, there are those books! Äü? all distinguished, all beautiful, all crafted with love and consummate care for children."

In her final days, Williams completed one last manuscript, Home at Last, which wasillustrated by Chris Raschka and published September 2016.