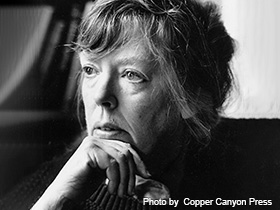 Eleanor Wilner is a poet and a lifelong activist for civil rights and peace. She has written several poetry collections, including the Juniper Prize-winning Maya (1979) and Tourist in Hell (2010). She has an interdepartmental PhD from Johns Hopkins University and teaches peripatetically at such universities as Temple University, University of Chicago, Northwestern University, and the MFA Program for Writers at Warren Wilson College. Her articles and reviews have appeared in countless newspapers and magazines.

Eleanor Rand Wilner was born to Bernard Everett (a lawyer) and Gertrude Rand (an artist). She married physics professor Robert Weinberg and together they had one daughter, Trudy. Wilner earned a BA from Goucher College (Towson, MD) in 1959 as a member of Phi Beta Kappa.

Out of college she worked three jobs over the course of five years as: a reporter at the Baltimore News American (1959-1960), a feature writer for WFBR Radio in Baltimore (1961-1962), and a consultant for the Maryland State Commission on the Aging (1962-1963). She earned her MA from Johns Hopkins University in 1964, and then became an instructor of English at Morgan State University from 1964-1969.

In 1970, Wilner won the Manuscript Award for her poetry from the Writers Conference at the University of Colorado. Between 1971 and 1973, Wilner returned to Goucher College as an instructor before earning her PhDfrom Johns Hopkins University in 1973. The university eventually published Wilner's dissertation on the imagination titled, Gathering the Winds: Visionary Imagination and Radical Transformation of Self and Society in 1975.

Wilner went on to become the editor of the American Poetry Review in Philadelphia from 1975-1977, and was awarded a creative writing grant from the National Endowment for the Arts (NEA) for 1976-1977. Returning to Goucher College again in 1977, Wilner served as an Assistant Professor through 1978, then later became an English lecturer there through 1982.

Her first poetry collection, Maya, was published in 1979 and won the Juniper Prize for Poetry from the University of Massachusetts Press that year. Emily Grosholz's 1980 article, "Poetry Chronicle," in The Hudson Review stated that "[The best poets'] writing exhibits the virtues characteristic of the modern era: the ability to improvise, to entertain, suspend or revise judgment, and to regard what is offered as a foundation as, instead, a problem—a problem which must be taken up and solved again and again. Eleanor Wilner's first book, Maya, is a particularly fine example of such poetry."

Grosholz went on to say that while Wilner's poems are rather long, their richness and complexity never thins and are rewarding to the careful reader. Her Maya poems, taking an almost narrative form, retell myths and parables, are populated by all kinds of bizarre, yet oddly recognizable figures: Pharaoh's daughter (Moses' corrupter), Iphigenia (alive and well in a little village), Henry Adams' wife (a fine repose in stone); as well as many other figures that readers can see as an almost mirror image of themselves.

Wilner provocatively titled her second poetry collection Shekhinah (1984). Maeera Shreiber, in her article "Two Versions of Tradition" for The Women's Review of Books, explains the significance. Shekhinah, in the monotheistic religion of Judaism, designates the feminine manifestation of God. However, "the notion of a feminine divine power is not.. part of the homogenized package of prayers, principles and customs that constitutes most cursory American-Jewish educations," says Shreiber. Wilner wrote the book in an effort to overturn this ideology.

Shreiber lauds Wilner's poetic skill, explicitly stating that because women are virtually denied the right to write in the Jewish community, Wilner's Shekhinah is all the more important and meaningful. "This poet makes a place for herself in the context of a tradition that is inherently inhospitable to women writers," writes Shreiber, "not simply by evoking Jewish holidays or Biblical texts, but by displaying an affinity for language.

After the success of Shekhinah, Wilner worked as an Associate Professor in Tokyo for Temple University from 1984-1986 and was awarded a literature grant from the Pennsylvania Council for the Arts in 1985. She became a Poet-in-Residence at the University of Chicago for the spring of 1987, and also at the University of Iowa for the fall of the same year. At the Warren Wilson College (Swannnanoa, NC), she became a faculty member of the MFA Program for Writers in 1989 and remains so today.

Her third poetry collection, Sarah's Choice, was published in 1989 and named after a paradoxical tale of the Old Testament; the story of Isaac and Abraham. In Wilner's version, God speaks to Sarah before Abraham, telling her to sacrifice her first-born son on the altar of faith. Sarah's reply is "a speech / the canon does not record."

"No," said Sarah to the Voice.
"I will not be chosen. Nor shall my son—
if I can help it. You have promised Abraham,
through this boy, a great nation. So either
this sacrifice is a sham, or else it is a sin.
Shame," she said, for such is the presumption
of mothers, "for thinking me a fool,
for asking such a thing. You must have known
I would choose Isaac. What use have I
for History—an arrow already bent when it is fired from the bow?"


In addition to rewriting the Bible, Wilner has no qualms about rewriting Sophocles and does so in the poem "Classical Proportions of the Heart," which tells the story of Oedipus from the perspective of the old shepherd who unwittingly helped to precipitate the tragedy by saving Oedipus as an infant. "Throughout Sarah's Choice," Grosholz says in another Hudson Review article, "Wilner reminds us of our precarious and enduring comforts: friendship, the power of refusal, the power of assent, and poetry itself."

Wilner achieved the Pennbook/Philadelphia Award for Literary Excellence in 1990 and then returned to the University of Chicago to be a Poet-in-Residence again for that spring. She became a MacArthur Foundation fellow for 1991-1996. During this time, she traveled to the University of Hawaii as a visiting writer (1993), published her fourth poetry collection, Otherwise (1993), and was awarded a Pushcart Prize for Poetry and the Edward Stanley Award for Poetry, Prairie Schooner (1996).

In Otherwise (1993), Wilner loosens the attachments of traditional figures from their historical ground and sets them free—to suggest how it might have been 'otherwise,' and might still be. "Otherwise is ambitious and patient, built on the spider's stratagem: the poet throws out a long tentative thread, then spins carefully outward until we see the new shape standing on air," said Carol Muske, writing for the The New York Times Book Review; David Slavit, writing for Seven Arts, said that "In a book of poems, one is happy to find half a dozen remarkable performances—poems worth rereading and even committing to memory. In Otherwise—which is splendid from the title on—it would be hard to find half a dozen which failed to equal Wilner's stratospheric standard."

Wilner worked as a Writer-in-Residence at Northwestern University in the fall of 1997, and in 1998 she published Reversing the Spell: New and Selected Poems, Precessional, and her scholarly translation of Medea, Euripides I.

The article "Signs of Hope" in The Women's Review of Books by Florence Howe examines Wilner's Reversing the Spell: New and Selected Poems. In this volume of poems, she has selected several verses from previous collections and written new ones to tell a story. Howe explains that "her story focuses on patterns of history and myth, and the light they cast on contemporary life. Her plot would 'reverse the spell' of hatred, greed, violence and fear....through stories with new plots as well as old, she will make palpable the dangers worldwide to planetary life." Howe also notes that in the 1990s, Wilner changed slightly in her poetic nature: "If they [Wilner's poems]...offer franker and grimmer warnings, they also deepen the signs of hope that punctuate the earlier volumes."

Precessional, a collection of Wilner's poems about various gods of Greek mythology appearing in end-of-the-twentieth-century guises, was published in 1998. The mythic world is reflected in the accompanying lithographs by artist Enid Mark and all of the poems, with one exception, had been written exclusively for this book. Precessional was a limited edition collection; only forty-five numbered copies were made, and it is no longer in print.

Wilner taught as a visiting professor at the University of Utah in the spring of 1999 and worked as a Poet-in-Residence at the University of Chicago for the third time in the spring of 2000. In 2000-2001 she was a Grace Hazard Conking Writer-in-Residence at the Smith College in Northampton, MA, won the John William Corrington Award for Literary Excellence (Centenary College of Louisiana) in 2000, and the Edward Stanley Award for Poetry, Prairie Schooner, for the second time in 2001. Northwestern University made her a Writer-in-Residence for a second time in 2002.

Nell Altizer's review in Prairie Schooner describes Wilner's 2004 poetry collection, The Girl with Bees in Her Hair, as containing "the most important poems of our time and that if we do not heed what this poet has to say about justice, civil liberties, foreign policy, the environment, [...] war, the slaughter of innocents, and of our nation's history of violence, madness, and mayhem [...] then we may well have reached the end of it."

Her 2010 collection, Tourist in Hell,attempts to absorb the shock of the wars and atrocities of the twentieth and early twenty-first centuries. According to Diane Scharper's Library Journal review, the collection "focuses on history, current events, literature, mythology, and Christianity. [Wilner] carefully fuses autobiographical details to a larger context, and one hears echoes of the Old Testament, Roman Catholic prayers, William Shakespeare, Arthur Rimbaud, and Gerard Manley Hopkins, among others."

Her poem, "Knowing the Enemy," was selected for publication by thePublic Poetry Project of the Pennsylvania Center for the book in 2010.

At the time of this writing, Eleanor Wilner is an Advisory Editor of Calyx, and her work appears in many anthologies of poetry, including Best Poems of 1976: Borestone Mountain Poetry Awards, The Best American Poetry (1990), and Four Contemporary Poets. She is also a contributor of poems, criticism, and reviews to literary journals and numerous periodicals, including Poetry, Ms., The New Republic, Epoch, Minnesota Review, and the Cortland Review (2012). Wilner lives in Philadelphia and has taught, most recently, at the University of Chicago, Northwestern, and Smith College. She is on the faculty of the MFA Program for Writers at Warren Wilson College and presented her lecture, "Getting Out of Your Own Way," to Warren Wilson writers attending the 2013 Winter Residency.