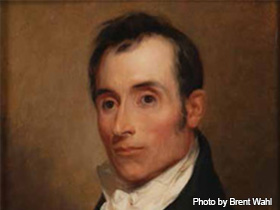 Alexander Wilson was born in a thriving Scottish town named Paisley. In 1794, Wilson left Scotland with his nephew aboard a ship to America, where they landed two months later. Wilson's primary residence was Philadelphia, Pennsylvania, from where nearly all of his excursions originated and ended. Wilson traversed many explored and previously unexplored territories, documenting America's native bird species. Wilson wrote and illustrated American Ornithology, which was the first book to document the native bird species of America.

Alexander Wilson was born to parents Alexander Wilson Sr. and Mary M'Nab in Paisley, Scotland. Wilson Sr. was a highly-respected, well-accomplished weaver at the time of his son's birth. As a young child, Wilson enjoyed activities such as fishing at the nearby Cart River and hunting in the surrounding fields for rabbits. He was recognized as a precocious child, and he was sent to the Paisley Grammar School. Coming from a very religious family, Alexander's mother had hoped he would choose to study for the ministry, but he soon became bored by his studies and gave it up. After Wilson's mother was diagnosed with tuberculosis, she quickly died, and Alexander Wilson decided that he would not return to school. Wilson took a job as a herd boy for a farm in a nearby village named Beith. Wilson had two key characteristics that were were apparent in his early years: his love for nature and his ability to be content in solitude.

Wilson decided to learn the techniques of weavers, and he became an apprentice to his brother in-law for a three year period. When Wilson completed his apprenticeship, he moved to the village of Lochwinnoch to work as a weaver. It was during this time that Wilson began to show his desire to write poetry, spending time in front of the loom writing poetry instead of weaving. Wilson was determined to see his poetry published, but he learned the costs that publishing entailed. Wilson spent a few weeks roaming Scottish villages in hopes of selling subscriptions to the book of poems that he wished to publish. Wilson quickly discovered that it was very difficult for an unrecognized poet to publish his own work successfully.

Wilson began writing poetry that challenged one of the higher members of the town and even included letters of blackmail. Wilson was brought to trial, and he was let off with a small fine. The court warned him not to publish the poem. Wilson was arrested many more times for similar types of poems, and he continued to receive fines for them. He was so far in debt that he began to feel trapped by the government.

In May 1794, Wilson decided that he and his nephew, William Duncan, would set sail for Philadelphia, Pennsylvania, aboard "The Swift." The ship landed at Newcastle on the Delaware on July 14, 1794, and Alexander and his nephew made their way up the Delaware River until they reached Philadelphia. Wilson gave up the loom, packed his peddlers pack with goods, and set off for New Jersey. Wilson kept a log of his sales along the way, but he kept a more thorough log with accounts of the nature and wildlife he saw along the way. When he returned to Philadelphia in 1796, Wilson found work at a school in Milestown, Pennsylvania, 20 miles from Philadelphia. Wilson gained respect from the community as a schoolmaster. He remained in Milestown, working at the same school, for the next few years. However, then he left without giving much explanation. Wilson took a similar schoolmaster position at a Gray's Ferry school, where he met William Bartram, son of John Bartram.

William Bartram was one of the earliest American ornithologists, and many believe that Bartmam's work sparked Wilson's interest in birds. Wilson decided that he would become an apprentice to Bartram, hoping to learn as much about his knowledge of ornithology as possible. Wilson became an American citizen on June 9, 1804. Wilson had grown so fond of Bartram's work that he dedicated his life to the study of birds in America. Wilson gained motivation from Bartram to travel the new continent and record as much about birds as he could, and he set foot on a journey that took him and two others on a round trip journey of about 1200 miles. Wilson's poem "The Foresters" describes the journey, the discovery of many previously unseen birds, and his initial thoughts when viewing Niagara Falls. When Wilson returned from his trip, he received a job offer from one of the leading publishing firms in America, which was run by William Bradford. Wilson took the assistant editor position, and he told Bradford his plans to write American Ornithology, a ten volume series on birds native to America. Wilson set out on a journey that proved to be equally as difficult as his last mission to sell subscriptions, but the few subscriptions that he did manage to sell were to people of high regard, such as President Thomas Jefferson.

The first volume of American Ornithology was published in 1808, and it was widely appreciated by those who viewed it. In 1808, Wilson departed on a five year journey, in which he traversed the states that are now Maryland, Virginia, North Carolina, South Carolina, and Georgia. On this journey, Wilson added roughly 250 subscribers to the previous few. One of the problems surrounding the American Ornithology's production was that the plates were all hand-colored. Despite the issue, the second volume was released in 1809. In the preface of the second volume, Wilson provided the viewers of American Ornithology a brief insight into why he undertook such a project: "...in ransacking our fields and forests, our sea shores, lakes, marshes and rivers; and in searching out and conversing with experienced and intelligent sportsmen and others on whose information he can venture to rely, he pledges himself, that no difficulty, fatigue or danger, shall deter him from endeavouring to collect information from every authentic source."

In 1810, Wilson departed on another mission that took him to Pittsburgh, Pennsylvania, and then south on the Ohio River to Louisville, Kentucky. In Louisville, Wilson met John James Audubon, who later published The Birds of America. Wilson continued to travel south until he reached New Orleans, Lousisian, where he boarded a ship headed back to Philadelphia. During this stay in Philadelphia, Wilson completed volumes three, four, and five, and began working on volume six. The sixth volume was published in the summer of 1812, and the seventh volume was published in the spring of 1813.