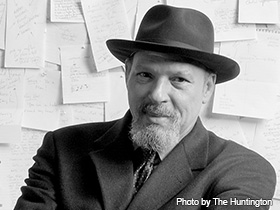 Born in poverty in the Hill district of Pittsburgh, August Wilson was one of the most accomplished African-American playwrights of this century and was one of only seven to win the Pulitzer Prize. He dedicated his career to documenting the 20th-century struggles of African-Americans, decade by decade, in a cycle of ten plays. He completed the cycle shortly before he died of liver cancer on October 2, 2005.

Born Frederick August Kittel on April 27, 1945, to Daisy Wilson-Kittel and Frederick Kittel, August Wilson's childhood was spent in poverty in the Hill district of Pittsburgh, where he shared a house with five siblings that had two rooms and no hot water. His mother supported the family as a cleaning lady while his father, a German baker, spent little time with them. When Wilson was a teenager, she divorced Frederick Kittel and married David Bedford, Wilson's stepfather, and the family moved to Hazelwood, Pittsburgh.

Wilson's mother had taught him to read when he was four-years-old, and he was a bright child who was eager to get his first library card a year later. However, when he encountered racism in the school system of Hazelwood when wrongly accused of plagiarizing a paper about Napoleon simply because his teacher could not fathom an African-American student creating such an excellent piece, Wilson dropped out of school at age 15. He began educating himself at the Carnegie Library in Pittsburgh, where he immersed himself in the works of African-American writers.

He was especially moved by the works of Romare Bearden, an artist whose painting, The Piano, later inspired Wilson's play The Piano Lesson. Wilson said of Bearden, "What I saw was black life presented on its own terms, on a grand and epic scale, with all its richness and fullness, in a language that was vibrant and which, made attendant to everyday life, ennobled it, affirmed its value, and exalted its presence."

By age 20, Wilson knew he wanted to be a writer. When his father died in 1965, Frederick August Kittel dropped his father's name and changed his name to August Wilson. He bought his first typewriter and moved into a boarding house on Bedford Avenue in Pittsburgh, where he began writing and submitting poetry for publication. In 1968, Wilson co-founded a theater company in the Pittsburgh Hill district where he grew up called Black Horizons on the Hill with his friend Rob Penny, a playwright and teacher. Wilson staged his first play, Recycling, in 1973.

In 1978, Wilson moved to St. Paul, Minnesota, where he took his first job as a paid writer adapting Native American stories as a scriptwriter for the Science Museum of Minnesota. While there, he also wrote his first play, Jitney (1982), a drama set in a Pittsburgh taxi station. He sent this play to the Playwright Center in Minneapolis and won a Jerome Fellowship, which led to the play's production. "[I] found myself sitting in a room with 16 playwrights," Wilson said of his fellowship, having initially been led to the script form through his museum job. "I remember looking around and thinking that since I was sitting there, I must be a playwright, which is absolutely critical to the work. It is important to claim it."

After gaining a foothold in the world of theatre, Wilson mapped out a distinct plan for his career: to document the 20th-century struggles of African-Americans, decade by decade, in a cycle of ten plays. His play, Fences (1986), about an illiterate, embittered garbage collector working in Pittsburgh in the 50s, won the Pulitzer Prize for drama, and the Tony Award for best play in 1987. His next play, Joe Turner's Come and Gone (1988), about an ex-con searching for his wife after ten years of imprisonment at the beginning of the previous century, received a Tony nomination in 1988.

"I just told him I would continue to explore the black experience, whether he thought it was exhausted or not," Wilson said of an interviewer who had implied it was time for Wilson to move on to another subject. "And then my goal was to prove that it was inexhaustible, that there was no idea that couldn't be contained by black life.

In 1990, The Piano Lesson, Wilson's play about siblings in a dispute over a treasured family heirloom during the Great Depression of the 1930s, won the Tony Award for Best Play and the Pulitzer Prize for drama. The play was adapted into a teleplay, filmed in Pittsburgh in 1994, and aired on CBS's "Hallmark Hall of Fame" in 1995.

Two Trains Running (1993), set in Pittsburgh in 1969, is about the people in a neighborhood diner that the city wants to purchase for an urban renewal project. It earned Wilson a Tony Award nomination for best play in 1992. In 1995, Wilson wrote Seven Guitars, a biography of blues guitarist Floyd Barton.

My greatest influence has been the blues," August Wilson said. "And that's a literary influence because I think the blues is the best literature that we as black Americans have. [...] Blues is the bedrock of everything I do. All the characters in my plays, their ideas and their attitudes, the stance that they adopt in the world, are all ideas and attitudes that are expressed in the blues. If all this were to disappear off the face of the earth and some people two million unique years from now would dig out this civilization and come across some blues records, working as anthropologists, they would be able to piece together who these people were, what they thought about, what their ideas and attitudes toward pleasure and pain were, all of that. All the components of culture.

Wilson won prestigious awards and made tremendous accomplishments throughout his career. He was the first African-American to have two plays running on Broadway at the same time and was one of only seven American playwrights to win two Pulitzer Prizes. He was named Pittsburgher of the year in 1990 by Pittsburgh Magazine, and in 1992 he received an honorary degree from Pittsburgh University. In 1999, the Pittsburgh Post-Gazette named Wilson the top Pittsburgh cultural power broker.

Along the way, he married Brenda Burton in 1969, and their daughter Sakina Ansari Wilson was born on January 22, 1970. Two years later, he and Brenda divorced. Wilson married Judy Oliver, a social worker, in 1981, and they subsequently divorced in 1990. His third marriage, to costume designer Constanza Romero in 1994, led to the birth of his second child, Azula Carmen Wilson, born August 27, 1997.

Before Wilson's passing, Jitney was revised for a professional premiere at the Pittsburgh Public Theatre, Wilson convened the Dartmouth conference on African-American Theatre that established the African Grove Institute of the Arts, and he was honored at the 100th anniversary of the Hill District Branch Library.

His final play in the 10-part Pittsburgh Cycle was Radio Golf, set in the 1990s, and it premiered in 2005. Wilson died of liver cancer six months later on October 2, 2005, in Seattle, Washington.

"All you need in the world is love and laughter," Wilson's character Bynum says in Joe Turner's Come and Gone. "That's all anybody needs. To have love in one hand and laughter in the other."