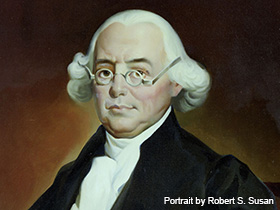 A signer of both the Declaration of Independence and the Constitution, James Wilson was a well-respected jurist in the early years of the Republic.

Born in Scotland in 1742, Wilson attended the Universities of St. Andrews, Glasgow, and Edinburgh without attaining a degree. In 1766, he emigrated to the United States, and through various connections, he acquired a job teaching at the College of Philadelphia along with an honorary Master of Arts degree. Wilson began his career in law, setting up a practice in Reading, Pennsylvania, achieving much success. He became a representative of Carlisle and wrote a pamphlet titled "Considerations on the Nature and Extent of the Legislative Authority of the British Parliament." This work was highly commended by many members of the Continental Congress, which Wilson was elected to in 1775. A signer of both the Declaration of Independence and the United States Constitution, Wilson continued his work in the government as a Congressman. In 1789, he was appointed Associate Justice of the Supreme Court. Wilson died in North Carolina at the age of 56.

James Wilson was born in Carskerdo, Scotland in 1742. He was the eldest child of William Wilson, a respected farmer of the area. His parents intended for him to go into the Presbyterian ministry, and Wilson enrolled in St. Mary's College divinity school. Due to financial difficulties resulting from the death of his father Wilson withdrew from the divinity school. Between the years 1757 and 1765, James Wilson attended the Universities of St. Andrew's, Glasgow, and Edinburgh without earning a degree. In 1765, Wilson immigrated to the colonies, landing in New York. In 1766, he moved to Philadelphia, Pennsylvania, and he began tutoring Latin at the College of Philadelphia. Wilson petitioned for and was awarded an honorary Masters of Arts from the College of Philadelphia.

Wilson married twice. Wilson first married Rachel Bird on November 5, 1771. The couple had six children. Rachel died in 1786. Seven years after her death, Wilson married Hannah Gray. They had one child who died in infancy.

Shortly after beginning his career in education Wilson went back to school, studying law at the office of John Dickinson, a leading figure in the early days of the Republic. He was admitted to the bar in November 1767. In 1768, Wilson set up a law practice in Reading, Pennsylvania, specializing in land law. Shortly after, he moved his practice to Carlisle, a more Scotts-Irish area. Wilson had great success practicing law in Cumberland County and its neighboring counties. While practicing law, Wilson also lectured English at the College of Philadelphia and also dabbled in land speculation in New York and Pennsylvania.

In 1774, Wilson began his career in Revolutionary politics. He attended the Provincial Convention of Pennsylvania representing Carlisle. Due to his well established practice and reputation, Wilson was named a member of the Cumberland County Committee of Correspondence. In the same year, Wilson published a pamphlet titled, "Considerations on the Nature and Extent of the Legislative Authority of the British Parliament." Wilson argues that Parliament had no authority to pass laws for the colonies because the colonies had no representation in Parliament. It preached his political views that all power derived from the people.

Wilson's pamphlet was commended by many members of the Continental Congress. He was elected to the Continental Congress and serve on it from 1775 to 1777, 1783, and from 1785 to 1786. He was a powerful orator and delivered his speeches passionately. Furthermore, Wilson used logical argumentation demanding separation from Britain. Though Wilson felt and argued strongly for separation from Britain, he refused to sign in support of it because the constituency he represented, Cumberland County, Pennsylvania, was not in support of separation. Wilson, along with others from Pennsylvania, requested a three week delay to gain the support of his constituency. After this, Wilson finally signed the Declaration of Independence.

Wilson continued his work in politics and law after the convention. He adamantly opposed Pennsylvania's democratic Constitution of 1776, which led to his removal from Congress in 1777. Wilson's credibility came under fire when he began representing accused Tories (British loyalists). His credibility was also questioned due to his involvement in many land speculation schemes. In 1778, Wilson moved his family to Philadelphia. Wilson was accused of engrossing, goods in a time of shortage, and a riot broke out resulting in a mob attacking his home in 1779.

Also, in 1779, Wilson was appointed by France to be the United States advocate general for maritime and commercial enterprises. Wilson was appointed a trustee of the newly chartered Bank of North America in 1781. In 1782, Wilson was reelected to Congress and served at the Confederation Congress. Wilson defended Congress' ability to charter a bank, and it had personal significance to him. Wilson routinely borrowed money from the bank to invest in land even before older investments turned a profit, which caused Wilson to accumulate quite a large debt.

Due to the political power of the conservatives, Wilson was sent to the Constitutional Convention of 1787. Wilson is often described as the second most influential man at the convention, with only James Madison surpassing him. Wilson continued his support of checks and balances, and he stressed the importance of judicial review in the government. Not only was Wilson involved in Constitution writing at the national level, but he was also the main author of Pennsylvania's Constitution, which was ratified in 1790.

In 1789, Wilson became the first professor of law at the College of Philadelphia. The majority of his written works came from his lectures from 1789 to 1791. Through his work in law, Wilson saw the power the Chief Justice of the Supreme Court possessed. Wilson petitioned President Washington directly for the position, but he was awarded Associate Justice instead. The first Chief Justice position was awarded to John Jay. Wilson had little fame while serving on the bench. One can see his support of judicial review and his support of implied powers granted by the Constitution through the work he accomplished in his position.

Wilson consolidated the debt he owed to the Bank of North America in 1794, and he tried to elude his collectors. Wilson was imprisoned twice for his debt; first in New Jersey in 1797 and again in North Carolina in 1789. Wilson's gambling and failed land speculation ventures incurred such debt that his reputation was severely tarnished. Wilson died while staying with a friend on August 28, 1798 in Edenton, North Carolina. His body was reinterred at Christ Churchyard in Philadelphia in 1906.