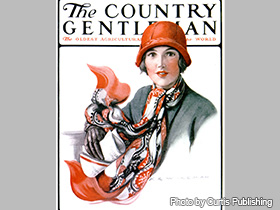 Katharine Wireman's illustration career spanned over 50 years and included publication in nationally recognized magazines and advertising campaigns, children's books, and other widely distributed printed materials. With unwavering success throughout the years, she became the sole financial supporter of her family, notable for a woman of her time. A mother, wife, and active community member, Wireman's accomplishments and work continue to be admired today. After devoting over 15 of her final years to volunteerism, Wireman died at age 87 in April of 1966.

Born the second child to Achsah Willis Nevins Richardson and Elliott Richardson on October 30, 1878, Katharine Nevins Richardson was raised a Quaker in Philadelphia, Pennsylvania, and would later become Katharine Wireman. Wireman had four siblings, Hannah, Elliott, Jr., James, and Frances. Her father was a doctor of obstetrics and gynecology who built a private practice and also taught at the University of Pennsylvania School of Medicine; however, he died of typhoid fever on May 9, 1887, at the age of 44.

The eight-year-old Wireman mourned the loss of her father, whom she had enjoyed accompanying on carriage rides to hospital visits and sick calls. Unfortunately, she lost her mother only two years later to tuberculosis on December 20, 1889. Achsah Richardson was only 40 years old. This left Wireman and her four siblings to their father's four unmarried sisters who lived in Chestnut Glen on a 32-acre piece of family land that included a large stone house, as well as additional houses and sheds.

In the care of her four aunts, Ruth Anna, Hannah, Sallie, and Maria, Wireman was brought up in an intellectually stimulating environment where she and her siblings were cared for, provided for, and exposed to an ebb of culture and refinement, while their grandparents maintained a lively social environment as leading members of the religious Byberry Friends Meeting.

In 1894, Wireman, along with her sister Hannah, graduated from the private Quaker high school, Abington Friends Boarding School. Ranked third in her class of 18, Wireman went on to continue as a boarding student at George School and graduated from there in 1897. That fall, she entered Drexel University in Philadelphia to study illustration, an aspiration she'd had since the age of seven.

Wireman's family encouraged her pursuit of illustration, especially her Aunt Sallie, who was a successful artist herself and arranged for Wireman to study with famous artist and illustrator, Howard Pyle. Throughout her attendance at Drexel, Wireman rented rooms nearby until her classmate and friend, Eugenie (Jenny) Wireman invited her to live with her family. Jenny's brother, Henry, visited the house often, and Wireman would later become his wife on June 20, 1905.

Within her last year of studying with Pyle at Drexel in 1900, Wireman submitted a cover design to The Saturday Evening Post and earned her first paycheck from illustrating when it was accepted. By the time the cover appeared on September 29, 1906, Wireman had had another illustration published on the cover of Ladies' Home Journal in January 1905, which featured the first baby to ever appear on the cover of a magazine. Wireman's post-graduation career as a freelance artist was flourishing, as she sold illustrations to the Philadelphia Record and the Philadelphia Press newspapers, Curtis Publishing, and Procter & Gamble for their Ivory Soap ads.

Once married, Wireman moved with her husband to a small town near Covington, Virginia, where he had invested in a lumber company. Wireman's illustrating career began to take center-stage in magazine and ad publishing, in a time before photography was the standard, and included illustrating for Youth's Companion, Good Housekeeping, the Cream of Wheat company, children's books, The People's Home Journal, Collier's, and The Bride. Soon she was the main financial supporter of her family.

In Sunshine and Shadows: A Biography of Katharine Richardson Wireman (2000), her daughter Henrietta Wireman Shuttleworth said of her mother: "With all her success and national reputation, she remained an unassuming, down-to-earth person interested in everything and everyone around her." Shuttleworth went on to describe several family crises that her mother had managed while still maintaining her artistic career, including her husband nearly dying of a throat infection and two of her children threatened by whooping cough.

Wireman also "used her experiences for inspiration and those around her as models," Shuttleworth wrote. "She took black-and-white photographs of her husband and daughters in action and often asked people to pose for a short time while she sketched them." Wireman and her family moved to Philadelphia in 1913 near her and her husband's family members. They bought a house in Germantown where Wireman lived "for the rest of her life, caring for it as one of her children." She continued to illustrate for national magazines and advertising, including Crisco, The Saturday Evening Post, The Country Gentleman, The Designer, Modern Priscilla, Woman's Home Companion, and McCall's.

In 1920, Wireman became the mother of her third child, Henrietta Druck Wireman Shuttleworth, at age 42. Shuttleworth fondly recalled Wireman's as a mother: "Mama was always where I could find her — in her studio on the third floor of the house, where she worked almost every day from early morning until evening dinnertime. ... [She] never minded having me in the studio, no matter how busy she was. She would listen to and solve my childish problems, or amuse me with a verse, or give me her leftover oil paints to squash between folder paper to make beautiful butterflies."

In the following years, and through the 30s and 40s, Wireman illustrated for national magazines, including The American Woman, The Farmer's Wife, People's Popular Monthly, and Child Life — as well as for several religious publications in Philadelphia, New York, Cincinnati, Nashville, and Providence. Wireman's steady success eventually made her the sole financial provider for her family, while her husband Henry occupied his time with the Germantown Cricket Club, tennis, investing, and socializing. Sadly, he died of a heart attack on September 25, 1931, at the age of 54.

Once Wireman turned 70 in 1948, she began devoting her time to volunteer work, including her participation in Green Street Friends Meeting and the Germantown Historical Society. She edited the Germantown Crier on a volunteer basis from 1950-1961 — beginning as an Art Editor, becoming Editor in Chief, and ultimately earning the lauded title of Editor Emeritus upon retirement.

Wireman died on April 23, 1966, at age 87. She was buried in the Wireman Family plot located in Philadelphia's Laurel Hill Cemetery.

"As a child she wanted to be an artist," Shuttleworth mused. "[A]nd she accomplished this in great style. Along the way, she was a loving mother and a support for all her family. Her life was one of great optimism, service, and accomplishment."

The exhibit "So Beautifully Illustrated" of Katharine Wireman's work recently took place at the Delaware Art Museum in 2013. In November 2013, one of her oil painting was appraised for the Antiques Roadshow at a retail market value of $3,000-$5,000.