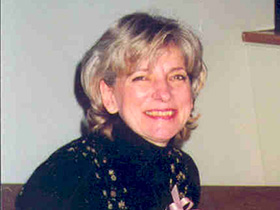 Born in Rochester, New York, Susan Wojciechowski attended Nazareth College to become a public school teacher, librarian, and a freelance writer. She began writing books for children and teenagers in 1987, with several of her works following the young girl Beany, inspired by Wojciechowski's daughter.

Susan Wojciechowski, daughter of Michael and Regina (Stenclik) Osinski, was born in Rochester, New York. At an early age, she aspired to become a teacher, attending Nazareth College and earning her BA from there. In November, 1966, she married Paul Wojciechowski. Together they had three children—Joel, Christian, and Mary. She taught elementary school and served as a freelance writer since 1981, as well as a school librarian since 1986, in Rochester. After leaving these jobs, Wojciechowski began writing fiction ever since a neighbor published a story. She earned $50 for her first submission to a magazine.

With her first three books, Patty Dillman is the main character, a reflection of the author herself, just as Patty's daughter Beany represents Susan Wojciechowski's daughter Mary. InThe Best Halloween of All (1992), updated in 1998, a child tailors his own Halloween costume after years of wearing embarrassing outfits made by his parents. Carolyn Phelan ofThe BooklistdescribesThe Best Halloween of Allas "A fresh version of a holiday read-aloud treat."

Beany, in Beany and the Dreaded Wedding (2000), meticulously prepares for being the flower girl at cousin's wedding. Kirkus says that "Wojciechowski writing rings true. Beany's concerns, ruminations, and antics are grounded in reality, revealing an innate understanding of young grade-school readers, who can readily relate to Beany's keen yet comical observations...Fans and newcomers alike will be rooting for Wojciechowsky's intrepid heroine as she tackles her anxieties with grit and fortitude." Deborah Stevenson ofThe Bulletin of the Center for Children's Booksdescribes Beany as "a sympathetic heroine, and Wojciechowski draws her simply and clearly without reducing her to a cutout."

Wojciechowski's latest work, Beany and the Meany (2005), has Beany partnering with the bully class Kevin for a science fair project, yet the two increasingly become friendly to one another. Martha P. Parravano of The Horn Book Magazine claims "Beany is a believable, sympathetic character, and this entry in the series is (like its predecessors) accessible, funny, and true-to-life. Wojciechowski incorporates realities of modern childhood-such as parentless after-school arrangements...and pop psychology...while still telling a timeless story of the transformation from former bully to friend." According to Timnah Card of Bulletin of the Center for Children's Books, "sound characterization and realistic plotting lift this above the general run of early chapter books; Beany's relationships with her family, friends, and schoolmates are convincingly imagined, as is her practical, simple, and clever science fair project."

A leprechaun helps young Fiona and others to decorate their town in A Fine St. Patrick's Day (2004) so as to win a prize in a competition. Elizabeth Bush of Bulletin of the Center for Children's Books critiques A Fine St. Patrick's Day: "The telling isn't quite as tight as it could be, and Wojciechowski's 'sure and begorras' wear a bit thin...Plot and tone may be St. Pat's at its most predictable, but readers in search of a fresh look for the holiday could give it a go." Diane Rowback ofPublishers Weekly adds, "The author's smooth storytelling and steady pace create a vivid setting, and her tale delivers a solid message," and Kitty Flynn ofThe Horn Book Magazine says "Wojciechowski tells a fine story that reads well aloud."

Wojciechowski has been a member of the Society of Children's Book Writers and Illustrators and the Rochester Area Children's Authors and Illustrators. Her numerous awards include: for And the Other, Gold, Patty Dillman of Hot Dog Fame, and Promises to Keep, three citations from both the Best Books of the Year selection of the Child Study Association, and the Book for the Teen Age selection from the New York Public Library; for The Christmas Miracle of Jonathan Toomey, a Notable Children's Books selection from the American Library Association, a Teachers' Choice Award from the International Reading Association, a Parent's Choice Honor Book award, a Christopher Medal, and the Pennsylvania Library Association's Carolyn W. Field Medal; for Beany (Not Beanhead) and the Magic Crystal, a Parent's Choice Gold Award, and Best Books of the Year list from the Child Study Book Committee at Bank Street College. Wojciechowski's books have also been named to several state recommended reading lists.

Concerning her writing, she told Contemporary Authors Online that, "As a mother, librarian, and former teacher as well as a children's author, I have always felt the need to touch the minds of children. Through my writing, I try to reach children in a special way, by portraying them as real people—warts and all—and showing them that they are more or less alike, despite their differences."

At the time of this writing, Susan Wojciechowski lives in York, Pennsylvania.