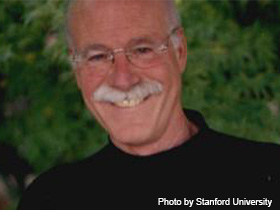 Novelist and memoirist, Tobias Wolff attended the Hill School in Pottstown. He also taught at the University of Pennsylvania.

A memoirist, novelist, and short story writer, Tobias Wolff has forged a career out of self invention and reinvention. Wolff explored his difficult childhood in a memoir, This Boy's Life (1989), that greatly influenced the genre. In the memoir, Wolff describes his years at the Hill School in Pottstown, Pennsylvania. Wolff has also helped develop young writing talent as a Professor of Creative Writing, having taught at various colleges and universities, including Temple, in Philadelphia, and Stanford.

Rosemary Loftus Wolff, a waitress and secretary, gave birth to Tobias Wolff on June 19, 1945, in Birmingham, Alabama. His father, Arthur Samuels Wolff, worked as an aeronautical engineer at the time of his birth and later beame an executive by faking the necessary credentials. When Wolff was four years old, his parents divorced. His older brother, Geoffrey, moved with his father to the state of Washington, and Tobias moved with his mother to Florida. Throughout the years they spent together in the southeast, Wolff observed his mother in a series of abusive relationships, which he later catalogued in This Boy's Life (1989). In 1955, Wolff and his mother moved to Utah. They moved together one last time when one of his mother's former lovers followed them out west.

In Seattle, Washington, Wolff's mother met and was briefly married to a widowed mechanic. Wolff reacted to his new home life by skipping school and becoming silent and withdrawn. However, he soon re-established contact with his brother, who was attending Princeton University. Geoffrey became a role model for Wolff and inspired his younger brother to take writing seriously. Wolff decided to recast himself as an intellectual and began applying to boarding schools on the east coast. By forging letters of recommendation and faking his school records, he gained admission to the Hill School of Pottstown, Pennsylvania. In his senior year, Wolff was expelled for repeated failure.

At age 19, after drifting from job to job, Wolff joined the army, trained in the Special Forces, and served in Vietnam as an advisor to the South Vietnamese military. After a year he was discharged and, upset by the anti-war movement in the states, moved to England to attend Oxford, where he graduated with high honors in 1972. While in his mid-twenties, Wolff began his professional writing career. After working as a Washington Post reporter, an impressive body of unpublished short fiction won him the Wallace Stegner Fellowship in Creative Writing at Stanford University.

Wolff's first published story, "Smokers," appeared in the Atlantic Monthly in 1976. Many well-received short stories appeared in journals for the next few years. In 1981, Ecco Press in New York published Wolff's first book, In the Garden of the North American Martyrs. This collection of short stories won the St. Lawrence Award for fiction in 1982. Two years later, Wolff released the novella The Barracks Thief (1984). The short novel draws from Wolff's experiences in the army and tells the story of three young soldiers trying to prove their masculinity; however, their posing is eventually undermined by a series of thefts and betrayals. The Barracks Thief received great praise from critics and also won the the PEN/Faulkner literary award. Wolff continued writing fiction, releasing another collection of short stories, Back in the World (1985), before beginning a successful side career as an editor by assembling an anthology of Chekhov's work called A Doctor's Visit: The Short Stories of Anton Chekhov (1987). Wolff then completed his most famous and best-regarded work, a memoir about his childhood and self-invention called This Boy's Life.

This Boy's Life relates the story of Wolff's nomadic childhood and teen years, detailing the abuse he and his mother received from her boyfriends, his drift away from family and school, and his dramatic reinvention as a writer and intellectual. Critics have suggested that parts of the memoir may have been fictionalized. However, Wolff and others contend that the need for good story takes precedence over the need for absolute factual truth. Despite these charges, This Boy's Life earned Wolff another major literary prize: the Whiting Writers' Award.

After focusing on short stories for several years, Wolff published a follow-up memoir, In Pharaoh's Army (1994), that detailed his experiences in Vietnam. The Collected Work of Tobias Wolff (1997) anthologized some of the author's best-known short fiction. Wolff has edited a number of short story collections, including The Vintage Book of Contemporary American Stories (1994), Best American Short Stories (1994), and Best New American Voices (2000). His 2003 novel Old School is loosely based on his time at the Hill School. Wolff has also published Our Story Begins: New and Selected Stories (2008), a collection of ten new and twenty-one old stories, and Awake (2008), a short story.

A deluxe edition of In the Garden of the North American Martyrs was published in 2015 as part of Ecco — HarperCollin's "Art of the Story" book series.

At the time of this writing, Wolffserves as editor of American Lives, a series of memoirs from University of Nebraska Press. He has taught writing at universities across the country, including Temple, in Philadelphia, and is now the Priscilla B. Woods Professor in the Humanities at Stanford, where he lives with his wife Catherine.