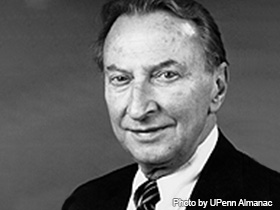 Marvin E. Wolfgang, native of Millersburg, wrotePatterns in Criminal Culture(1958) which redefined the study of criminology, but it is Delinquency in Birth Cohort (1972) that is considered his greatest achievement.

Marvin E. Wolfgang was born in Millersburg, Pennsylvania in 1924. After earning his doctoratefrom the University of Pennsylvania, Wolfgang remained at the University as a professor for an additional 45 years. He went on to write numerous books and articles focusing on homicide, delinquency, and violence. His first work, Patterns in Criminal Homicide (1958), won him the Fulbright and Guggenheim fellowships and allowed him to travel to Europe. His most famous work, though, was his 1972 Delinquency in a Birth Cohort. After his death in 1998, Marvin Wolfgang is still considered one of the most influential criminologists of all time.

Marvin Eugene Wolfgang was born into a Pennsylvania Dutch family in Millersburg, Pennsylvania on November 14, 1924. His mother, Pauline (Sweigard) Wolfgang, died shortly after his birth and Wolfgang was raised by his loving grandparents. Constantly encouraged to do well in school, Marvin excelled in his studies. After being accepted to Pennsylvania State University, Marvin Wolfgang became the first person in his family to attend college. However, his first college experience would be short lived and Wolfgang soon found himself on the other side of the world.

In 1957, Marvin Wolfgang married Lenora Poden, a professor of French at Lehigh University. The couple later had two children, Karen and Nina. 1957 was also the year Marvin began to write about homicide, delinquency, and violence and this was emphasized in his first work, Patterns in Criminal Homicide (1958). The book became the first analysis taken of comprehensive data, focusing particularly on 588 homicides committed in Philadelphia between January 1, 1948 and December 31, 1952. The data undermined the belief that most homicides are committed by strangers and showed Americans that most victims of homicides provoke the argument. He was awarded the Fulbright and Guggenheim Fellowships for his work and was able to travel to Italy once again. While in Italy, Wolfgang began studying the Renaissance period as it related to crime and punishment. He later concluded, in the 1990 article "Crime and Punishment in Renaissance Florence," that crime methods used by criminals and the idea of prison as punishment developed in Florence, Italy.

Wolfgang continued studying and traveling throughout Europe, stressing the importance of international connections related to research. He visited the University of Cambridge in England, he taught at the Hebrew University in Israel, and gave lectures in Paris, Muenster, Warsaw, Shanghai, Tokyo, and Ibadan. His busy schedule did not interfere with his writing, though, and Marvin continued to write and record the information he had come across during his travels. In 1964, he completed The Measurement of Delinquency, the first effort to take into account the true impact of crime on society. The book was Wolfgang's "index" of delinquency that showed the seriousness of delinquent acts and cultural differences in the way populations look at crime. 3 years later, he completed the phenomenal work The Subculture of Violence: Towards and Integrated Theory in Criminology (1967)in which he focused on high rates of violence among blacks being disproportionate due to the influence of a black subculture.

Marvin continued to write over 30 books and 150 articles throughout his life, but his most famous work, Delinquency in a Birth Cohort, came in 1972. This book marked the beginning of large-scale longitudinal studies of crime and delinquency. It was a study of over ten thousand boys born in Philadelphia in 1945. As stated in the book, the purpose was "to determine which members of the cohort had official contacts with the police, to compare delinquents with nondelinquents, and to trace the volume, frequency and character of delinquent careers up to age 18." The recorded data found that out of 9,945 boys, 3, 475 had at least one recorded police incident. Other statistics showed that offender rates increase gradually from ages 7 to 11, increase rapidly from 11 to 16, and decline at age 17. From the study, Wolfgang and co-authors Robert M. Figlio and Thornsten Sellin were able to conclude that a small number of offenders account for most of the offenses committed. They were also able to conclude that "the juvenile justice system has been able to screen the hard core offenders fairly well, but it has been unable to restrain, discourage, or cure delinquency."

After the success of Delinquency in a Birth Cohort, Wolfgang went on to win numerous awards including the Hans Von Hentig Award from the World Society of Victimology in 1988, the Edwin Sutherland Award from the American Society of Criminology in 1989, the Beccaria Gold Medal from the German, Austrian, and Swiss Society of Criminology in 1997, and in 1993, the Wolfgang Criminology Award was established in his name. Wolfgang spent the later years of his life showing his oppositions towards issues such as the death penalty and the use of a gun against a perpetrator in articles such as "We Do Not Deserve to Kill" and "A Tribute to a View I Have Opposed."

His career was cut short due to pancreatic cancer, though, and Marvin E. Wolfgang died on April 17, 1998. His impact on the field of criminology lives on through his works and the people fortunate enough to cross his path in life and, as stated by the British Journal of Criminology, Wolfgang remains "the most influential criminologist in the English-speaking world."