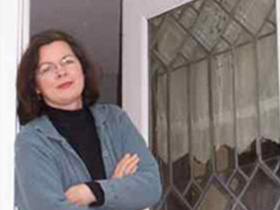 A writer of comedic and historical books for children, Elvira Woodruff lives in Northampton County.

Elvira Woodruff was born on June 19, 1951, in Somerville, New Jersey. Before becoming a successful children's book author at the age of 35, she held a variety of jobs, from janitor to ice cream truck driver. Her first published book, Awfully Short for the Fourth Grade (1989), was the take-off point for her continuing success in writing. She often includes elements of fantasy and history in her books. Additionally, she speaks to children at elementary schools about creative writing.

Elvira Pirozzi was born on June 19, 1951, in Somerville, New Jersey, to parents John and Francis Pirozzi. Luckily for the future children's book author, both her father (a truck driver) and mother (a nurse) understood and supported the haphazard path her life took to get her to where she is today.

After graduating high school, Pirozzi was uncertain about her future, yet decided to go to college. She first enrolled in Adelphi University, located in Garden City, New York, and majored in English literature. The next year, she transferred to Boston University, again majored in English literature, and again dropped out after a year. Deciding that she was "too restless to sit in a classroom any longer," Pirozzi then returned home to New Jersey, married her high school sweetheart (thus becoming Elvira Woodruff), and took a job as a janitor in an office building.

For the next 15 years, Woodruff would hold a hodgepodge of jobs, including gardener, receptionist, ice cream truck driver, window-dresser, store owner, baker, and finally, storyteller in a library, a job that reminded Woodruff of her love for books and writing, pursuits she left behind in college. Motivated by her recent divorce, which left her needing to make more money, Woodruff decided to take a risk and tried to get published.

Receiving guidance from her cousin, children's book author and illustrator Frank Asch, it didn't take long for Woodruff to find success: selling her first manuscript to major publisher Scholastic. However, that story, Mrs. McClosky's Monkeys (1991), was not published until a few years later, after several other Woodruff books achieved popularity. Instead, she was first published by Holiday House in 1989, with Awfully Short for the Fourth Grade (1989). Illustrated by Will Hillenbrand, the book is about a fourth-grade boy named Noah, who wins a packet of "magic dust" from a toy machine. To Noah's surprise, the magic dust works, shrinking him to the same stature as his favorite pocket-sized action figures. Before returning to his normal size, Noah and his toy comrades go through a series of perilous yet enlightening and ultimately harmless adventures. Kirkus Reviews said "Woodruff wins some chuckles with her humorous depiction of grade-school subcultures... and her topic will be dear to the heart of any child who collects little plastic creatures." Elaine Fort Weischedel said in School Library Journal that Woodruff's book "is pleasant fare and a promising debut."

Woodruff's next book, Tubtime (1990), is aimed at the younger age group of four-to-eight-year-olds. The story describes a bath taken by three young sisters in which the soap bubbles become magically inhabited by animals, compelling Booklist reviewer Ilene Cooper to comment that "bath time has never been more fun," and that the book "bubbles over with good cheer." The fantasy element it shares with Awfully Short is an ingredient continually found in other Woodruff books as well.

Given confidence by the success of her first two books, Woodruff decided that she had found a career. For the next few years she went on to publish three or more books a year, and soon began to incorporate one of her other favorite subjects: history. "I don't know of a greater pleasure than researching a subject you're passionate about," says Woodruff. She began featuring historical subjects in her books with George Washington's Socks, about a brother and sister who are transported back in time to the American Revolution. The author's readers also get to meet Leonardo da Vinci, in The Disappearing Bike Shop (1992), and Napoleon Bonaparte, in Dear Napoleon, I Know You're Dead, But-- (1992), the latter illustrated by Woodruff's sons, Noah and Jess.

Woodruff's history-based books do not always have a prominent historical figure, however. In The Orphan of Ellis Island (1997), Woodruff researched immigration in the early 1900s, to tell the tale of a fifth-grader who is transported back in time to join some young boys on their voyage to America. She also explores the epistolary format with a two-part series about brothers Levi and Austin. In Dear Levi: Letters from the Overland Trail (1994), Austin writes to his brother back in Pennsylvania about his journey to Oregon during the 1800s pioneer movement, in a book Elizabeth Bush of the Bulletin of the Center for Children's Books says is "especially valued as a classroom readaloud." And in Dear Austin: Letters from the Underground Railway (1998), described by Janet Gillen in School Library Journal as "carefully researched and vividly imagined," Levi responds, relating his adventures helping slaves to escape via the Underground Railroad.

Once she gained national popularity, Woodruff also began speaking at elementary schools, infusing humor and advice into talks about creative writing. "It's my aim when visiting a school to help all of the students recognize just how empowering communicating with words can be," Woodruff explains on her website. "I tell them I don't expect them all to grow up to be published authors...But I do hope they'll all come to feel comfortable with language and to use writing to express themselves, whether in their journals, essays, book reports, emails, or in something as simple as a birthday wish written to someone they love."

At the time of this writing, Woodruff lives in Allentown, Pennsylvania, and enjoys her now steady career as an author and public speaker. She has numerous awards to back up her writing, including the Pennsylvania Library Association's Carolyn W. Field Award in 2004 for The Ravenmaster's Secret (2003), and nominations for awards such as Missouri's Mark Twain Book Award, the Grand Canyon Reader Award, and the Rebecca Caudill Young Readers' Award. "I'm grateful my life didn't come with a map," she says. "I've been only too happy to map out the adventure myself."