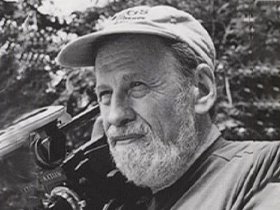 Richard Wormser was born in 1933 in New York, New York. He expressed early difficulty with writing but a large appetite for learning and reading. While he did attend primary school and prep school, he showed little interest in academia until his junior year of college, when his sociology professor awakened his interest in education. He spent the summer after his junior year wandering around the country, and a few years later he was selected to complete his Ph. D. in Paris, France. After returning from Paris, he received his first writing job at the Shamokin Citizen, a small town newspaper in Pennsylvania, where he wrote several feature articles about local miners. This job led Wormser to create documentaries about those he felt were largely ignored by larger society, and he went on to win the Edgar Allan Poe Award in 1973 for his first book The Invader, make over forty documentaries, and author more than fifteen books.

Born in 1933 in New York, New York, Richard Wormser's early writing experiences were agonizing at best. In his autobiography in the Something About The Author Series, he states "I am in second grade? am painfully learning how to write the letters of the alphabet the old-fashioned way?nk is all over the page, my hands, my arms, my shirt, my face. My "a's" look like "o's," "p's" like "t's"? think to myself, writing is beyond me. I will never learn how to write." He claims to still have difficulty writing, as he can never seem to find the word that expresses exactly what he wants to convey. While his early writing experiences were unimpressive, he expressed a voracious appetite for reading, especially in his prep school days when constant mockery from other students drove to read for cathartic reasons. He also seemed to show little interest in academics at young age; he claims that in junior high he would skip school to go watch Yankees games, as Babe Ruth lived only two blocks away.

Following his stint in prep school, he attended college where his sociology professor awakened his passion for learning. His Bible became Jack Kerouac's On the Road, which inspired him to go west for a summer. During his travels he met many different people from all walks of life and landed in Denver, Colorado, where one of the many hoboes he transports recommended he get a job as a logger. He said in his autobiographical sketch that his time as a logger was "one of the best jobs [he] ever had in his life." After college, he was accepted as a Ph. D. candidate at the Sorbonne in Paris but later dropped out claiming that he liked Paris to much to exercise the discipline required of a student. Toward the end of his stay in Paris, a revolution broke out over the French occupation of Algeria and Charles de Gaulle took over the country. Shortly thereafter, he decided to go home to New York.

After returning home, Richard received a call from a former college professor who asked him to come write for a small-town Pennsylvania newspaper called the Shamokin Citizen. Though he had little writing experience, he found his niche in feature writing and took an interest in exploring the local mining culture. His features on the lives of the miners and the mining industry increased sales for the newspaper and made him more prolific as a writer.

After being assigned to work with mentally disabled children, he decided he could not do justice to the children's stories without making a film documentary about them and he applied this philosophy to many of the groups of people he worked with. A pharmaceutical company called Smith, Kline, and French agreed to finance his first film, which went on to win numerous accolades. The film was called Pinkerton: America's First Private Eye, which was a biographical account of the life of abolitionist Allen Pinkerton, the most prominent private investigator of the nineteenth century and founder of the Pinkerton Agency. The book version of the film gained very favorable reviews: In the School Library Journal, Jacqueline Elsner described Wormser's debut book?s an account "told with exciting pacing and engrossing anecdotes." Pat Costello wrote for Voice of Youth Advocates that "history comes alive through the author's efforts..." In the way of writing ventures, the Mystery Writers of America bestowed Wormser the Edgar Allan Poe Award for Best Original Paperback in 1973 for his novel, The Invader.

In one of his most recent nonfiction works, The Rise and Fall of Jim Crow: The African-American Struggle Against Discrimination, 1865-1954, he described the state of affairs in Jim Crow America from the Civil War through the Civil Rights Movement. He went beyond a simple chronological retelling of the story, but rather he illuminated the heightened emotional climate of the period by citing very specific incidents and using quotations from those involved in addition to using descriptive narration. For example, in describing the campaign for governor of Georgia in 1906, he quoted candidate Hoke Smith saying, "We can handle [Blacks] as we did in Wilmington, where the woods were black with their hanging carcasses," and his supporter Tom Watson saying "The Negro has no comprehension of virtue, honesty, gratitude, truth and principle. It is necessary to lynch him occasionally?o keep him from blaspheming the almighty by his conduct on account of his color and smell."

His writing style is one that draws the reader into the story by using dramatic introductory sentences to capture the reader's attention. In his very first sentence of the first chapter of The Rise and Fall of Jim Crow, he writes:

At 4:30 A.M., on the morning of April 12, 1861, Edward Ruffin, a flinty, irascible old man from Virginia who passionately hated the North and who for twenty years had been haranguing the South to secede from the United States, received a singular honor form the Confederate Army: He fired the first shot of the Civil War.

Richard Wormser has always and continues to address historical and social issues in his films and books. Among his novels that address social issues are Three Faces of Vietnam, Juveniles in Trouble, and American Islam: Growing up Muslim in America. His historical novels include The Titanic and The Rise and Fall of Jim Crow. Recently, he has written Defending the Accused: Stories from the Courtroom (2001) and To the Young Filmmaker: Conversations with Working Filmmakers (2002), both of which are written documentaries of his interactions with people in their respective fields. His body of work has and will likely continue to amass critical praise and introduce to his audience a new perspective on the issues he presents to his readers.

This biographical sketch was prepared by Chrystal R. China.