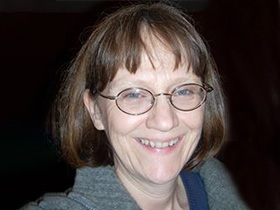 Susan Kimmel Wright, born 1950 in Somerset, is primarily known to the world of literature as a children's book author. She is also a member of the Pennsylvania Bar, an active worker in the Lutheran Church, and a participant in the literary life of the region. At the time of this writing, she lives in Bridgeville, PA.

Susan Wright was born in Somerset, Pennsylvania, on January 8, 1950. Her parents were Paul L. Kimmel, a carpenter, and Alice B. Kimmel, a homemaker. In 1970, Wright married David L. Wright, a civil engineer, with whom she had three children.

Wright is a Lutheran and has served on the board of Christian education for Zion Lutheran Church and School in Bridgeville, Pennsylvania. Her religious faith is a prominent theme in her books, which are published by a Mennonite publishing house. Wright's book Secret of the Old Graveyard, has received praise from the School Library Journal, Librarian's World, a publication of the Evangelical Church Library Association, and Bookstore Journal, a publication of the Christian Booksellers Association.

In 1992, Wright was named writer of the year by the Blue Ridge Writers' Conference. She is also very active in the writing world and serves on the steering committee for the Western Pennsylvania chapter of the Society of Children's Book Writers and Illustrators. She also belongs to the Mystery Writers of America, Sisters in Crime/Mysteries for Minors, and Penn Writers.

At the time of this writing, Wright lives in Bridgeville, Pennsylvania.