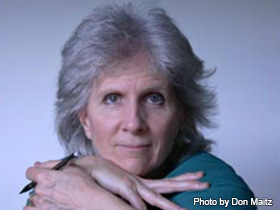 Bryn Mawr native, Janny Wurts is an author of science fiction and fantasy novels.Wurts' writings include Peril's Gate (2002), the third book in her series The Wars of Light and Shadow.

Janny Wurts, born in Bryn Mawr,is a fantasy and science fiction writer and illustrator. She has authored The "Cycle of Fire" Trilogy, The "Empire" Trilogy alongside Raymond E. Feist, and the ongoing "The Wars of Light and Shadow" series. Wurts collaborates on art projects with her husband Don Maitz.

Born December 10, 1953, in Bryn Mawr, Pennsylvania, Janny Wurts took an early interest in illustration from "seeing the fascination of words and pictures working together." At 13, young Wurts babysat and performed various odd jobs to earn enough funds to buy and care for her first horse. She was an avid reader while growing up, first inspired by her older brother's copy of Black Stallion by Walter Farley, she said in an interview with Writers Write. She frequently visited the local library, searching for and reading any adventure-themed books that she could, building her vocabulary.

Science classes captured her attention, which attracted her to explore her imagination. Her main encouragement for painting and illustrating came from viewing artwork while on school field trips. Writer and illustrator Howard Pyle of Conan the Barbarian, as well as other pulp illustrators like Frank Frazetta, also inspired Wurts to explore art. Other early pursuits included fencing, horse riding, and other outdoors activities, allowing her to search the woods and nature for more inspiration. She composed several novels while in high school. These stories were otherwise crude tales often rejected by publishers, though Wurts learned the rudiments of storytelling through this valuable practice.

Wurts earned a BAfrom Hampshire College in Massachusetts, focusing on creative writing and illustrating combined with her interest in various sciences. Unsure about going to a legitimate art school, she attended a college that appealed to broad themes, especially in the various sciences. While at college, she worked as a lab technician for telescopes, though she soon left her interest in the natural sciences, believing that her interest could better come together through art and writing, she told Crescent Blues. After graduating in 1975, Janny Wurts attended Moore College of Art for one semester for graduate school study. For the most part, Wurts was self-educated in art, experimenting with a broad range of painting media and finally settling with oil paint. She freelanced soon out of school, holding various odd jobs like graphic design, paste up, calligraphy, logo design, and spot illustration, even selling some of her artwork at monthly conventions. In this time, she logged more than 3,500 hours in small ocean sailboats, even traveling to Russia, Europe, Africa, and Korea to study artwork and see the world.

Her first published works were interior illustrations for chapter headers in Daniel P. Mannix's The Wolves of Paris (1978). She composed artwork for various war gaming publications, especially cover and magazine illustrations for Mayfair Game modules. She produced cover art for various major publishing houses in New York, going on to illustrate designs for her own book jackets. She authored her first book, Sorcerer's Legacy, in 1982. Her next novel, Stormwarden (1984), is about three maturing individuals on a distant world who try to fend off demons, the first book in the coming-of-age "Cycle of Fire" series. She continued the series with Keeper of the Keys in 1986 and Shadowfane 1988. During this time, she also co-authored the "Empire" trilogy with Raymond E. Feist. Set in the world of Tsurani, the trilogy involves Lady Mara and her struggle against the vicious politics of her home world in Daughter of the Empire (1987), Servant of the Empire (1990), and Mistress of the Empire (1992). At the World Fantasy Convention, Wurts and Feist outlined the plots for the first two novels in one afternoon, going on to overwrite one another's chapters several times. Describing her interest in writing about both science and fantasy themes to the St. Petersburg Times, Wurts says that "Fantasy takes the language of what's unseen, the language of dreams, the subtle energies, and draws on those...So I see fantasy as working with one-half of the equation and science fiction with the other."

The Master of White Storm (1992) concerned the mythical Eleven Kingdoms and two rebelling slaves fighting their wizard masters. In 1993, Wurts began a new series, "The Wars of Light and Shadow," with The Curse of the Mistwraith, about two half-brothers Arithon and Lysaer of opposing magical forces, light and shadow, as they attempt to overcome their suspicions of each other and fight against the Mistwraith, a mysterious fog which encircles the world of Athera. Her inspiration for this series came during her research of tactics and weapons, when she saw a documentary about the Battle of Culloden Moor. Kirkus Reviews panned Mistwraith, describing it as "A tremendous amount of hard work but no signs of genuine talent, composed of gnarled writing, a farrago of plot elements, and ideas no better than mediocre retreads." Candace Smith of Booklist Review, though, says that the book provides "Strongly sympathetic characters and a well-conceived setting will hook readers of epic fantasy." Ships of Merior (1995) follows the half-brothers once again as they become enemies, drawing the world into their rivalry. Another installment, Peril's Gate (2002), takes place 30 years after Curse of the Mistwraith.

Said Janny Wurts about the series to Writers Write: "I see this as one of the conflicts of awareness of our times—that we so often live the concept of the 'greater good.' That the ills of society can be healed from without, by systems of thought or government. This leads us to generalization—that what is good for the many supersedes what is good for the one. That, so much more sadly, the 'idealized' ends justify the means." With her fantasy works, Wurts attempts to write her stories differently from what she sees as an archetypal "good versus evil" scenario involving a muscular hero and a blonde damsel in distress. Describing gritty battles scenes in much detail, emphasizing graphic violence, also helps Wurts to dispel the common notion of fantasies as being noble, romantic crusades.

Wurts' painted artwork was exhibited at NASA's 25th Anniversary, the Art of the Cosmos at Hayden Planetarium in New York, and two exhibits of fantasy art the Delaware Art Museum and the Canton Art Museum. With collaboration such as with her husband, Wurts says that "you're not driving your own train, and when the two trains wreck, you're going to get a third track that's better than either one of you—or different—and you're going to love it just as well. So don't pay attention to the train wreck. Look at the tangent." While writing, Wurts says she likes to be close to nature, listening to music, and cluttering her work space with artwork of her characters as well as various objects she found while hiking. Writing and painting are two expressions which Wurts finds difficult to mix, using either her eyes or her heard. She also enjoys horse riding, archery, and music, especially performing one of her various stringed instruments and the bagpipes. On her website, she provides tips for aspiring writers and painters, as well as answers about her different fantasy worlds. At the time of this writing, Janny Wurts lives in the Florida countryside with her husband, coauthor, and illustrator Don Maitz, whom she met at an art convention.