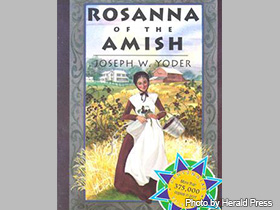 Joseph Yoder, chronicler of Amish life and culture, was born in Mifflin County in 1872.

Born in Belleville in 1872, Joseph W. Yoder would become the first successful Mennonite literary figure in the United States. As an educator, he valued clarity of thinking and knowledge so highly that it brought him into conflict with his fellow Amish, motivated him to preserve traditional Amish music, and drove him to write defenses of the Amish in America, most prominently his 1940 book, Rosanna of the Amish. He died in 1956.

Joseph Warren Yoder was born on September 22, 1872, in Belleville, Pennsylvania, one of four children of Crist and Rosanna Yoder. After 60 years of bachelor life, he married Emily Lane of Lane's Mills, Jefferson County on February 18, 1932, and the couple bought a house in Huntingdon, Pennsylvania.

Yoder's education was a traditional Amish one with the addition of "singing schools" that came to the Big Valley in Pennsylvania during the 1890s. He would go on to teach at Milltown for two years (1892-1894), before enrolling at the Brethren Normal School in Huntingdon and graduating in 1895. Later he would move to Indiana to attend the Elkhart Institute, at which he taught English and music. The next year, 1898, he moved to Illinois' Northwestern University. Much of his subsequent career would be spent as a college recruiter for Juniata College, conducting singing schools for Mennonites throughout the Commonwealth, and attempting to achieve reforms within the Amish and Mennonite churches in the Mifflin and Huntingdon County areas.

Yoder's literary efforts began rather late in his 60s. Though many authors speak of the "Muse" or some other representation of inspiration to create, Yoder's motivation to create the work for which he is best known came from outside himself. Ruth Lininger Dobson's 1937 novel Straw in the Wind so incensed Yoder that he felt obligated to "correct" her depictions of stereotypes about Amish life. More galling than the stereotypes to Yoder were positive reviews the book received and the Hopwood Prize that its author was awarded. To rectify the situation, Yoder wrote Rosanna of the Amish, the story of his mother's life (and his own) with the aim of debunking stereotypes about tyrannical church leaders and the "dumb Dutchman." He published this book in 1940, following it in later years with a sequel, Rosanna's Boys (1948), and other books preserving what he regarded as a true picture of Amish culture. His musical background enabled him to transcribe traditional Amish slow music into musical notation (Amische Lieder, 1942), despite the discomfort that some Amish would feel at that prospect. Much of the rest of his writing consists of recording of Amish customs and of Biblical exegesis in relation to Amish cultural and religious practice, particularly the practice of Meidung, or shunning.

Joseph W. Yoder died on November 13, 1956, in Huntingdon, Pennsylvania, from lung cancer. He is buried in the Locust Grove Cemetery in Belleville, Pennsylvania.