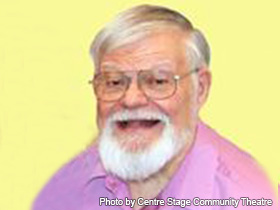 Wellsboro native, Gary A. Yoggy is the editor of Back in the Saddle: Essays on Western Film and Television Actors (1998).

Gary A. Yoggy was born on July 14, 1938, in Wellsboro, Pennsylvania. He got his BA from the University of Michigan, his MA from Syracuse University, and his doctorate from Michigan State University. As a teacher at Corning Community College, Yoggy created the course "The American West," and quickly became an authority on American Westerns. He has written and spoken extensively on the subject. Yoggy has also worked to revive "old-time radio," through his long-standing connection to the Elmira Little Theatre, with his show, "A Visit to the Golden Age of Radio." At the time of this writing, Yoggy resides in the Elmira / Corning area.

Gary A. Yoggy was born on July 14, 1938, to Albert and Ernesta Yoggy in Wellsboro, Pennsylvania. The son of a machinist and a legal secretary, Yoggy enrolled at the University of Michigan after graduating from high school. At Michigan he received a Bachelor of Arts with high distinction in 1960.

After graduating from Michigan, Yoggy moved on to graduate school at Syracuse University where he earned a Master of Arts in 1962. With his Masters, Yoggy took an instructor position at Corning Community College in Corning, New York, in 1963. In 1965, he became an assistant professor, which lasted for two years before he became an associate professor in 1967. During his assistant professorship, Yoggy's life continued to progress. In 1969 Yoggy became the director of continuing education at Corning. 1971 saw him begin his doctoral studies at Michigan State University, which concluded in 1972. Also in 1971, Yoggy became a member of the board of directors of the New York State Association for Continuing Education. Adding more to his workload, Yoggy was brought onto the Steuben County Economic Opportunity Program board of directors in 1972. A year later, he was installed as president of both the Steuben County board of directors and the New York State Association for Continuing Education, acting as president from 1973 to 1975.

Yoggy left both his post as director of continuing education at Corning and the New York State Association board in 1977. That same year he became the president of the Greater Southern Tier Boards of Cooperative Educational Services (BOCES), a position he held until 1979, the same year he left the Steuben County Economic Opportunity Program board. Again, Yoggy's life did not remain stagnant for long. 1981 saw him become a member of the Elmira Psychiatric Center board of visitors, and 1982 saw him join the Elmira Little Theatre board of governors. As these changes were going on, Yoggy was busy developing a course at Corning Community College called "The American West" that debuted in 1981. "A segment of the course was devoted to the effect of the West on American popular culture (art, fiction, music, films, radio, and television). This led to a series of papers," including "When Radio Wore Spurs" that Yoggy presented to the Popular Culture Association's annual meeting.

Two years after the debut of his new course, Yoggy was promoted to the position of full professor in history at Corning Community College. In 1985, Yoggy took a brief hiatus from the Elmira Little Theatre's board of governors, and in 1986, thanks to the success of "The American West" and his reception at the Popular Culture Association, Yoggy became his area's chairperson for the Popular Culture Association. 1987 saw another one of his essays, "When Television Wore Six-guns: Cowboy Heroes on TV" be published in a collection entitled Shooting Stars. A year later, in 1988, Yoggy returned to the Elmira Little Theatre's board for good.

The next four years saw a Yoggy's interest and dedication to old-time radio, especially old-time Westerns, grow further, and in 1992 he was honored with the Alan Rockford Award from National Friends of Old-Time Radio. His work with the Elmira Little Theatre and his production of "A Visit to the Golden Age of Radio," which had started in 1987, had a definite influence on his receipt of that award. Having been on the Elmira Little Theatre board off and on since 1982, Yoggy was elected board president in 1995, a position he still holds today. Also that year came the publication of Yoggy's first book, Riding the Video Range: The Rise and Fall of the Western on Television, and the following year saw the publication of his article "Prime Time Bonanza! The Television Western" in the book Wanted, Dead or Alive. His published career continued to expand when he was asked to edit the 1998 book Back in the Saddle: Essays on Western Films and Television Actors.

In 2001, Yoggy retired as a professor at Corning Community College and received emeritus status. At the time of this writing, he continues to work with the Elmira Little Theatre and, in 2007, presented the 20th anniversary edition of his "A Visit to the Golden Age of Radio."