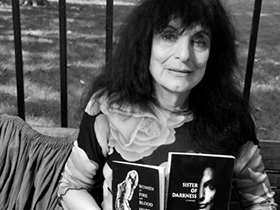 Angelika Bita was born on the island of Zante (Zakynthos) on December 23, 1935. As with many authors, the landscape of her native land wasparticularly important to her. She told Contemporary Authors Online, "My work has been shaped by both the richness and constraint of my native island, Zakynthos. I found there in small compass all the variety of human experience, and the themes of my work." Bita wasthe daughter of George Bitas, a one-time Greek Army general, and Eleni Bitas, a painter. Though tremendously attached to Zakynthos, Bita found the traditional roles of women too stifling to remain there and traveled to the capital of Athens. While there she graduated with degrees from the Greek Conservatory of Music in 1954 and from the Athens School of Drama in 1956. While in Athens, she met and married Michael Rethis with whom she had two sons: Philip and Kimon. The family emigrated to the United States in 1959. She found her married life with Rethis greatly dissatisfying and divorced him. In 1968, she married Robert Zaller, whom she calleda "kindred spirit.

Though her travels with her first husband throughout smaller towns in America were stifling to her, her life with Zaller proved much more liberating. They spent much of the early years of their marriage in Miami, Florida. While there, Bita earned an MA in drama from the University of Miami. She wrote several plays that found their premieres in various Miami venues. She also wrote a number of volumes of poetry, focusing on gender relations and her Greek heritage, among other themes.

She received high praise from numerous corners for her poetry and drama. Anais Nin once wrote of her: "Her words are strong, body and soul in balance. Her vision is direct, unifying and complete." Konstantinos Kokosis from the Greek Embassy wrote that her work was "stirring ... passionate ... uniquely moving.... The journey of Greek history could not have found a more ideal voice or a better interpreter."

In 2005, Lili Bita's published a memoir, Sister of Darkness. This work detailsBita's early life on her beloved Zakynthos. She recalledvividly her experiences during the Italian and German occupations of her homeland, as well as the Greek Civil War that followed that war. She also confrontedher perception of the suppression of women in traditional Greek society. Fran Metzman wrotein the Wild River Review: "Sister of Darkness reads like a gorgeous, lush lyrical poem, but Bita leads us through a labyrinth into deep chasms of physical and emotional brutality, offering few roads out. Each segment of her book with its precise and unvarnished images hits us hard, making us all the more engaged when Bita finally emerges into daylight." In 2012, she wrote asecond memoir, titled The Storm Rider: A Memoir, focusing on her late son Philip.

In the fall of 2006, she directed the world premiere of the play Who Killed Jimmy Hoffa at the Philadelphia Fringe Festival, an organization with which she has worked for nine years. She also touredwidely with her one-woman show The Greek Woman Through the Ages. Bita presented poetry readings, performance pieces, and dramatic readings from her personal memoir in various theater settings. Lili Bita livedin Bala Cynwyd with her husband Robert Zaller.