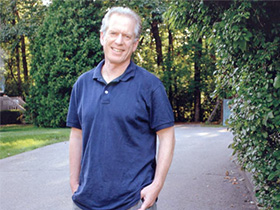 A Philadelphia native who earned his bachelor's degree in creative writing from Carnegie Mellon University, Jeffrey Zaslow was well known for his heartfelt and inspirational columns in the Wall Street Journal and his bestselling nonfiction books. Jeffrey Zaslow died on February 10, 2012, from a fatal car crash in northern Michigan.

Jeffrey Zaslow was born to Harry and Naomi Zaslow in Broomall on October 16, 1958. He earned his bachelor's degree in creative writing from Carnegie Mellon University in 1980. In 1987, Zaslow married Sherry Margolis, a news anchor for a Fox television station in Detroit, and together they had three daughters—Jordan, Alexandra, and Eden.

Zaslow, famously known for his heartwarming and inspiring columns in the Wall Street Journal, first worked at the Journal from 1983 to 1987. Winning out over 12,000 other applicants in a competition, Zaslow replaced Ann Landers as the advice columnist at the Chicago Sun-Times in 1987 and held his position there until 2001. Receiving many letters from lonely readers seeking advice, Zaslow hosted a charitable yearly party—the "Zazz Bash"—with the intent of bringing single people together. Over the course of twelve years, the Zazz Bash led to 78 marriages and had over 7,000 attendees a year. Zaslow also wrote columns for USA Weekend, a USA Today-created Sunday supplement for hundreds of other papers.

In 2003, Zaslow returned to the Wall Street Journal as a senior writer and columnist, delving into a range of topics, such as how iPods enable people to walk around listening to their own personal soundtracks and how simple lunchbox letters from fathers to daughters can be powerful communication tools. Ultimately, Zaslow's columns centered on life transitions and "tending to the hearts of its readers," a theme also present in several of his nonfiction books.

Jeffrey Zaslow is also well known for co-authoring a number of bestselling nonfiction books, including The Last Lecture (2008), which he wrote with Carnegie Mellon University computer-science professor Randy Pausch. Pausch, who had been diagnosed with pancreatic cancer and told he had only months to live, delivered an inspirational presentation—or "last lecture"—on his perspective of life's lessons, such as how "we cannot change the cards we are dealt, just how we play the hand." Zaslow wrote a moving column after attending the presentation, and it became very popular, leading the two to partner to write a book. During his final few months, Pausch spoke to Zaslow on the phone daily during his morning workout routine. Translated into over 48 languages and reaching the coveted #1 spot on several bestselling lists worldwide, The Last Lecture became a hit sensation. Published in 2008, over five million copies of The Last Lecture have been sold in English, and the book remained on the New York Times bestsellers list for over 112 weeks.

Gabby: A Story of Courage and Hope—a memoir that Jeffrey Zaslow collaborated on with congresswoman Gabrielle Giffords and astronaut Mark Kelly, her husband—also became a New York Times bestseller. The memoir, published in 2011, followed the congresswoman's shooting.

In 2009, Zaslow coauthored Highest Duty: My Search for What Really Matters with Chesley Sullenberger, the airline captain who heroically landed US Airways Flight 1549 in New York's Hudson River. Sullenberger's memoir also landed on the New York Times bestseller list. Also in 2009, Zaslow published The Girls from Ames, a book about female friendship and the powerful bonds that are associated with it. In the book, Zaslow weaves together stories from eleven childhood friends from Ames, a small town in Michigan. Zaslow describes how the women cultivated their friendship over the forty-year period and how it weathered many challenges, such as moving away to different parts of the country, marriage, motherhood, divorce, death, and cancer. This story of lifelong friendship also made the New York Times bestseller list and was named one of the "Ten Best Books of the Year" by People magazine. The Girls from Ames is also being adapted into a movie by Lifetime Television.

In 2012, Zaslow wrote and published The Magic Room: A Story About the Love We Wish for Our Daughters. Zaslow centers the book around Becker's Bridal, a family owned bridal gown store located in a small town in Michigan. In the nonfiction narrative, he chronicles the history of the store and of the store owners, while also speaking to the latest trends in the wedding industry and the high marriage and divorce rates. Weaving in stories of several brides and their families, Zaslow poignantly discusses marriage, love, and life in his last book.

Jeffrey Zaslow earned many accolades for his accomplishments as a columnist and writer, as well as for his work as a humanitarian and his dedication to service and helping others. For using his column to help thousands of disadvantaged children, he was awarded the Will Rogers Humanitarian Award in 2000. Additionally, Zaslow was twice named "the best columnist in a newspaper with more than 100,000 in circulation" by the National Society of Newspaper Columnists. In 2008, the New York Newspaper Publishers Association presented Zaslow with the Distinguished Column Writing Award.

Jeffrey Zaslow died on February 10, 2012, in a car crash in northern Michigan.