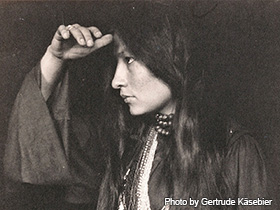 Born and raised on a Sioux Indian reservation, Zitkála-Šá became a celebrated Native American literary and political figure in the early twentieth century. She took an active role in many different Indian organizations seeking to redress their grievances, specifically the Society of American Indians, where she served as editor for the Society's journal in addition to secretary. Later she founded and presided over the National Council of American Indians, which was a transcontinental effort to unite all Native American tribes. Her most famous literary works include the autobiographical account American Indian Stories (1921) and collection of Indian folklore Old Indian Legends (1901).

Zitkála-Šá, which means "Red Bird," was born in 1876 on the Pine Ridge Indian reservation in South Dakota, home of the Dakota Sioux tribe. She was one of three children born to a Yankton Nakota woman named Ellen Tate Iyohinwin and a white man named Felker, who deserted the family. At the age of twelve, her mother sent her to Wabash, Indiana, home of White's Manual Labor Institute, a Quaker missionary school for Indians that she had attended in her youth. Upon returning to the reservation three years later, she stayed with her family for four years, all the while feeling isolated from her native roots. She then decided to continue her education and assimilation into mainstream American culture, of which her mother disapproved. After a brief stint at the Santee Normal Training School in nearby Nebraska, she attended Earlham College in Indiana on scholarship, where she received honors and awards for her achievements in writing and oration.

Her musical talent earned her a scholarship to the New England Conservatory of Music in Boston, Massachusetts. She then traveled to Paris, France, for the Paris Exposition as a violin soloist. After returning to the U.S. in 1898, she became a teacher at the famous Carlisle Indian Industrial School in Carlisle, Pennsylvania, which was founded by Colonel Richard Pratt in 1879 for the purpose of assimilating and "civilizing" Native Americans. Colonel Pratt sent Zitkála-Šá back to her reservation to round up prospective students for Carlisle that summer, but she decided not to return to Carlisle to teach. After relocating to Boston, she began her professional writing career. Numerous autobiographical essays of hers were published in two of the more prestigious magazines of the day: The Atlantic Monthly and Harper's Monthly. Later, she published a collection of short stories and essays in American Indian Stories (1921). Her early writings, such as these, dealt with her experiences as a young woman raised in Sioux tribal culture being institutionalized and educated in American culture. Old Indian Legends (1901) was a collection of Indian folklore and short stories passed down to her from the elders in her tribe when she lived on the reservation. Her works were the first major literary pieces written by a Native American in English that deal with Native American culture and the process of assimilation from an Indian's point of view in turn-of-the-century America. In collaboration with composer William Hansen, she wrote a substantial amount of the music and lyrics for the opera Sun Dance (1913).

Her later writings were more political in nature, focusing on government reform, enfranchisement, and land settlement conflicts between Indians and Americans. After marrying a fellow Sioux named Ray Bonnin, the couple moved to Washington DC, where they lobbied relentlessly for Indian rights and citizenship. This led her to adopt her American name, Gertrude Bonnin. Her later writings criticized the Bureau of Indian Affairs and shed light on the corruption within the government agency, leading many Native Americans to lose all faith in it. They became involved with other Indian organizations, most notably the first Indian run organization, the Society for American Indians, for which she served as chief editor for the Society's journal and secretary. Bonnin and two white men authored Oklahoma's Poor Rich Indians: An Orgy of Graft and Exploitation of the Five Civilized Tribes, Legalized Robbery (1924), exposing the corrupt land allocation policies in place at the time in Oklahoma. This book resulted in a formal government investigation into the matter, led by the Meriam Commission. This later laid the groundwork for the Indian Reorganization Act in 1934—a substantial political victory for Native Americans in the conflict over land settlement.

In 1930, Zitkála-Šá succeeded in creating the first trans-tribal Native American organization, the National Council of American Indians, which united members of different tribes to lobby the government for better treatment and policy toward Native Americans throughout the country. She led this organization until her death in 1938. She was buried in Arlington National Cemetery because her husband fought in World War I.

Note: Essays published in Harper's and Atlantic Monthly were all re-published as a collection in the publications below.