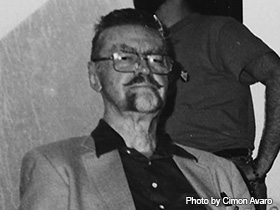 L. Sprague de Camp, one of the most prolific fantasy and science fiction writers of the 20th century, made his home in Villanova.

Sprague de Camp was one of America's leading writers and scholars of fantasy and science fiction. De Camp was born in New York on November 27, 1907, and began his science fiction career in the 1930s (of the generation that included Isaac Asimov, Robert A. Heinlein, and A. E. van Vogt). De Camp was concerned with entertaining the reader, and as a result his science fiction rarely achieved great psychological or sociological depth. During his later years, most of his fiction was concentrated in the fantasy field through his work of editing and expanding upon the Conan stories of Robert E. Howard. De Camp died on November 6, 2000, in Plano, Texas.

Lyon Sprague de Camp was born in New York City on November 27, 1907. His early education was in New York, and in 1926 he moved to California in order to attend the California Institute of Technology. He earned his Bachelor of Science in Aeronautical Engineering in the summer of 1930, going on to earn a Master of Science degree in Engineering from Stevens Institute of Technology in 1933. De Camp met and marriedCatherine Crook in 1940. De Camp also served as a Lieutenant Commander in the US Naval Reserve in WWII (along with his most famous contemporary, Isaac Asimov). For the last half-century, he spent his life working on his literature, first in suburban Philadelphia and then in Plano, Texas.

De Camp's science fiction is marked by a concern for linguistics and historical forces. This concern was seen in his first published story, The Isolinguals, published in the September 1937 issue of Astounding Science Fiction. After this story, De Camp's probably best-known science fiction novel was published in 1941. Entitled Lest Darkness Fall(1941) (which first appeared in the December 1939 issue of Unknown), it contains many of the themes and situations that de Camp would repeatedly turn to throughout his literary career. De Camp arranges for his protagonist, Martin Padway, a twentieth-century American archaeologist, to be suddenly transported into sixth-century Rome. The story focuses on de Camp's belief in his researched theoretical principles of time travel and alternate history as, according to the narrator within the novel, "if an object is displaced in time, into the past, any action it initiates will not alter time — it is not possible to change the course of history. Instead, a new branch of time begins, establishing an alternate and equal time-branch existing simultaneously with the original." De Camp allows Padway to succeed in altering history by invoking mid-twentieth-century America's belief that scientific progress is the answer to the world's problems. This novel was de Camp's first to be published as a complete volume, offered by H. Holt and Company in 1941.

According to A.M. Dellamonica, "L. Sprague de Camp's Lest Darkness Fall is one of the founding works of the alternate-history genre, and a historical artifact in its own right." The reviewer goes on to state that the "misadventures [of Martin] are wrapped in vivid historical detail, bringing Rome to life around its lone transplanted American." Dellamonica points out the prime flaw of De Camps novel, that as Martin is "striving to change the course of a phenomenally important event in European history" a great deal of irony lies in how he stands a fair chance of wiping out the culture that spawned him. However, as De Camp "does not linger on this contradiction," he is instead giving readers scope to engage with Martin's "infectious spirit of adventure."

In 1948, de Camp published The Wheels of If (1948), a collection of short stories composed over the previous ten years. His next novel was Genus Homo (1950), written in collaboration with P. Schuyler Miller. This novel once again focuses on how de Camp places his protagonists in an alternate time period, either the historical past or the far future. Generally, the time-travelers must struggle to survive, pitting their wits, courage, and technical knowledge against the forces of darkness, superstition, and ignorance. The protagonist Henley Bridger leads the surviving humans in a struggle to help intelligent gorillas to fight off a vicious tribe of chimpanzees. De Camp uses this milieu to deal with various sociological themes. They vary from man against nature, man against man, and the belief that man is supreme and always will be. Thus, de Camp uses science fiction novels to promote a better understanding of society around him.

De Camp was, at this time, becoming known for his most extended work, the Viagens Interplanetarias series. In the hypothetical future, he posits Brazil as the dominant power in the world and the natural driving force of space exploration. The title of the series is Portuguese for "Interplanetary Tours," with most of the stories taking place on the planet Krishna, though the planets Vishnu and Ganesha often figure as secondary settings. De Camp portrays this collective as all encompassing; and according to William Robbins, the only rule followed is that "science and technology beyond the cultural level of the peoples inhabiting such a planet as Krishna cannot be introduced by more advanced visitors." This premise is the basis for a number of the plots in the series, with a partial collection of the series being published in 1971 by Twayne Publishers. This collection included all already published aspects of the Viagens Interplanetarias, from the Rogue Queen (1951), to Cosmic Manhunt (1954), to The Search for Zei (1962), and finally The Hand of Zei (1963). In the 1980s, de Camp added other novels to this collection, the most famous of these being the "sword-and-sorcery" adventure, The Hostage of Zir (1977).

De Camp also produced science fiction not related to the extended work Viagens Interplanetarias. The most famous of these was his other "sword-and-sorcery" science fiction novel, The Great Fetish (1978). Along with this science fiction focus, de Camp also wrote light fantasy collections. These are known as the Harold Shea stories, which throughout the 1940s and 1950s de Camp had collaborated with Fletcher Pratt in order to write. De Camp later added a second series, both individually and collaboratively with such writers as Christopher Stasheff, Tom Wham, Holly Lisle, and John Maddox Roberts. More recently, all three volumes of the original series have been issued together as The Complete Compleat Enchanter (1989). Also, posthumously, the original tales and de Camp's additions from the 1990s will be released in 2007 as The Mathematics of Magic.

Overall, throughout his career de Camp consistently turned out exciting science fiction. His research into many areas fills his novels with brilliant colors of satire, history, politics, sociology, and humanity. De Camp's characters are people placed in uncomfortable and unusual situations where they are forced to use all the inner strength and belief they possess. De Camp uses the clash of values and culture throughout his novels as a way to shock the reader into believing the reality of the stories he created. Sadly, De Camp passed away on November 6, 2000, at his home in Plano, Texas.