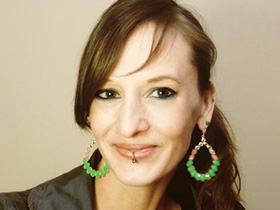 dawn lonsinger (who prefers her name in lowercase) holds four literary degrees and is a poet and essayist whose first chapbook, the linoleum crop, won the 2007 Jeanne Duval Editions Chapbook Contest.

dawn lonsinger (who prefers her name in lowercase) holds four literary degrees and is a poet and essayist whose first chapbook, the linoleum crop, won the 2007 Jeanne Duval Editions Chapbook Contest. Many of her poems and essays have won awards and prizes, such as four Dorothy Sargent Rosenberg Poetry Prizes, two Utah Writers' Contests, and the Richard Scowcroft Prize, to name a few, and lonsinger is also the recipient of a Fulbright Fellowship. She is the author of the chapbook the nested object (2009), and her full-length poetry collection, Whelm, won the 2012 Lost Horse Press Idaho Prize in Poetry and went on to become the Shelf Unbound Notable Book of the Year in 2013. dawn lonsinger was a featured poet in the 2016 Public Poetry Project of the Pennsylvania Center for the Book and, at the time of this writing, is an Assistant Professor of Creative Writing & English at Muhlenburg College.

dawn lonsinger (who prefers her name in lowercase) was born on April 17, 1976, and is one of six siblings who grew up in West Chester, which lonsinger describes on her website as the "deer-streaked woods of Pennsylvania outside of Philadelphia, not far from small towns with names too lascivious to mention..." She is the first in her extended family to earn a college degree and has earned four overall: a BA in English Literature & Photography (1998), an MA in English Literature (2000), both from Bucknell University, an MFA in Creative Writing — Fiction from Cornell University (2005), and a PhD in Literature and Creative Writing from the University of Utah (2012).

Bucknell awarded her the Harold Miller Prize for Best Undergraduate Honors Thesis in 1998 and in 1997 selected her for its Seminar for Younger Poets Fellowship. lonsinger is a poet and essayist whose work "gives voice to those things that cannot be categorized, enumerated, or named...," says Pulizer Prize-winning author Anthony Doerr. She was selected as a Fulbright Fellow to travel to South Korea in 2000, and in 2005 won the Corson-Bishop Poetry Prize and the Beullah Rose Poetry Prize for her poems.

Many of lonsinger's poems and essays have won contests and awards, such as four Dorothy Sargent Rosenberg Poetry Prizes, the Phoebe's Greg Grummer Poetry Prize, two Utah Writers' Contests, and the Richard Scowcroft Prize, to name a few. Her work has also appeared in numerous publications, including American Poetry Review, Colorado Review, Black Warrior Review, Crazyhorse, and several others.

"lonsinger is interested in the spaces between things, the wild element in each of us," Poets' Quarterly reviewer Valerie Wetlaufer says of the poet's second chapbook, the nested object (2009). Wetlaufer describes the poems in this collection as ethereal in quality, varied in topic (from "love poems to nature...and household pets"), and sprinkled with absurdist, yet thematically rooted, imagery. "At first, when beginning to read this book," she writes. "I felt like Alice in Wonderland, entering a foreign world, but by the end, I knew I was somewhere familiar."

In 2012, lonsinger's full-length collection of poems, Whelm, won the Lost Horse Press Idaho Prize in Poetry. It went on to become the Shelf Unbound Notable Book of the Year in 2013, and the poem "Sundress" from the collection was selected for publication by the Public Poetry Project of the Pennsylvania Center for the Book in 2016. The work even had its own book trailer online.

Hailey Haffey of Quarterly West refers to Whelm as "a cabinet of curiosities." She says lonsinger can be seen as "a poetic healer whose words respond to the world's inscriptions of violence with her much stronger art: compassionate representation of fragile things."

According to her website, lonsinger has held positions as an editor for the Western Humanities Review and the Women's International League for Peace and Freedom, has taught poetry workshops, and has designed six original courses and taught them: at Cornell University, at the University of Utah, at Salt Lake City Community College, for Johns Hopkins University's CTY Program, in third grade classrooms, at inner-city tutoring centers, and at girls' detention centers.

At the time of this writing, dawn lonsinger is an Assistant Professor of English at Muhlenburg College, co-facilitates Muhlenburg's Creative Writing events, organizes outreach (e.g. Student Writers in the Classroom at local elementary schools), and advises the literary magazine, Muses.

In addition to US states, such as Ithaca, New York, and Salt Lake City, Utah, lonsinger has resided in Italy, South Korea, Scotland, and Mexico. At this time she lives in Pennsylvania with her husband, where she continues to live her mission of "love, community, humanity, and beauty above all else," as she expresses on her website.