Acorn from Space: The Kecksburg Incident 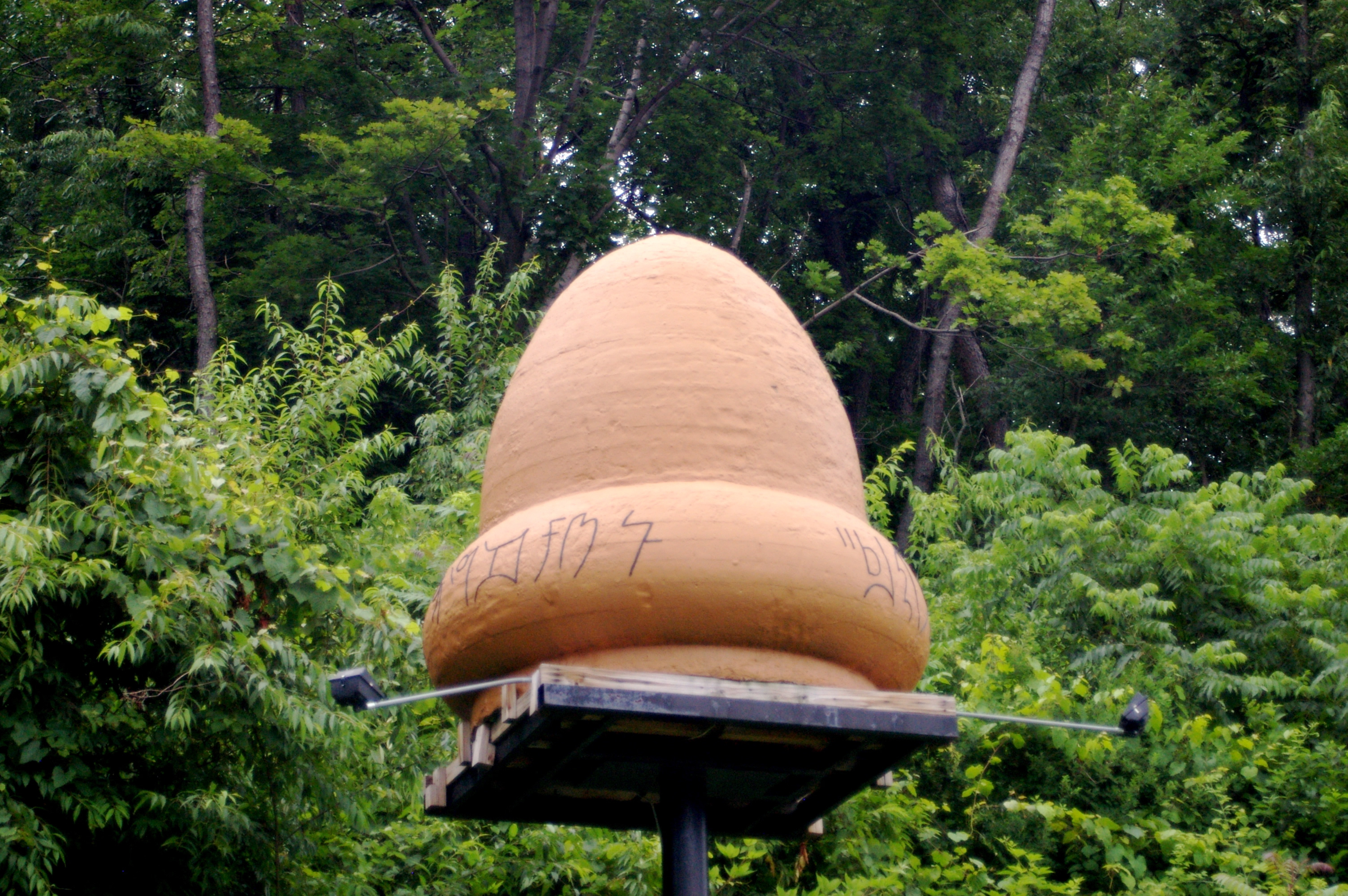 Romaryka
In 1965, an object reportedly shaped like an acorn streaked over the skies of Kecksburg.

Once a year in the small town of Kecksburg, Westmoreland County, the streets are invaded by flying saucers. The parade is part of their annual UFO Festival, which is put on by the Volunteer Fire Department. Each year, the citizens, and a large number of UFO enthusiasts from across the state, build fake spacecrafts and dress in costumes for a weekend of mostly-lighthearted celebration, but the paranormal researchers and experts on UFOs and Bigfoot who are honored speakers take their subjects very seriously. Kecksburg, also known as “Pennsylvania’s Roswell,” has been a favorite locale among such researchers, and it is easy to see why. The 2010 UFO Festival marks the 45th anniversary of what has become known as “The Kecksburg Incident,” which some believe is one of the most compelling cases for extraterrestrial existence in U.S. history.

In the past 45 years, the story of the Kecksburg Incident has taken numerous twists and turns. Time has certainly not stopped the development of new studies, the discovery of new evidence, or the creation of new theories. This continually developing story has been a part of Kecksburg for almost half a century, and, whatever story you believe, it is undeniable that the events have left their mark on the small community.

Dec 9th, 1965. A fireball streaks across the sky above northeastern North America. Sightings as far apart as Indiana, New York, Virginia, and Ontario are reported in newspapers across the country. The falling object even touches off many small fires throughout Ohio and Pennsylvania as flaming debris falls from it, the Associated Press reports. Unfortunately, this is where agreement on what happened on that day begins to fall apart.

Witnesses in Kecksburg claimed that the object crashed into the woods nearby the small western Pennsylvania town. Today, many people believe this was in fact an optical illusion and that the object could not have landed in that area; however, at the time, the US Army took the sightings very seriously. The area was eventually roped off and citizens who came out into the woods to investigate the falling object were turned back by armed men. The Army reported that, after an investigation of the woods around Kecksburg, nothing was found. Witnesses dispute this claim.

Bill Bulebush claims he saw the object turn around in the sky “just like it was controlled” before crashing into the woods. Intrigued, he drove out to investigate and found a 10 foot long acorn shaped object smoldering in the woods. The way it glowed, cracked, and sparked scared Bulebush, who says he did not get too close to the object and, when he heard people coming, ran home. 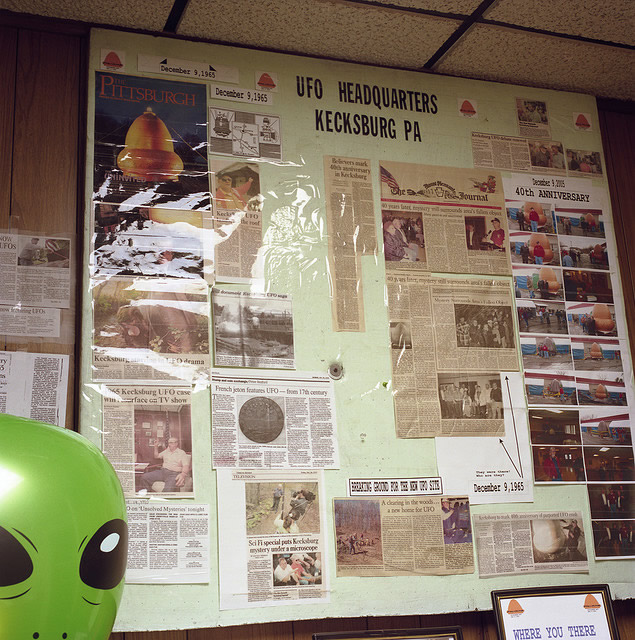 Stephanie Benassi
This bulletin board at the Kecksburg Volunteer Fire Department Bar keeps track of all things related to the Incident.

James Romansky saw it too. According to his account, he was part of a group of volunteer firefighters who came upon the object in the woods when they were responding to what they thought was a plane crash. Instead he found a mysterious metal object buried in the ground and covered in hieroglyphics. He claims he was then ordered to leave by mysterious men in trench coats and that he later saw the military carry the object away on a flatbed truck. This flatbed truck, carrying a mysterious object, was later seen leaving the area by a number of other witnesses. Additionally, Micheal Rambacher, a security officer for the Air Force, claimed to have guarded the object which arrived on a flatbed truck and which he believed was not of this world.

These witnesses are, of course, attacked and discredited by the more skeptical members of the town. Why did Bulebush run away? Can Romansky be trusted in light of his criminal record? How about Rambacher, who is now a UFO investigator and admits to never personally seeing the object? Does the similarity between the accounts attest at all to their credibility? These questions are hotly debated in Kecksburg, and across the country, to this day.

And by no means has the evidence stopped developing. In an article in the Daily Courier published November 9, 2010, Stan Gordon, who has spent years researching the topic, claims that “I just recently had numerous people speak to me about the incident.” If anything, deciphering what happened has only gotten more confusing.

In 2003, a lawsuit was filed against NASA to release the documents from the military investigation. Then, when making a statement on the lawsuit in 2005, a NASA spokesperson told the Associated Press that in fact a Russian satellite was discovered on the site; however, this possibility had supposedly been ruled out conclusively in a study of the orbital analysis of all known man-made crafts orbiting at the time by one of NASA’s own scientists.

Conflicting statements and scientific studies have been abundant over the years. Trajectory analysis of the fireball deemed Kecksburg an impossible landing spot; then an error analysis of this study discredited it. Broken tree branches have been aged to show what may be the path the object took to the ground; or maybe these trees were simply damaged by ice. Soil analysis shows damage to the soil around the time of the supposed crash; however, it is minimal, and not nearly large enough to suggest a crash landing. Some suggest that maybe this simply discredits a meteor, while a UFO could have controlled or damped its crash. The back-and-forth of studies and theories is enough to give any researcher a headache. 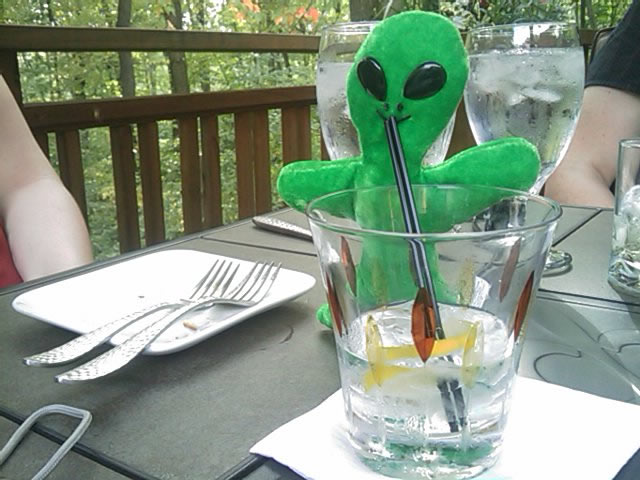 Augie Ray
This toy alien sold at the 2009 UFO Festival in Kecksburg reflects the lighter side of the Incident.

So what really happened? It is likely that most of us will never know for sure and those who claim to will never agree. However, it is easy to see the effect that that it has had on this small town. The topic is still hotly debated in Kecksburg. While some are convinced that an alien craft crashed in the woods outside of town, others find the story ridiculous and the media attention to their town annoying and intrusive. Kathy Leeper, a bartender in Kecksburg, told the Post Gazette in 2003 that patrons “were talking about it just the other night.”

Despite the controversy, the incident has become a lasting part of the town’s culture. In 2005, a UFO Store was opened in the town to profit off it its attention, and a replica of the object seen in the woods, which had been made as part of a documentary several years earlier, was mounted in front of the local fire station. After the 2010 “Old Fashion Days and UFO Festival,” the Daily Courier reported that there is talk of finding a new location for the town’s annual celebration because of the large crowds which attend. It seems that time has only heightened the interested in the incident.

No matter what you believe, the flying saucers and space ships which descend on the town of Kecksburg once a year, the souvenir “space acorns,” and the flying object which hovers perpetually outside the fire station are real, even if they are manmade. The cultural phenomenon which has developed in Kecksburg seems almost more extraordinary if you believe, like many in the town do, that nothing at all happened in Kecksburg on that December night in 1965.

The Center would like to thank Stephanie Benassi for her assistance illustrating this article.