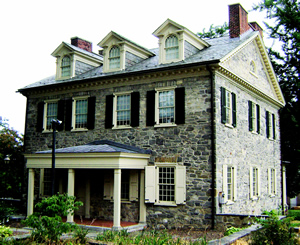 Matthew R. Hengeveld
Trout Hall has been a feature of Allentown long before it was Allentown.

To the people of Allentown, Trout Hall is the last remaining landmark unchanged from the days of the Revolution. The walls of this house have seen Allentown transform from a resting stop for travelers into the third largest city in the state of Pennsylvania. Nestled in the center of the city, Trout Hall, erected in 1770, stands as the oldest house in Allentown. Although it originally served as a summer oasis, it also became a safe haven during the American Revolution, a home, and a school. Throughout the years, Trout Hall would be a chameleon, constantly changing its function to meet the needs of its various owners. These owners would accompany the house throughout the centuries, helping to shape it into its present state.

The founder of Allentown, William Allen (1704-1780), was a wealthy shipping merchant and a loyalist to the English Crown. He served as the Mayor of Philadelphia and, in 1762, was elected as Chief Justice of the Pennsylvania Supreme Court. All of this service helped Allen become an influential part in the development of Pennsylvania. Along with his father-in-law, lawyer Andrew Hamilton, Allen helped choose the location of Pennsylvania’s capital and the Pennsylvania State House, now Independence Hall. He would soon, however, provide Pennsylvania with another landmark in history. 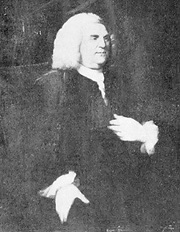 Wikimedia Commons
William Allen was Mayor of Philadelphia, a jurist and the eponymous Allen of Allentown.

In 1735, Allen purchased 5,000 acres of land in northern Pennsylvania. By 1762, he had laid out the plans of a 42-block town that he called Northampton. The name, however, never stuck and it was mostly referred to as Allen’s Town, and then simply combined to Allenstown. It wasn’t until 1838 that the town’s name officially became Allentown. On this land, Allen built a simple log house to be used when he went hunting or wanted a peaceful place to relax. In 1763, however, while he and his daughters were in England, Indians attacked and killed 15 people in a neighboring town just six miles away. Because of this incident, many people fled to Allentown for safety, leaving the town with too many people and not enough water or supplies. On January 15, 1767, William Allen deeded the town to his son, James Allen, and left, never to return to America.

James (1742-1778), Allen’s third son, followed in his father’s footsteps. After graduating from college in 1759 and law school in 1765, he was admitted to practice law before the Supreme Court. On October 6, 1767, he was elected as common councilman in Philadelphia and later elected to the Assembly by an almost unanimous vote. Since his busy life allowed little time to manage Allentown himself, he delegated the responsibilities of running it to the people he trusted most. At times, however, he would make the 60 mile journey from Philadelphia to Allentown, eventually justifying the need for his own house. He decided to build a two story stone house, which he called Trout Hall, after the abundance of game trout along the various creeks and the Lehigh River that surrounded Allentown. An entry in James Allen’s diary gives an exact date on when the name was decided upon. November 6, 1770: “Two days ago I returned from Trout Hall (a name I have just given my house) where I had been with Mr. Lawrence, my brother Billy and Jenny Tilghman.”

Upon completion of the house in 1770, James Allen took his family there to view it and the surrounding Lehigh valley; they immediately fell in love with the new peaceful retreat. However, this tranquil feeling would not last long, for the Revolution was approaching and James’ allegiance was to England. In June of 1775, he mentions in his diary that twice a week he would have to dress in his uniform and fall in with the battalion. In 1776, as James’ objection to the war continued to grow, he and his family escaped to Trout Hall, hoping to ride out the rest of the war. This proved impossible, however, for the war raged throughout the entire country. At times, the American soldiers doubted James’ trustworthiness; they believed he was a spy because he entertained British POWs at Trout Hall. Regardless of his loyalty, however, on November 13, 1777, on his way to Boston, John Adams stopped by Trout Hall to inform James that independence was final and there was nothing that could be done. In 1778, with help from George Washington, the family traveled to British-occupied Philadelphia so his expecting wife could have her baby near her family. While in Philadelphia, James Allen died of tuberculosis on September 19, 1778. In one of his last diary entries, he wrote of how he longed for his accommodations at Trout Hall. After he died, his wife remarried and his daughters became frequent residents at the idyllic retreat. 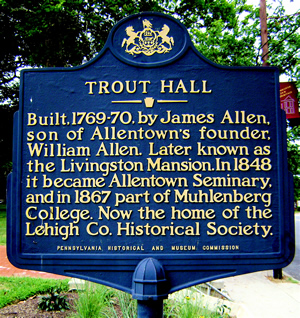 Matthew R. Hengeveld
Recognized as a landmark, Trout Hall continues to anchor the community of Allentown.

On May 17, 1789, James’ daughters left Allentown. Trout Hall would hold no residents until the winter of 1825. James’ eldest daughter, Anne Penn Greanleaf, gave a few blocks of the original property where Trout Hall was situated to her daughter. It was at this time that the name Trout Hall was dropped and in its place was “The Livingston Manor,” after Walter Livingston, the daughter’s new husband. Livingston lived in Philadelphia at the time they were given the house. Because of his hectic life as a successful businessman and State Senator, the couple did not get much use out of the house. In 1847, when a business deal went bad, Livingston sold the house and property to make up for his lost profits. The new owner, Comegys Paul, followed suit, selling the house a week later for profit as well.

The house was now owned by Christian Pretz and Henry Weinsheimer who, after many years of planning, were able to open the Allentown Seminary on May 1, 1848. The Seminary, a school for boys, taught subjects such as math, English, German, and drawing. During its first year, 32 students attended the school. Three years later, however, in 1851, the number of students had drastically increased to slightly more than 200. Because of this increase, the house needed to be remodeled. A third story was added, along with a west wing. These additions gave the Allentown Seminary more space for students and room for up to 100 boarders. The quiet vacation home of James Allen had now morphed into the home of 100 students and the school building of many more than that.

In March 1864, the Allentown Seminary was chartered by the Legislature as the Allentown Collegiate Institution and Military Academy. Throughout its existence, the school only had one president. When he resigned, the Academy was forced to close on June 16, 1868. The Evangelical Lutheran Ministerium of Pennsylvania then assumed partial control and it became the original site of Muhlenberg College, a private liberal arts college still located in the city.

On January 9, 1904, the Lehigh County Historical Society was founded to find and restore historical landmarks in the Lehigh County. The organization claimed that Trout Hall was a historical landmark and should be recognized and distinguished from the university. Their goal was to preserve the home’s past and one way the Society planned to do this was to restore the east wing that had not been touched in decades. One year later, in 1905, Muhlenberg College relocated its campus. After nearly 100 years, the house became Trout Hall once again.

Matthew R. Hengeveld
Trout Hall has been home to the Lehigh County Historical Society for many years.

Today, Trout Hall functions as a real life example of what life was like in the past. Used now as a museum, it houses revolutionary artifacts for the public to view and also showcases its antiquated style of architecture. Visitors interested in viewing the historical landmark can explore the house between April 1 and November 30, and they may also go on tours provided by the Lehigh County Historical Society.

Looking at the house now, as it stands facing a busy road with its drone of cars, it is hard to imagine it as the once picturesque and peaceful home of the Allen’s. The city of Allentown has grown around Trout Hall, shrinking what used to be hundreds of acres of land into what is now just a small square of grass. But for well over 200 years, the house has stood as a site of relaxation and revolution, lodging and learning. Now, as a museum, Trout Hall will be there to remind visitors of the past well into the future.