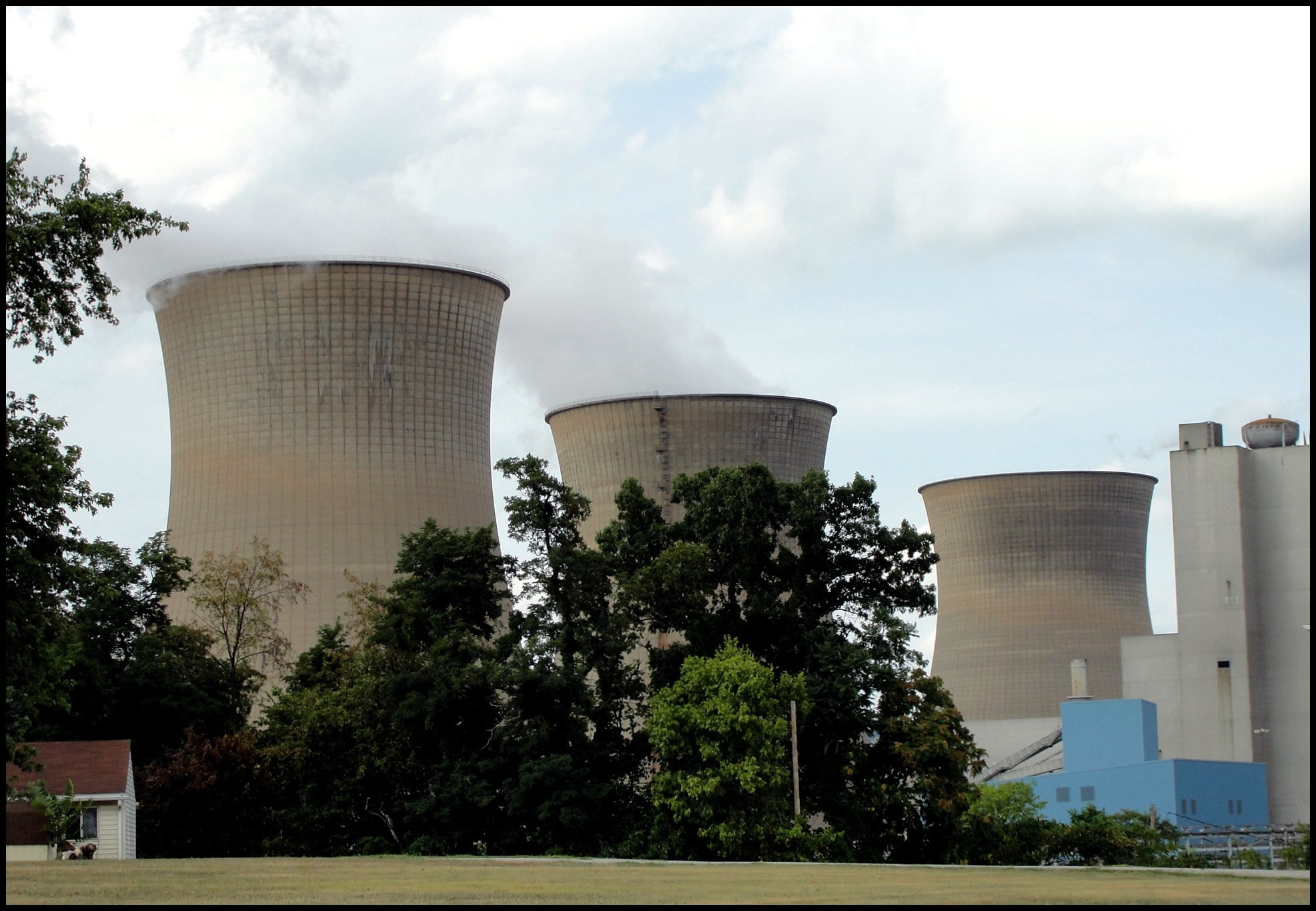 On August 6, 1945, the United States detonated the first atomic bomb over the city of Hiroshima, Japan. The resulting deaths of tens of thousands of Japanese people, many people around the world recoiled in horror and fear of the technology responsible. Nine years later, in 1953, President Dwight D. Eisenhower went before the United Nations to discuss his vision for the future of nuclear technology—a future that did not include detonating another bomb.

Against the dark background of the atomic bomb, the United States does not wish merely to present strength, but also the desire and the hope for peace… the United States pledges before you, and therefore before the world, its determination to help solve the fearful atomic dilemma - to devote its entire heart and mind to finding the way by which the miraculous inventiveness of man shall not be dedicated to his death, but consecrated to his life.

The Shippingport Atomic Power Plant, built in 1954, signified Eisenhower’s follow-through on his promise to alter the use of atomic technology for peaceful rather than military purposes. This plant was the first large-scale commercial nuclear power plant in the United States, built just 40 miles from Pittsburgh in Beaver County.

At this time, nuclear reactor design for energy generation was in its beginning stages, and was being developed for naval applications. Westinghouse Electric Company was one of the fore-runners in reactor research and design, collaborating with the Argonne National Laboratory to develop a nuclear reactor for powering submarines. However, after Eisenhower’s “Atoms for Peace” speech, the focus of nuclear energy shifted towards land-based energy production. Essentially, naval technologies were simply expanded and put on land. To meet the financial needs for a successful U.S. nuclear program, the government accepted a bid from the Duquesne Light Company to be a private partner on the project. 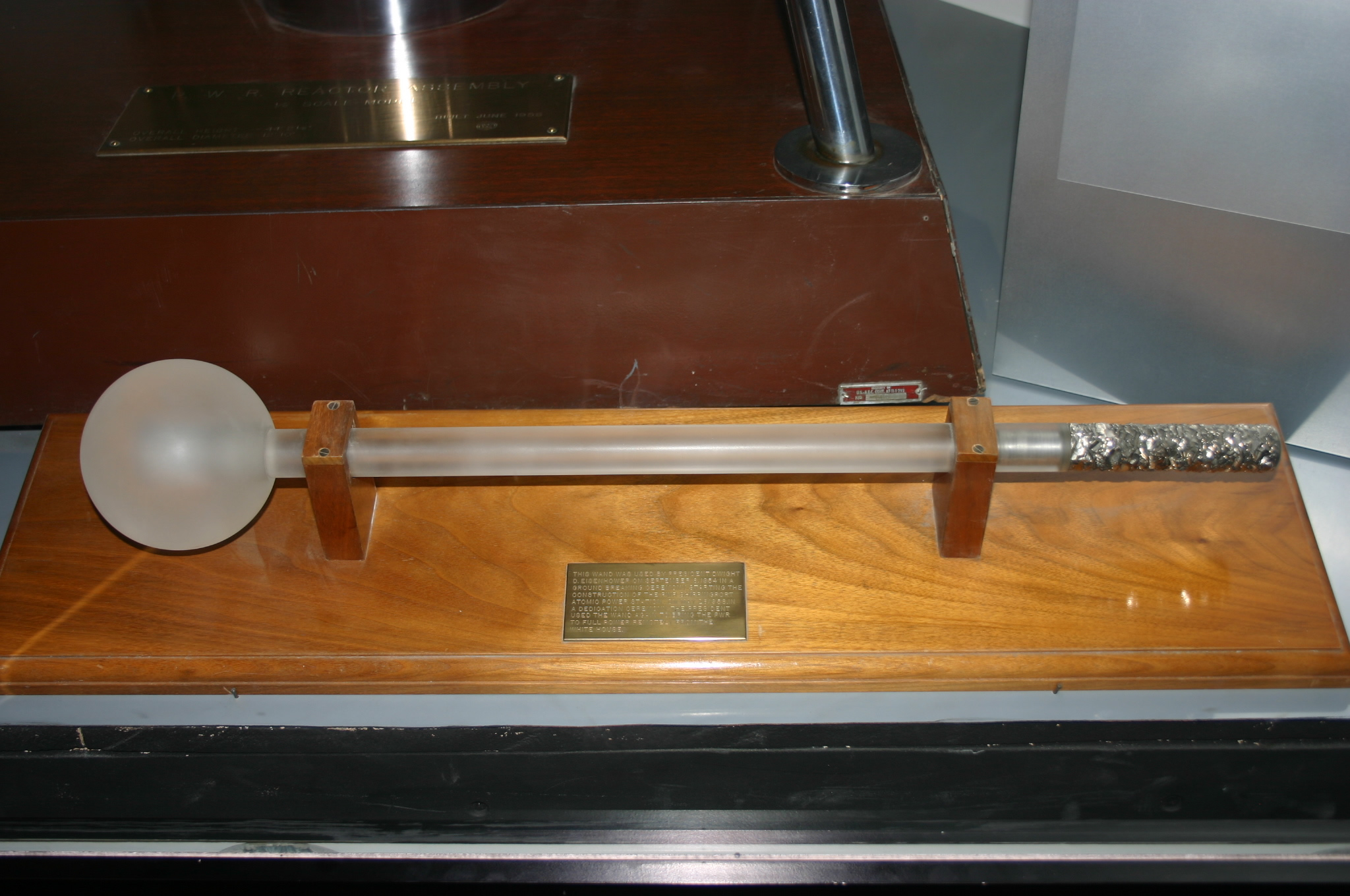 Ryan Somma
The wand that transmitted President Eisenhower's signal to begin construction of the Shippingport Plant at the American History Museum.

The construction of the plant began as if by magic, with the waving of a wand. On Labor Day of 1954, President Eisenhower waved a neutron wand over a neutron counter in Denver, Colorado, sending an electrical signal 1,200 miles to Shippingport, Beaver County. This signaled backhoes to begin construction. Philip A. Fleger, chairman of the Board for Duquesne Light, the utility company for the project, said to the National Historic Mechanical Engineering Landmark Program that “It is altogether fitting that this station should be located close to the birthplace of the petroleum industry and almost on top of one of the world’s greatest coal fields.”

Originally, the Shippingport plant was built as a pressurized water reactor (PWR). This type of reactor uses two separate piping systems of water to absorb heat generated by a nuclear fission reaction; the steam produced is then used to power a turbine, creating electricity. The nuclear fission reaction takes place in the nuclear core. Thirty-two neutron-absorbing rods control the speed and extent of the reaction, therefore controlling the amount of heat generated. This heat is absorbed by the first piping system containing highly-pressurized water; the pressure prevents the water from turning into steam. The heated water then enters a heat exchanger, where it transmits the heat to a second system of pipes also containing water. Because this second system is not highly pressurized, steam is produced. It is then used to turn a main turbine, generating electricity.

The Shippingport reactor was developed as an experimental facility, with flexible capacities and design elements to allow the industry and government to study how an electricity-generating reactor worked. Philip A. Fleger noted that “Shippingport will be a university, so to speak, for the electric power industry of the country.” The nuclear reactor was able to contain different types of cores that utilized various materials and designs. In addition, the facility contained extra experimental equipment used to test and monitor the system. This gave scientists the ability to explore different nuclear designs on a large scale. 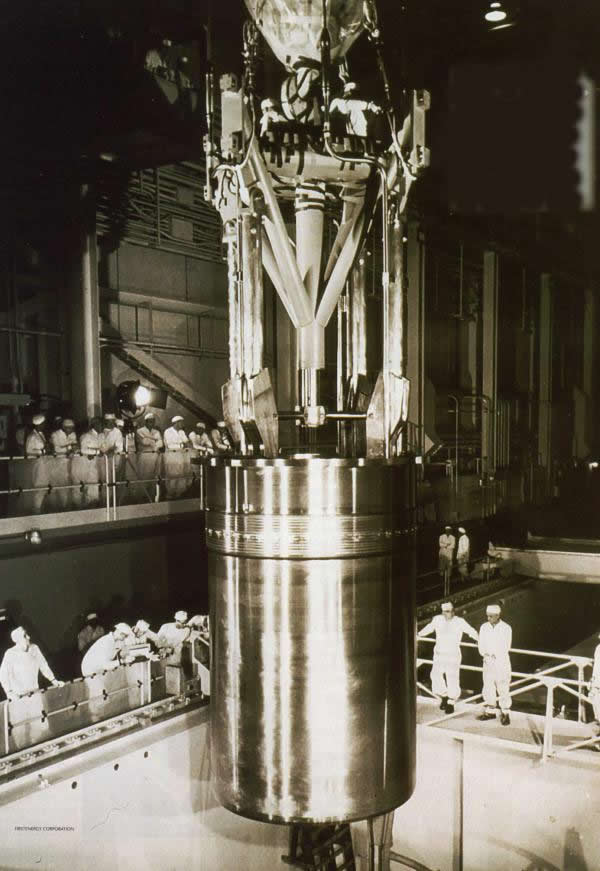 First Energy Corporation
The core of the reactor being lowered into place.

In 1964, this flexibility was put to use when a second core replaced the old one. It was able to produce over twice the power as the first core, and increased the electrical generation capacity of the plant from 68,000 kW to around 100,000 kW. The design of the power plant was again altered in 1977, when the core was changed to a light water breeder reactor (LWBR). A breeder reactor uses both thorium and uranium as a fuel source. As the reactor consumes uranium, it produces more uranium from thorium as a by-product. The reactor is designed to produce more uranium than it uses, allowing the plant to use thorium, which is a cheaper and more abundant fuel source.

The flexible, experimental design of the Shippingport reactor allowed U.S. companies and scientists to study and explore different technologies that could later be implemented at a commercial level. By itself, Shippingport was an expensive reactor, costing $79 million to construct, and high operating costs. In fact, it produced electricity at ten times the price of typical coal plants of the day. Despite this, the information and technology learned from the facility was invaluable, providing American as well as international scientists and engineers with knowledge that has helped the nuclear industry develop into what it is today.

However, the nuclear industry took a major step back in 1979 with the Three Mile Island accident—the worst nuclear accident in American history. It occurred when a reactor located near Harrisburg experienced mechanical failures in its cooling and back-up cooling systems, resulting in a partial core melt down. In reaction to potential radiation emission from the facility, 140,000 people were evacuated from the area. Although scientists have shown that no excess radiation was actually emitted into the surrounding areas and there is no proof of negative effects on the regional people, this led to a general mistrust of the technology. In a TIME magazine article, Robert Holt, a psychologist that has studied the emotional fall-out of the incident, noted that: “Significant portions of the population were emotionally shocked by the accident, believe that they have been or will be harmed by radiation, and feel threatened by Three Mile Island.”

After the Three Mile Island incident, the public began to question the safety of Shippingport. Increased radiation from coal of the near-by coal plants and the presence of cadmium, a carcinogenic element, were blamed on the nuclear reactor’s presence.

In 1982, the Shippingport reactor went off-line and began its decommissioning a year later. The disassembly of the reactor sparked much controversy over storage of the highly radioactive fuel rods and the reactor’s cylindrical hull. When deciding where and how to store the material, the “not in my back yard” mentality grew as citizens protested the placement. The reactor was shipped intact down the Mississippi and Ohio Rivers, through the Panama Canal, and back north again to Washington State where it was finally buried at the Hanford Military Reservation. 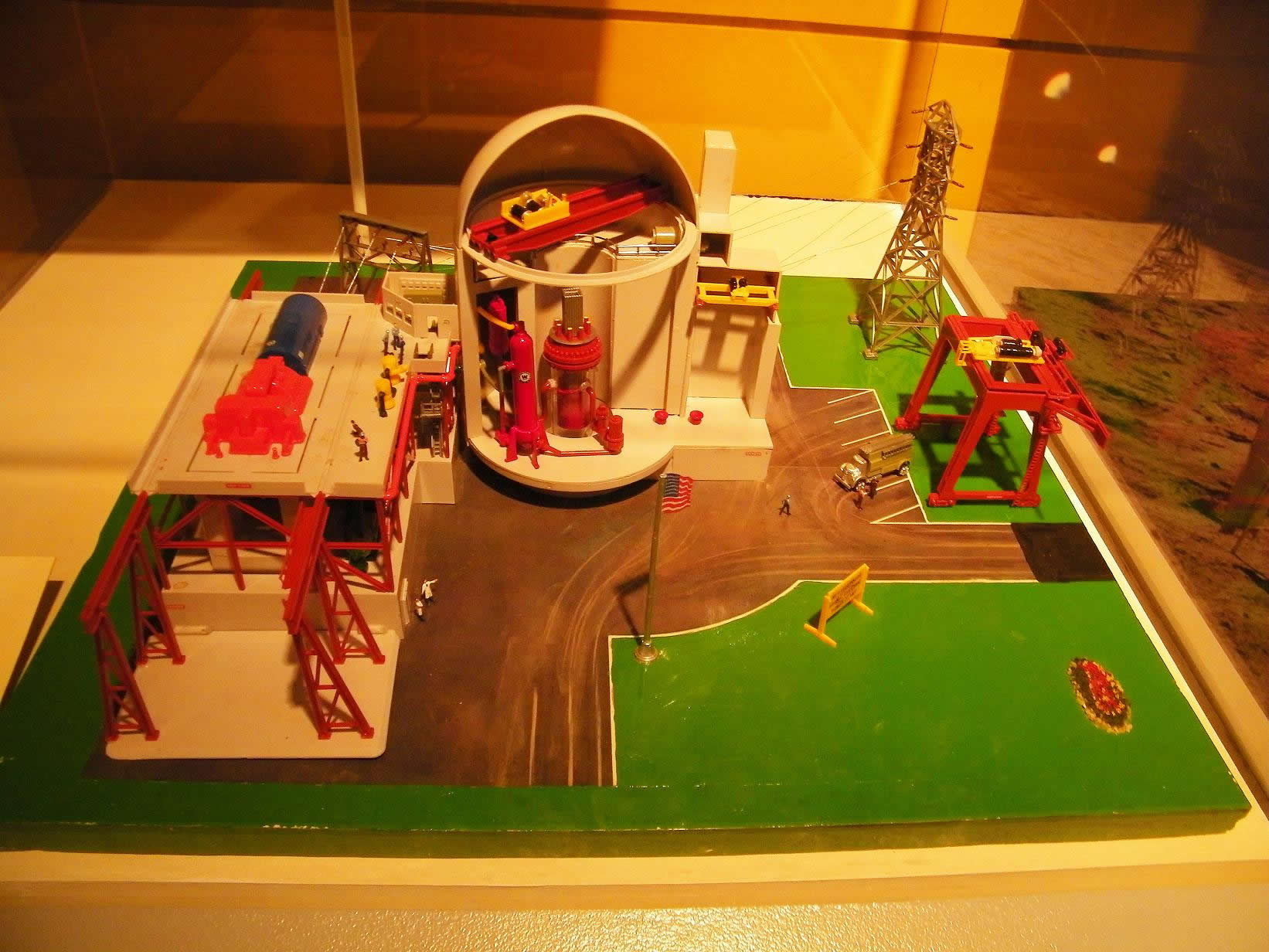 Mark Hellekjaer
Models like this one helped to ease fears about the nuclear plant in the area.

Shippingport was the first reactor to be taken apart and proved that reactors could be successfully removed. But the Shippingport decommissioning was not an accurate depiction of future disassembly. Because Shippingport was a smaller facility, experts, such as Michael Pasqualetti of Arizona State University, cautioned that later reactors could not be shipping whole as this one was. The nuclear reactor is one of the more contaminated pieces of a power plant and cutting it apart is releases high radiation. While this radiation did not occur during the move of Shippingport’s reactor, the particular moving process would have little benefit for the decommissioning larger commercial reactors.

Today, the United States has 104 nuclear reactors generating 800 million MWh of electricity, accounting for 19.0% of the United States’ total energy generation in 2000. Energy provided by nuclear reactors is cheap and steadily priced, unlike those of oil and gas. Because of this, many, such as Westinghouse Electric, have been looking in recent years to investing further in nuclear power to offset our dependence on foreign oil.

Despite this, no new nuclear reactors have been ordered since the 1970’s. Many of the issues surrounding construction of nuclear reactors are the high construction costs, long building times, and changing regulations. Watts Bar-1, the last nuclear reactor to begin operations, was completed in 1996 and took 24 years to build. Although most plants do take less time to construct, the changes in industry regulations during this period and the construction costs discourage companies from building more. The U.S. Energy Information Administration predicted in 2003 that no nuclear units would come online between 2001 and 2025 and so far they are right.

The Shippingport reactor existed in a tumultuous time as the nation searched for the creation of a new technology—a technology that would provide clean energy to the city of Pittsburgh and help innovate the nuclear energy industry. Nuclear power’s end is far from near, as the world searches for more efficient energy sources.

The Center wishes to thank First Energy Corporation, Rob Matheny and Mark Hellekjaer for their assistance illustrating this article.